“We Just Have To Go One Gentle Step After Another”: Members of England’s The Space Arts Council On Embracing New Digital Platforms at IFP Week 2018 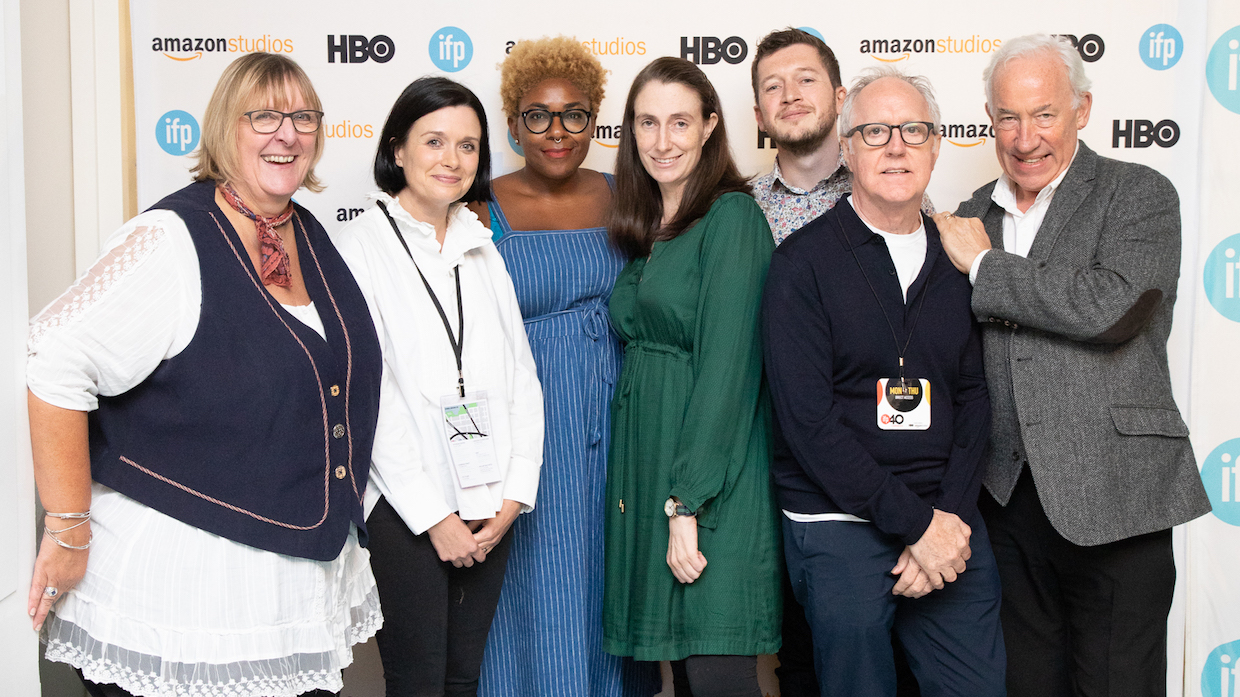 Panelists from The Space

To be in the arts right now is to be excited and scared, often at the same time. The old ways are dying, but no one actually knows what the new ways even are. There’s so much potential in the digital landscape, but it’s unclear how it can be used—to find audiences, to fix old (and new) problems, to maybe even make money. These are issues that consume those involved with The Space, an English arts council set up at the BBC not only to fund art but to find new ways to get them out into the world.

“There are beautiful pieces of art out there that have been published online that no one knows are there, and that’s just sad,” said Fiona Morris, chief executive and creative director of The Space. “If you’re an artist and you want to make a piece of art, you don’t want to ask, ‘Who’s the audience for this?’ But now—I’m sorry, you have to.”

Morris attended IFP Week 2018 along with a quintet of The Space’s most exciting projects, speaking on a panel called “Classic Stories for New Platforms.” The real focus was much broader: taking stories created for one medium—one that might be limited now, in terms of how many people it can reach—and re-inventing them for another. In each case, they were embracing emerging art forms, often including an element of the interactive.

The Space was born six years ago, when the BBC wanted the arts sector to come to terms with digital. That wasn’t that long ago, and yet YouTube did not yet have millions of channels, Instagram didn’t yet exist and Facebook didn’t have video. Morris and those at The Space realized over time that the old methods would not work. And yet new technology could help arts organizations broaden the scope of their work and find ways to engage with audiences, in ways that will maybe even benefit both sides: Art can be funded because more people can see it.

“The proliferation of online production has transformed what the landscape looks like for cultural institutions,” Morris said. In the old days — of even five or three years ago — unless you were involved with a high profile institution, you probably weren’t going to get much attention, or funding. You certainly weren’t going to wind up on a widely-viewed screen. “If you were making work in the context of opera or dance or theater, you were a pariah to the television schedule, because your work didn’t sit conveniently into half-hour or 60-minute slots. That’s completely changed now, with the option to create work to be published online.”

The most traditional Space production on display, in more senses than one, is Tom Cairn’s A Christmas Carol. For one thing, it’s the umpteenth adaptation of a stone-cold classic. For another, it’s a film, and it will play movie theaters. But there are many things that make Cairn’s version special. For one thing, there’s the fact that it’s a one-man show, peopled only by esteemed actor (and Orson Welles biographer) Simon Callow. When they first performed it onstage, Callow performed every character. But perhaps most importantly, he also spoke Charles Dickens’ prose—the most distinctive and rich voice in the book of all.

“Right from the beginning, we felt there was extraordinary cinematic potential,” Callow said. “But we were particularly keen not to do it as a piece of transmitted theater.” So it was relocated from a bare stage, populated only one actor and a dozen chairs he moved about throughout the production, to an abandoned warehouse.

But that wasn’t enough. He and Cairns wanted to seize upon the idea of film as an intimate space. “The crucial thing was to get that sense of the narrative voice—of the writer, with me as his surrogate, engaging, in a direct way, with the audience,” Callow said. “The ability to climb inside an audience’s head, that’s what we were interested in. Film, of course, allows you to do that infinitely more [than theater].”

When The Space approached them, they wanted to take that idea even further. They suggested adding binaural sound to the film. “It’s kind of surround sound on acid, the virtual reality of sound,” is how Cairns described it. He used it primarily for off-screen voices, all played by Callow. Cairns’ A Christmas Carol will open on 400 screens over the holidays, in addition to getting a TV run. (The stage version will also return.) But to get the full effect, you need to see it on a big screen with great sound.

“It’s quietly radical by the sheer space it takes up and the attention it demands,” said the show’s director, Natalie Ibu. So when it was decided to turn this large stage show into a movie—to grant good dog a wider audience—they had to completely re-envision it. In fact, when it’s finished, it won’t be one film but a series of films, breaking down the play into easily-digestible segments.

So far the good dog films feel very different from the show, not the least because there are multiple actors—including three for the protagonist himself—and fast-paced editing, fleshing out stories and observations that were once only oral.

“When you move into a new form, those things that gave it edge, made it subversive, no longer hold the same currency,” Ibu said. One thing that worried them was how to get the audience involved. “Watching that one actor over 2 ½ hours is a community effort. You want him to get to the end, because it’s quite an Olympian effort.” That’s simply not going to happen over a series of short films. Ibu and her company tried to make it so the audience has to figure out what order the films, which can be viewed in any order, come in: “You’re sort of a detective who pieces together these narratives.”

When it was first conceived, The Boy in the Book was interactive theater, blending audience participation with video. It’s the story of a young man named Nathan finding the 20-year-old diary of an orphan, then trying to find his whereabouts. In a presentation, the audience would vote on where Nathan goes next, à la a Choose Your Own Adventure book. When the team behind, including producer Russell Stearman, decided to make an online version, that meant completely reframing the approach.

For one thing, in the online The Boy in the Book—which is still in the works—participants aren’t trapped within a set time. There’s no guide present, no big audience, just one person in front of a computer. That means they can explore what they like for how long they like. One thing this does is turn the show into a fascinating study of how people behave in public versus in private. In the stage version, you’re in a group, and you’re aware that how you vote will affect other people. There’s none of that in the digital Boy in the Book.

“There’s a social dynamic that plays out there that simply doesn’t play out when you’re doing it by yourself, where you can think, ‘I’m just going to go do this awkward thing,’” Stearman said. “You hear stories where people are playing games or doing online activities, and it leads to those horror cases of people abusing systems because they’re on their own, with no sense of social responsibility.” To lessen that, Shearman and his team have kept the fictional characters within the story, to give participants the illusion that they’re not alone. “Even though they’re not real, you still get a camaraderie with Nathan, a sense of social inclusion with these characters as well.”

For the Stopgap Dance Company, film can be a way not only to document and preserve performances but to get them seen at all. Stopgap are “inclusive,” meaning they attract performers with various disabilities. Unusually for an inclusive dance company, they also have performers without disabilities. Unfortunately, some members of their company have tour limitations. So it made sense to make Artificial Things, a forthcoming film of their dances that is being directed by Sophie Fiennes (Grace Jones: Bloodlight and Bami).

“There are things you can do online that you can’t do in the live context,” said Morris. Dance particularly lends itself to digital viewing—at least in theory. In practice, the majority of regular people wouldn’t be caught dead watching a contemporary dance piece. Morris has a strange story: Not long ago, The Space had a dance piece from another company that was involved with the Ministry of Defense. They worked out a deal that a video of the dance would be shown not on television but on the army’s Facebook page. When it streamed, it reached people watching it by accident. Some 30,000 people watched it live, and 70,000 saw it total. What’s more, one could track the reactions in real time, in the comments section.

“A third of them were incredibly positive. The other two-thirds were what you’d expect,” recalls Morris, citing comments about the government wasting money and the female dancers’ appearances. But those comments didn’t necessarily horrify her. She was fascinated that people were talking at all. “I thought, ‘Okay, guys, you didn’t enjoy that. But you sat and watched 20 minutes of contemporary dance and you discussed it with your colleagues. You would never walk through the doors of a theater to watch that.’

“As far as I’m concerned, that’s what culture is about,” Morris added. “We’re not here to be liked or loved. We’re here to provoke debate and create dialogue between audiences about important universal themes.”

Of course, what comes next? No one really knows, though this question is one that drives The Space. “Once you’ve jumped up and down and gotten everyone’s attention, the worst thing you can do is not pay attention to them,” Morris explained. “You have to come up with a new set of dialogues and a new set of content. You have to find a way to make it financially sustainable.”

That said, you can’t simply give people what they want. And you can’t always trick them into watching what you want them to watch, as in the case of the army dance Facebook video. But there may be a way for arts organizations to build communities, to build a fanbase, and maybe even ensuring funding over the future.

That said, the digital landscape is still new, both to those who use it to connect to people and to the people using it. That hasn’t stopped those in power, in government or elsewhere, from thinking they know how it works.

“There are those in government who think, if they put something online, they’ll start making lots of money,” Morris said. “I just go, ‘Can we pause a moment? Let’s build a profile and some identity first. Then there will be an audience.’ We’ve already proven that. Some of our projects have hit massive numbers. We just have to go one gentle step after another, rather than break the model because everyone’s asking, ‘Where’s the money?’”