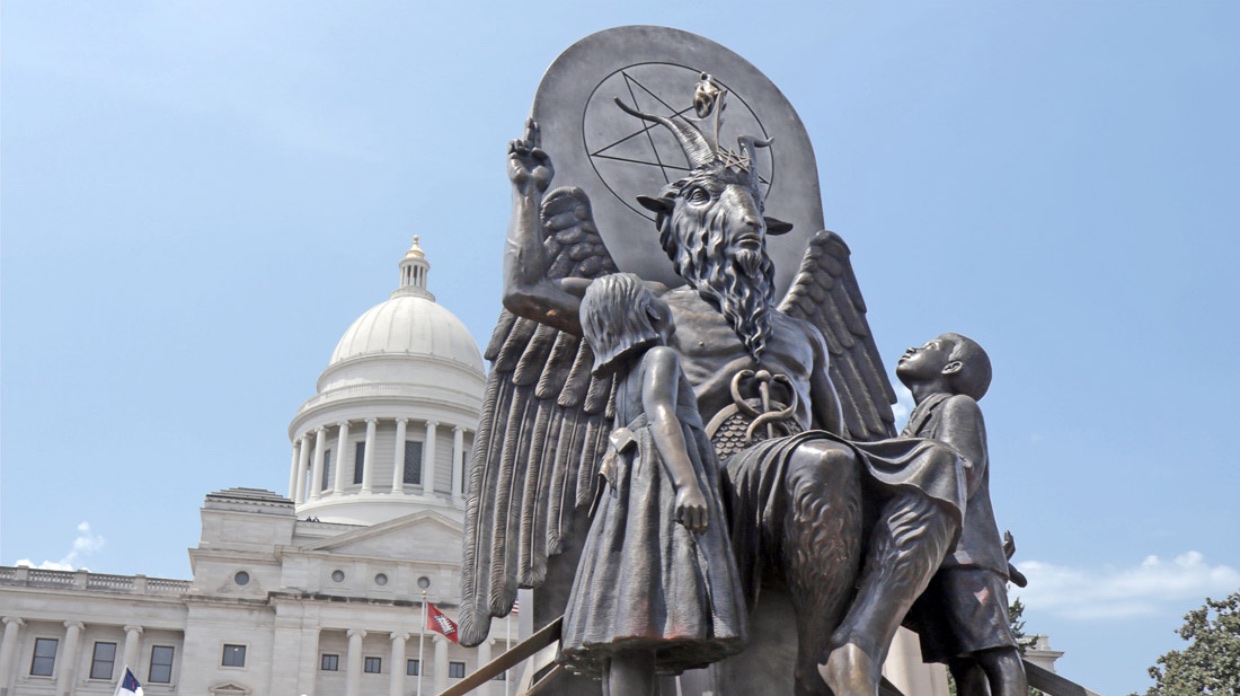 “Blasphemy is not free speech” reads a protest banner on the Little Rock statehouse lawn in a scene from Hail Satan?, the latest from Sundance vet Penny Lane (Our Nixon, Nuts!). The sign is emblematic of the ludicrous (and too often unchallenged) falsehoods that The Satanic Temple — fighting to place an elaborate statue of goat-headed god Baphomet alongside a local legislator’s equally ostentatious Ten Commandments monument — is up against. Luckily Lane, never one to shy away from provocative subjects, is right there on the ground, providing an intimate look into the group’s wild rise.

By seamlessly alternating interviews with members of the Salem, MA-based “nontheistic religious and political activist group” (think The Yes Men of religious pluralism, but with a punk rock flair) with a vast amount of startling historical footage, the notion of what it means to be a “Satanist” is upended in every frame. As The Satanic Temple tackles our nation’s oppressive Christian supremacy — in a manner not unlike other modern-day nonviolent movements such as Occupy, which challenged the supposed “bedrock American value” of capitalism — Lane herself uncovers and obliterates every diehard assumption we might have. (That Ten Commandments monument? Birthed quite unbiblically in a Paramount Pictures publicity stunt.)

Lane spoke with Filmmaker about what just might be the “least experimental” of all her works prior to the doc’s January 25th Park City premiere.

Filmmaker: The film’s producer Gabriel Sedgwick brought this project to you. Were you at all wary of working on something you hadn’t initiated yourself?

Lane: Not at all, at least not in this case, because it wasn’t as if Gabriel had already set it all up and was just looking to plug in a director. He really just emailed me a couple of articles about The Satanic Temple and said, “What do you think?” And I said, “Hell yes!” And then we did all the initial outreach and introductions together.

The thing I want to say about this is that Gabriel and I already wanted to work together at that point because we had the sense we would get along well and had similar ideas about art. And it was really only in collaboration with him that I could imagine taking this project on. There was no way I could handle the logistics of such an ambitious production alone, especially given my near-total lack of experience shooting in the field. Gabriel brought to Hail Satan? all the production experience and knowledge I lacked. Plus he knew a lot more about black metal.

Filmmaker: I was surprised to read that this was the first film you’d ever directed in which you didn’t go into production knowing the story from beginning to end. Which made me think that your own process might be closer to that of a fiction filmmaker than a documentarian. So did you find yourself more “in the moment” with this film, letting go and following the story as it unfolded — or was the loss of control just nerve-wracking?

Lane: What I mean when I say that is not that every beat is all worked out in advance or something, but that I at least knew how it ended, because the stories I have done before were historical. They were stories from the past, not unfolding in the present through production. So when setting out to tell the origin story of The Satanic Temple I had to follow the action, which isn’t something I’ve really had to do before. It was very hard for me, but I never lost sight of my artistic goals going into it either.

I often think of the director’s job as setting and keeping the overall direction of the ship. And of course you tack left or right depending on the prevailing winds, but you have to know where it is you want to go. That can change, but if you’re going to completely change direction based on the weather you’ve got to at least do it consciously!

My artistic goals were to explore the lines between performance and authenticity, pretense and sincerity, belief and reality — and to situate The Satanic Temple within a much longer story about the fraught relationship between church and state going back to the founding of the United States. I would say the biggest pressure to depart from that course was that there was a lot of, let’s say “drama.” There was and is a lot of interpersonal conflict within the Temple — including some high-profile chapters leaving The Satanic Temple, and a controversial lawyer that was hired, and all kinds of accusations and callouts left and right. And it was all at least sort of important, and at least sort of interesting, and we filmed a lot around those conflicts. But ultimately my artistic goal was not to make a “portrait of an organization struggling to cohere in the specific cultural moment of 2018,” so it all got left out.

Filmmaker: There’s a fascinating contrast between your “radical” subject matter and an almost traditional filmmaking approach — talking head interviews with members of The Satanic Temple as well as authors and academics, footage of protest actions, etc. This seems to me the least experimental of all your films. Was this a product of your collaborators’ influence? The result of working with a bigger budget?

Lane: I do think this might be the least experimental of my films, at least until you get back to The Abortion Diaries (2005), which was also pretty formally straightforward. This isn’t the product of anything other than what I set out to accomplish — which was to take this extremely misunderstood, offensive, radical subject matter and render it coherent, rational and even relatable. It wasn’t as if I had some avant-garde film about Satanism in mind and had to throw it away due to the expectations of others. Hail Satan? is the film I wanted to make from the beginning, and all of my collaborators — including Magnolia who financed the film — were completely on board.

Filmmaker: You weave a wealth of visually compelling archival images throughout the doc — everything from a Garden of Eden cartoon to newsreels from the “Satanic panic” of the ’80s. But you also use your own real-time footage and interviews. (I thought it interesting that the only filmmaking “rule” co-founder Lucien Greaves had for The Satanic Temple’s cooperation was a refusal to do reenactments.) How did you figure out the structure so it all flowed seamlessly?

Lane: Thank you for asking this question because it’s my favorite part of the process. (Yay editing!) The short answer is I worked with two editors on this film, Amy Foote and Aaron Wickenden, and they deserve all the credit.

The longer answer is, Amy started cutting in April 2018. With Amy I focused on big-picture structure, which was good because in April we had only filmed about 25% of what we ultimately filmed. By the time Aaron joined us in August we had a pretty clear idea of the beginning, middle and end. I was also very clear on the themes and style of the film, and we had almost finished shooting. So August through November was a very fun and intense period of cutting. It was an unbelievably great experience for me, really one of the highlights of my artistic life, when all those pieces started clicking together so fast. Aaron and Amy would delight me every day.

Filmmaker: During filming a tactical rift developed between The Satanic Temple leadership and Jex Blackmore, the woman who headed the Detroit chapter. Did this affect production in any way? How do you navigate a situation in which your main characters are suddenly at odds with one another?

Lane: It affected production in the sense that it was a big part of the story we were telling, and it’s represented in the film. It was challenging, and I would even say heartbreaking in many ways, but I cannot stress enough how understanding, savvy, kind and respectful both Lucien and Jex were throughout this whole process. I think they understood I would do my best to accurately portray the conflict. I personally have a huge amount of respect and admiration for both Jex and Lucien, and there’s no doubt that The Satanic Temple would not be what it is without both of them (and so many other people). So it wasn’t as if I was picking sides or something. (Of course there is much more to the story. Anyone who wants to get into the uglier and more painful aspects of it can ask our friends at Google.)

Filmmaker: It struck me that The Satanic Temple has about as much in common with traditional Satanism as their loathsome opponents at Westboro Baptist have with Christianity. Since you’ve explored the idea that we craft realities in service to our beliefs — a major theme of 2016’s Nuts! — did it bother you that The Satanic Temple might just be “manipulating” Satanism to serve their, albeit laudable, political agenda?

Lane: They are Satanists and I am not, so I certainly would never worry about them somehow “manipulating” Satanism. I think you have to take people at their word, and the Westboro folks are Christians just as much as The Satanic Temple are Satanists.

But I think the part of your question about how we craft realities to serve our beliefs is super central to this film. Given my long-standing interest in that issue — which I think of as, like, only the most important social issue of all — it was really only a matter of time before I turned to religion as subject matter.

What I find so interesting is the transformation of belief into reality. This is also so central to activism, right? We imagine a world we want to inhabit, and then work to create it. With religion, there’s also this question of sincerity that is fascinating. If you do the rituals, say the words, put on the clothes, do the gestures — you’re performing, yes, but you’re also practicing. What else does it mean to practice your religion other than to engage in these ritual behaviors? I started to think of religion less as a list of beliefs and more as a matter of practice. How do our beliefs manifest every day into reality — into how we treat other living beings and ourselves? The fact that the Satanists get so much grief for somehow not being authentic and sincere is, to me, mind-boggling — and evidence only of prejudice against a marginalized group, and a misunderstanding of what religion actually is.