Editor Johanna Giebelhaus on Toni Morrison: The Pieces I Am 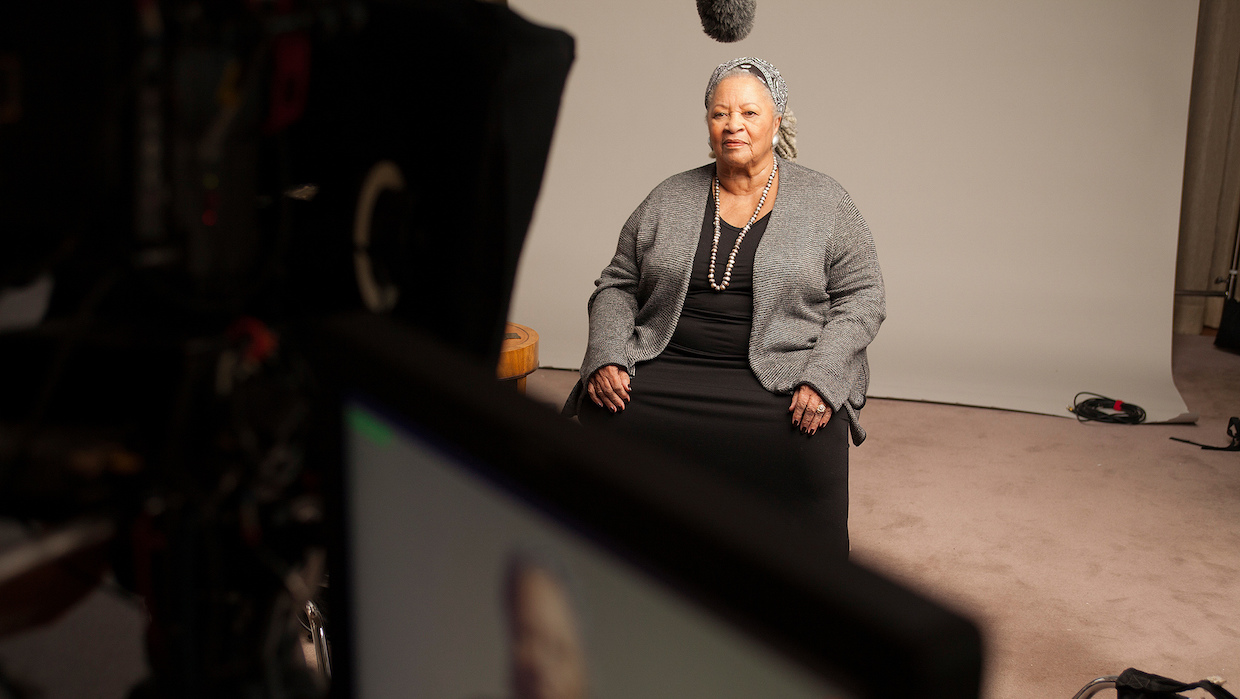 Ton Morrison in Toni Morrison: The Pieces I Am (photo by Timothy Greenfield-Sanders)

by Filmmaker Staff
in Editors, Interviews, Sundance
on Jan 30, 2019

Drawing on his longtime friendship with the legendary novelist, photographer and documentarian Timothy Greenfield-Sanders’ Toni Morrison: The Pieces I Am paints a full, intimate portrait of her life and work. An assistant editor since 2000 whose first credit as an editor came in 2003, Johanna Giebelahus helped shape the copious material onhand. Via email, Giebelhaus spoke about the process of shaping a whole life into a documentary package.

Giebelhaus: Toni Morrison: The Pieces I Am is the second film directed by Timothy Greenfield-Sanders which I’ve edited. I edited The Trans List in 2016 for HBO, which was the most recent installment of Timothy’s “List” film series. Working with Timothy on The Trans List gave me important experience with his signature filmmaking style, which would later inform his Toni Morrison film. The success of The Trans List helped build trust for an important creative relationship. Toni Morrison trusted Timothy because of their 30-year friendship, and Timothy trusted me, bringing me on board for all of Toni’s interviews and filming. All of this positive connection and early interaction with Toni was essential for the filmmaking. My previous experience editing intricate long-form documentary films, my ability to tackle their unique structural needs and take command of archival research, combined with knowing Timothy’s style, made me the right choice for the job.

Giebelahus: Bringing out as much emotion from the narrative was my overall goal with the later cuts. Finding the natural rhythms and audio visual connections among the assembled interview scenes and the organic spaces in Toni’s storytelling were key elements for making the cut work on a deeper level. Pauses are an important part of Toni’s language, both in her writing and spoken voice, and I wanted to preserve these spaces wherever possible to take in emotion and emphasize certain statements or moments. Lyrical rhythm and repetition—whether it be repetition of words, or phrases, or a riff on an idea or a symbol such as “melting pot”—are also central in Toni’s style, so wherever possible I hoped the film could honor and connect to this rhythm. Incorporating the vast archive of archival photographs and footage was a really exciting part of the process of connecting all of the themes and enabling these contemplative spaces to emerge. Using temp music helped me tease out these layers, and then, working with our incredible film composer Kathryn Bostic, we were able to take the cut to an even deeper emotional level, giving room for emotional commentary and reflective spaces that often answered Toni’s powerful statements or turns in her biographical narrative. Once we locked the palette, which was rootsy and jazz, we had instruments such as the fiddle and the upright bass to signal and connect these spaces.

Giebelhaus: Toni Morrison’s career as a writer, teacher, and editor is just remarkable. For five decades of her career, she’s had an incredibly active and generous public life, giving fascinating interviews and speeches all over the world. Having the opportunity to review as much of these as I could get my hands on was inspiring and really influenced the filmmaking. I was intrigued by the idea of editing Toni’s interviews at different ages together, so threading them together thematically and putting them right next to each other or talking to each other was an early technique I wanted to try. I did some tests along these lines early on and showed them to Timothy, who thought it was effective and interesting. This led me to digging through the dailies and outtakes on Timothy’s film The Black List that Toni was also interviewed in. With this material, I then had archival interview material from Toni in her 40s, 50s, 60s, 70s, and 80s! In screenings along the way, I paid close attention to responses we got from these archival interview elements in the film and was pleased by the response to the material.

Giebelhaus: I was an assistant editor on documentary films and television for years. I took pride in keeping multiple cutting rooms organized and running smoothly. I had the opportunity to work with so many fantastic editors, producers, and directors and learned so much about filmmaking, storytelling, and post-production workflow. As hard as it was to transition from assisting to editing, I’m really grateful I paid my dues as an assistant editor and had the opportunity to really absorb and learn the craft and process.

Giebelhaus: I work on Avid Media Composer and have always edited comfortably on Avid. For long-form films, especially with so much footage, the media management tools and overall stability give me a lot of confidence and peace of mind. The seamless connection to Pro Tools for audio post work is an important tool.

Giebelhaus: Editing the section of the film on Beloved, Toni’s incredible fifth novel, was really daunting. It was difficult for a lot of reasons, but primarily because the premise of putting her epic work—which explores such huge, powerful themes such as slavery, survival, infanticide, interior pain, ancestors, and love—into this small little documentary film container with just a handful of scenes seemed kind of absurd and impossible. Doing justice to Toni’s work and the depth of her themes and characters caused me a lot of worry and sleepless nights.

The Beloved scenes had to work on two levels—they had not only to convey the scope of Toni’s literary masterpiece and explain the book’s plot, its impact, and structural achievement, but the scenes also had to make the viewer experience the visceral emotional power of her novel. I didn’t want the section to be pedantic, with the viewer just being told about what Toni’s writing makes readers feel—it had to be experienced too. The incredible singing voice of our film composer Kathryn Bostic, whose song “Bloodline Chant” launches the Beloved section, sets the emotional tone and is an anthem for Sethe and all the slave mothers we meet in the ensuing scenes. Woven with Kathryn’s music are powerful artworks by Charles White, Stephen Towns, Kara Walker and Joe Morse, which help tell Sethe’s story with halting power and beauty. Toni in her intimate direct-to-camera interviews leads us through her journey of writing Beloved, and then Toni actually reads a most haunting and important scene from the novel when Sethe kills her baby. For Toni’s reading, we only hear Toni’s voice and only see rare antebellum pictures of slave women and children in extreme close up with slow motion. By the end of Toni’s reading, we clearly understand what Beloved was really about and what it achieved as a novel, because we have felt a piece of it.

Giebelhaus: The film is woven with an incredibly rich archive of photographs, paintings, and old footage that capture centuries of African-American history. I culled the archives of The Library of Congress and the National Archives for much of this rarely seen material, so I wanted it to be incorporated into the film in the most impactful but also organic way. I worked closely with motion graphics designer Declan Zimmermann at Perpetual Motion Graphics to establish a visual treatment for the motion on the archival still photos. We wanted the motion to connect to the intimacy of Timothy’s filmmaking style, so thinking about eye contact and subtle continuous motion towards the eyes was really important. In the Beloved section, we had these incredible double imaged stereographs from the 1860s. Declan came up with a motion design that started with a wide shot in “stereo” and moved us into close-up viewing in a 3D type of effect. It’s really powerful. Motion Graphics also helped a lot in efficiently communicating the scope of Toni’s work—the number of novels she wrote and the number of books she edited. Declan designed motion graphics events when all of these books slide onto screen, making bold entrances and statements.

Giebelhaus: Before I started the film I was an admirer of Toni Morrison’s work. Now, I’m in awe of her and her work. It was an honor to work on the film and help tell her story. I learned so much about her life’s project and her amazing career in books as an editor and writer. She’s an incredible artist and Timothy and I wanted the film to be filled with art and music by African-Americans and have these powerful artful moments. At the outset the film was a biography of Toni Morrison, but what emerged was so much more; a film about not only Toni, but also about larger issues of history, culture, race, and humanity. My understanding now is that this larger journey and conversation is really the heart of Toni’s life project and is so necessary, so I’m so glad this broader conversation and experience come through in the film and I hope will help foster important conversations.