Sundance Notebook: Sexuality on Screen, Herzog in the Snow and America’s Shameful Past… and Present 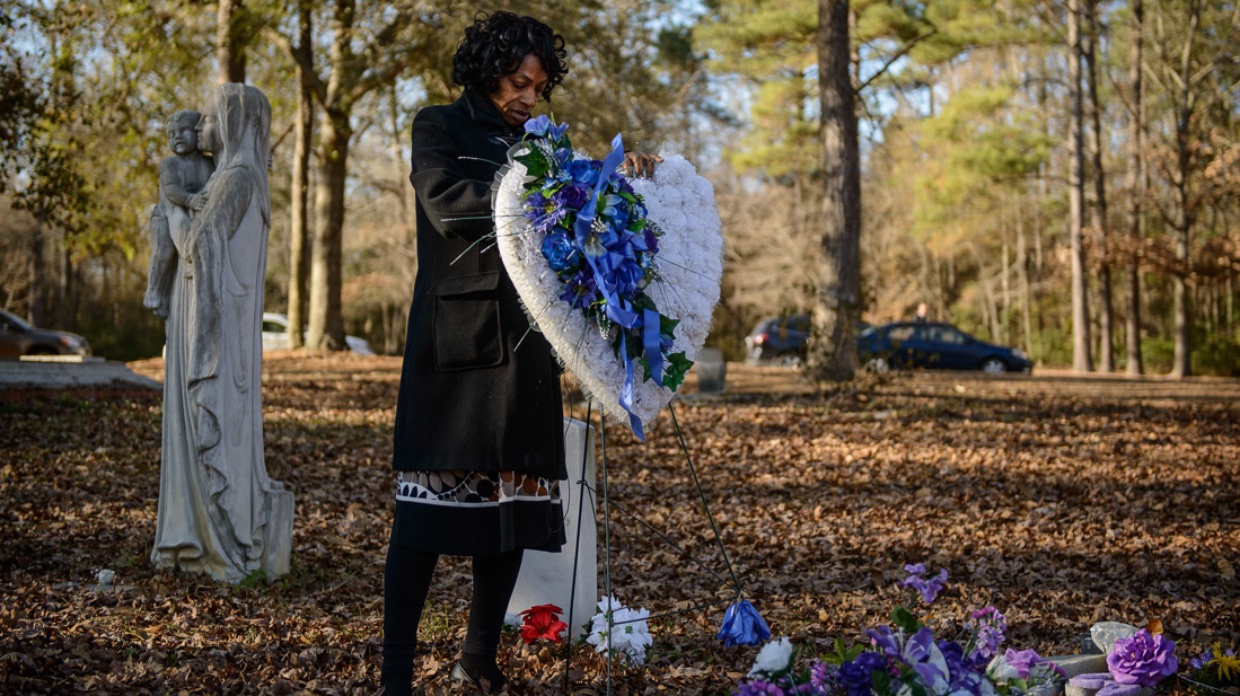 Lobbies and shuttles are the office water cooler of Sundance. 10:00 AM phone pitches for movies about baseball aren’t uncommon, and neither are frantic PR people. Yesterday someone on their phone was very much upset about the fireplace in their condo not working, while others I encountered were extremely concerned about how to get the Jewish community of Wichita to the movies. I also hear countless recommendations for how films should have ended, from critics and locals alike.

Fuck You
Short, Shorts Program 3
Anette Sidor / 2018, 15mins. / Sweden
Young actors sharply take on the power dynamics of pleasure in this intrepid Swedish short. When teen Alice shoplifts a strap-on from a sex shop, she explores her new accessory by challenging her friends, who respond to the purple-harnessed phallus with intrigue, confusion and repulsion. As Alice tries to comprehend the new sensation, a kind of real exchange I’ve never seen on-screen begins to happen, one that made me remember just how much sexuality remains to be seen in mainstream media.

Werner Herzog’s natural habitat is not a hotel lobby. This is the second time I have seen him at a film festival in a hotel lobby, and each time he looks like he is on a trek through a wilderness unknown. Maybe I’m projecting a bit, but still. It is unseasonably warm here in the mountains of Park City (as confirmed by the airport shuttle driver and the removal of my sweater), and slowly things lost in snow banks are thawing free. Swag of all kinds, lone gloves, various unsolicited business cards — it’s like an archeological dig adding to the standard film fest refuse of empty bottled water, ticket stubs and coffee cups. It is also full of brown puddles of unknown depth. Yesterday, I stood in line for 10 minutes on the off chance the party I had RSVPed to might have free pizza. The party was out of pizza. But they did have wellness IVs in the basement along with chair massages. I love Sundance’s interpretation of self-care.

Hot Dog
Short, Plays w/Premature
Alma Buddecke and Marleen Valin / 2019, 8mins. / Germany
The matter-of-fact tone in which protagonist Hannah talks about her vagina while symbols of dicks and bodily fluid ooze on screen in this short offers a welcome blunt comedy. The tone is fresh yet also familiar. Voiceover memories are surrounded by a kind of asymmetrical “Wes Anderson meets Slums of Beverly Hills” kitsch, with ’60s/’70s style and washy diner lighting filling the frame. The candid, funny approach to the female body and other aspects of young sexuality is refreshing in a world that is constantly politicizing it.

A panel entitled “Abilities Unlimited: The Real “D” in Diversity” focused on how the film industry should be more inclusive to the disabled community — from both a representation standpoint as well as a financial aspect, as a large swath of potential audience remains ignored. The panel also made me wonder how anyone in a wheelchair can navigate these semi-plowed sidewalks. Upon further research, it appears that Sundance does work hard to make the festival accessible to all communities (more info here). Actor Lolo Spencer (breakout star of this year’s Give Me Liberty) was on the panel and emphasized the need for creating content that speaks to one’s individual experience (if there isn’t a part for you in a film, write that film!). He reminded me of how Sundance and independent film has always been fueled by this concept, and that is a reminder much needed when faced with the palpable tension between social justice and decadence that sometimes paralyzes me at film festivals.

Luce
US Drama
Julius Onah / 2019, 109mins / USA
Adopted from war-torn Eritrea at age seven by American parents (a nicely cast Tim Roth and Naomi Watts), Luce (Kelvin Harrison Jr.) is now a teenager, a star student poised for greatness and supported by all around him. After Luce writes a provocative essay for a class, his teacher Harriet Wilson (a superb Octavia Spencer, whose depiction of gaslighting rings stunningly true) begins to question his perfection. The reactions to Wilson’s suspicions result in everything but clarity. Based on a play by J C Lee, the writing is deliberate and, at times, theatrical in its delivery. The movie’s monologues remain prisms of interpretation; their lack of definitive answers leaves an audience to wrestle with their own conclusions, ones inevitably steeped in individual fears, experiences and unconscious bias.

The Infiltrators
NEXT
Alex Rivera and Cristina Ibarra / 2019, 95mins. / USA
This hybrid documentary follows a group of Dreamers organized as The National Immigrant Youth Alliance. Living in Broward County Florida, home to a detention/deportation center for undocumented immigrants, they surrender to the cause, purposefully getting detained in order to aid in the release of those on the inside. The film jumps between moving interviews, personal cell phone footage, and re-enactments of events unable to be seen, spanning two very different presidencies. Though it doesn’t cohere perfectly, there is something in the crudeness of the film’s craft that feels genuine, with both the heart and spirit of the activists at the film’s core shining through. The Infiltrators tells a vital, under-publicized story at a historical moment when it’s especially resonant. I highly recommend this film.

Always In Season
US Docs
Jacqueline Olive / 2018, 89 mins. / USA
Each time an archival photo of an American lynching flickered across the screen I had a hard time looking at it. The visual representation of lynching, in its powerful grotesqueness, is kept from many mainstream histories out of shame, fear and disgust, to say the least. This film deftly accesses the topic through the recent story of a suspicious death of a young man in North Carolina and a historical reenactment group that annually performs a gruesome local lynching, the two stories woven together by a third mode of archival imagery and personal accounts. The film’s music also acts to fuse the movements. The entire experience is haunting, difficult and necessary, a depiction of an America that we think of as relegated to the past but that continues to encroach on the present.