“I’m Often Filming in Dusty, Dirty or Wet Places, and Changing Lenses Would be Difficult and Risky”: Director/DP Kim Longinotto on Shooting the Mafia 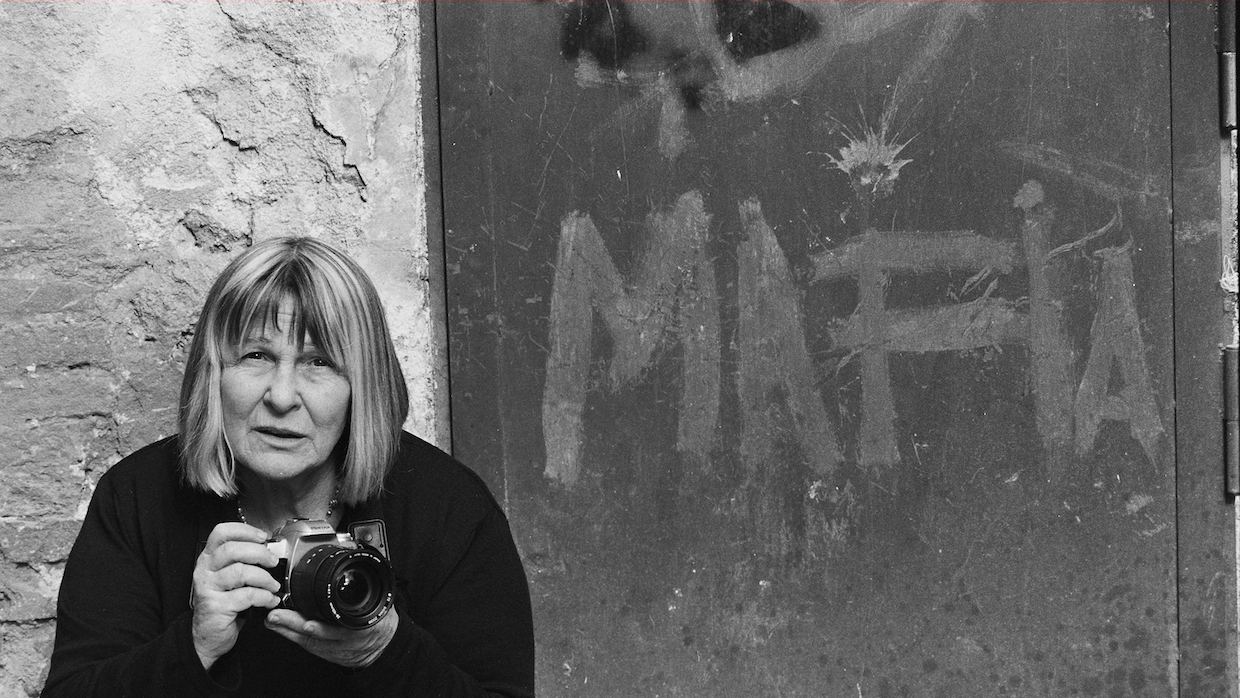 by Filmmaker Staff
in Cinematographers, Directors, Interviews, Sundance
on Jan 31, 2019

One of the UK’s most acclaimed documentarians, Kim Longinotto has been working steadily since 1976, serving as her own DP the whole time. Unusually for Longinotto, who favors a direct cinema, observational approach, her latest is an archival-based film, examining the life and work of Italian photographer Letizia Battaglia, famed for her work documenting (at great risk) the Sicilian mafia. Via email, Longinotto discussed why she only uses one lens, what her all-time favorite lens is and the challenges of making an archival documentary look like an observational doc.

Longinotto: I’ve been on camera in all of my films. I try to create a safe, quiet atmosphere for the people we’re filming. We work without talking among ourselves so that the contributor feels in control of the situation. The sound recordist and I have developed a choreography between us where we are super-aware of each other. We’ll move smoothly round each other and also adjust to suit each other’s needs. For example, if we’re filming in a noisy place, I’ll automatically go for a close shot so that the boom mike can come in very close. In a quiet situation, I’ll assume that I have more latitude and can enjoy having a wider shot. If we’re walking and filming together on a rocky terrain, I’ll rely on her to ensure that I don’t trip over something or fall down a hole. She will sometimes notice things on my blind side and may touch my arm to indicate I can pan right.

Most of the films I’ve made wouldn’t have been possible without me doing my own camera. In Dreamcatcher, Brenda and I would often talk in her car as she was drove to work. Nina, the sound recordist would sit in the back and I’d be in the front seat. It felt like a safe space we’d created for ourselves. Many of the scenes in Dreamcatcher were filmed in small spaces: I’d sit on the side of Brenda’s bed, film her in the mirror in her tiny bathroom, or sit in her cluttered office space.

It’s important for me to do the camera, not only because it means I can work in a quiet crew of two, but also because it means that the audience will have a more direct contact with the people we’re filming. People will often think aloud when I’m in the room with them or they’ll suddenly reveal what they’re thinking or feeling straight to camera. It means I can make the camera into an extension of me—nothing intimating, just something that I carry wherever I go.

Doing my own filming means I can film a scene exactly as I want it. I don’t make a fuss about filming and can adjust to the situation without having to move things around, or alter the lighting. I try to avoid zooming or changing where I’m standing or sitting. If there’s an intimate scene happening in front of me, I can protect it by being very still and calm.

Longinotto: Shooting the Mafia is only the second archive film that Ollie Huddleston and I have made; we usually work on observational films. We wanted it to be like an observational film, with a sustained narrative and clear characters. We were also very keen to find archive film that looked beautiful and added to the film’s atmosphere, rather than make a purely news-dominated film. Cristina Rajola mined LUCE’s archives to find us Italian documentaries that had been well filmed and originated on film. Clare Stronge found us archive from American and UK crews who had filmed in Italy. We were also guided by Louie Bayman, who recommended many classic Italian movies like Anna. The challenge of the film was to weave all of these different strands together with our protagonist’s own home movies, on-the-spot Italian TV reportage and the filming that we’d done ourselves.

Longinotto: The main influences are the demands of the film. I’m always trying to tell the story as visually and honestly as possible.

Longinotto: The biggest challenge is always getting the best possible image with the least possible disruption to the scene in front of me.

Filmmaker: What camera did you film on? Why did you choose the camera that you did? What lenses did you use?

Longinotto: I use the SONY PDW-850 with a wide-angle zoom lens. I love this camera because it’s very reliable and sturdy, and balances well on my shoulder. I rely on the camera being robust, as I will usually spend three months in a remote area where I wouldn’t be able to get a replacement. I carry the camera with me all the time and only put it down if we’ve finished filming and it’s absolutely safe. I use a single wide-angle lens as I’m filming in tight spaces, or in volatile situations where I need to be very flexible. The zoom lens also means I can film to edit without physically moving. My absolute favourite lens is my Canon 9.5 to 57, which I would have dearly liked to convert to the video camera. I bought it directly from its maker, Sadaaki Suzuki, at his workshop in Tokyo. He puts so much care and artistry into making his lenses, it was a delight to meet him. I like being able to look through the lens, I never use a screen.  I don’t want to have to carry different lenses round with me, so one lens has to do the job. Also, I’m often filming in dusty, dirty or wet places, and changing lenses would be difficult and risky.

Longinotto: The best possible lighting with the least possible disruption.

Longinotto: The whole film was a huge challenge. It was by far the hardest film to edit.