From All Angles: The Groundbreaking Volumetric Filmmaking of Scatter 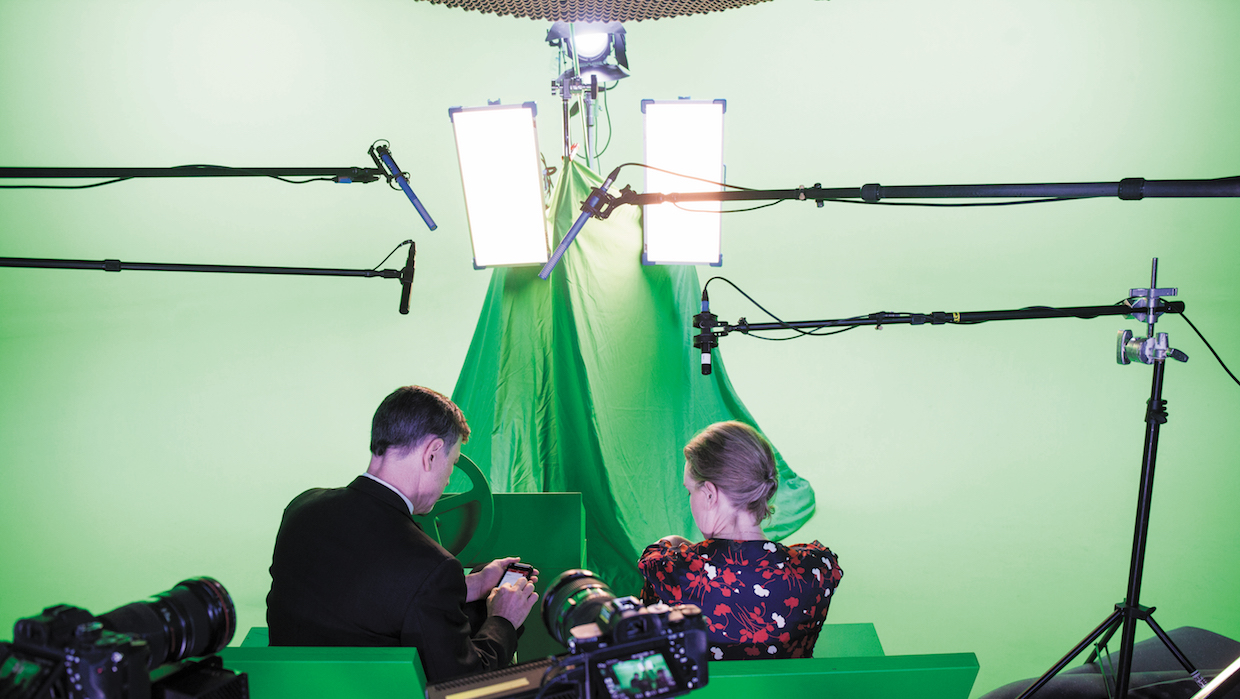 On the set of Queerskins

by Meredith Alloway
in Filmmaking, Issues, Transmedia
on Jun 19, 2019

“If you look at any discipline through the lens of emerging technology, you’ll find a group of people who are exploring what’s next for that discipline,” said James George, cofounder/CEO of Scatter, sitting across from me in its Bushwick studios. “For us, it’s filmmaking.” George and his eventual Scatter cofounder and CPO, Alexander Porter, whose background is in photography and documentary film, began collaborating—hacking and modifying cameras—back in 2010. “I reached this place of feeling constrained with those [conventional filmmaking] tools,” Porter told me. The third cofounder and CMO, Yasmin Elayat, a trained computer scientist and artist, joined the team in 2016, and they formed Scatter. While many companies are hopping on the virtual and augmented reality train of late, Scatter is one looking to advance the art of filmmaking. With its volumetric filmmaking tool, Depthkit, the partners are now placing this advanced technology into the hands of other creators.

George described volumetric filmmaking as “the love child of filmmaking and video games.” It has the same experiential aspects of a game, he said, but with “real people and places.” In other words, a video game uses computer-generated imagery, while volumetric filmmaking uses imagery photographed from the real world, imagery that is then rendered into a 3D space in which the viewer can freely move.

During my visit to Scatter’s office, the team walked me through how Depthkit, its volumetric downloadable software, actually works. Standing in the middle of their green screen setup, they live-recorded my movements and then dropped the footage into Depthkit. They removed the background in the space, refined the edges of my virtual image and exported it as an mp4 file. From there, I could edit the footage, add audio, color correct it and drop it into a pre-built landscape through software like Unity. Soon, I’ll be able to easily share the finished project—the company is building tools, including a recent collaboration with Vimeo, designed to enable anyone to access\the project interactively on the web.

The Depthkit workflow is familiar to anyone who knows film postproduction and friendly to those who aren’t the most tech savvy (admittedly, me). “It’s our incentive to educate people and to create the tools and share the tools,” Porter said. Added George, “Setting up the infrastructure is millions of dollars for the studio, and therefore, they have to charge thousands of dollars a minute to process the footage.” But because Scatter is distributing software, the price point is much lower. “Accessibility is baked into it for that reason.”

The software, currently in beta, is sold on a subscription basis. There’s a free tier that doesn’t allow footage export and then monthly $9.99 and $39.99 tiers. A Studio tier for larger teams and pro users will be announced in the future. And, of course, Depthkit is simply software; specialized hardware, such as Kinect, Structure Core or Intel RealSense, is required to shoot the footage.

For Scatter’s George, VR is the medium of the moment. He asked, “How do you tell the story of today?” Acknowledging social media, the 2016 election and information warfare we’re not even aware of, he says, “We are immersed in some kind of virtual reality even if we don’t have a headset on.”

Scatter began collaborating with filmmakers and other artists when Porter and George worked with filmmaker Alex Gibney on Zero Days, his 2016 documentary about cyber warfare. They pitched Gibney the concept of retelling his story in virtual reality as a volumetric film. Using Depthkit, Zero Days VR, directed by Elayat, showcased the digitally obscured testimony of an NSA whistleblower. It premiered at Sundance in 2017 and also won the team an Emmy for Outstanding New Approaches: Documentary. Scatter followed Zero Days VR with Blackout, an ongoing, participatory, nonfiction experience that takes place in a New York City subway, which premiered at the Tribeca Film Festival. Most recently, Scatter collaborated with a team that included VR pioneer Nonny de la Peña on REACH, an interactive installation that premiered in the 2019 Sundance Film Festival New Frontier section.

At the Scatter offices, I was able to try out Blackout. I put on a Vive headset while Porter explained, “The interactive mechanic is your gaze and your body location and hands.” As I walked through the experience, I saw people standing in a subway car. When I moved close to people, they responded by telling me their story. “It’s like Sleep No More [Punchdrunk’s immersive, site-specific telling of Shakespeare’s Macbeth] meets Humans of New York meets Choose Your Own Adventure,” I thought, where you can stay with one character the entire time or bounce to different ones. Elayat described Blackout as “real New Yorkers talking about what it means to be American in Trump’s America.”

After visiting Scatter and experiencing its work, I still wondered whether I, a filmmaker without a background in technology or VR, could handle Depthkit on my own. Then, I was invited to join one of the first Depthkit workshops. The attendees ranged from a creative technologist to a community college teacher to an installation artist. The class covered lighting best practices, the Z parameters, sensors that shoot depth (like Kinect for Windows V2 or RealSense depth cameras) and what to have subjects wear. As we each stepped into the green screen, shooting footage for our test projects, we experimented with movement, just to see how the technology would capture our likenesses. Cory Allen, one of the instructors, has been involved in Depthkit’s beta program, and he’s available for hire. For example, he came onto Illya Szilak’s Queerskins, a beautiful narrative VR film shot with Depthkit, to consult and shoot.

With each production, Scatter continues to refine its technology. In a culture that moves swiftly and wants instant results, the VR/AR landscape can seemingly move at a glacial pace. But Porter is patient. He said, “We do think that this is a long project. As a form, as a medium, as a genre, it is totally in its infancy right now.” As for the community, sharing information and discoveries only helps to move the discipline forward. “It’s a community that is trying to push the boundaries more than anything,” Elayat added. Independent film, similarly, has always been at the forefront of challenging barriers, creating space for new voices. With Scatter’s mission to bring technology tools into the hands of filmmakers, the two worlds coalesce. When asked about the future of volumetric and immersive filmmaking, Porter admitted that it’s still unclear, and that’s exactly what makes it thrilling. “We’re still finding the medium. In doing so, it will come into its own maturity. It’ll transcend comparisons to past media.”