“A Record for All of History of What Our Lives Were Like, and What We Went Through”: Waad Al-Kateab and Edward Watts on For Sama 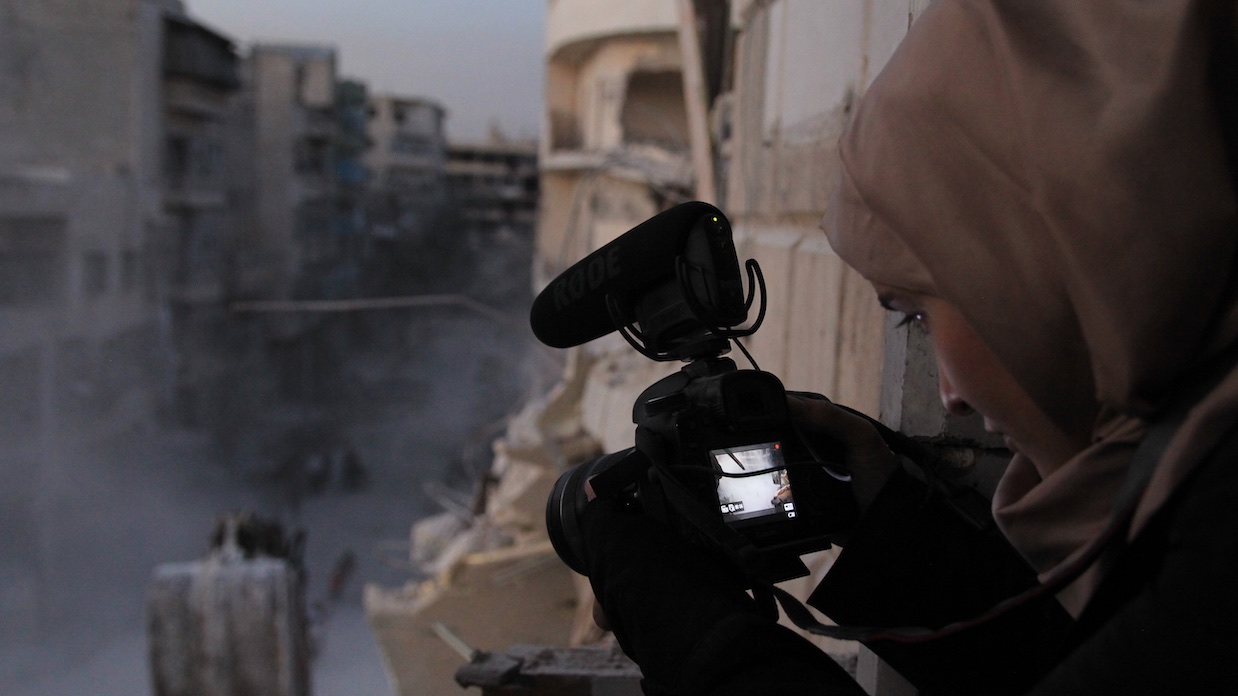 by Lauren Wissot
in Directors, Interviews
on Jul 25, 2019

Nabbing this year’s top doc prize at Cannes (as well as at SXSW), For Sama is a harrowing, on-the-ground look at the disintegration of a society through one young woman’s eyes. That woman, Waad Al-Kateab, also happens to be the film’s co-director (along with Emmy Award-winning, BAFTA-nominated filmmaker Edward Watts). Incredibly, and courageously, as her beloved city of Aleppo came under attack by Syrian forces, Al-Kateab decided to pick up a camera and create a heartfelt record — or rather “love letter” — to her unborn daughter Sama. What she captured was not just the clear-eyed reality of losing friends (both to bombs and emigration) on a regular basis, but also her own personal secrets to survival: love, marriage, and of course, motherhood.

Prior to the doc’s theatrical premiere (July 26th in NY and LA), Filmmaker spoke with Al-Kateab and Watts about the surprising journey their film took from war zone to the south of France.

Filmmaker: So how did you two meet and decide to work together?

Watts: We were match-made by our colleagues at Channel 4, ITN and Channel 4 News. Waad had been producing short news reports for C4N during the siege of Aleppo, but no one had any idea that she had gathered such a huge archive of personal footage until after she was forced to flee Aleppo. She wanted to work with someone to help turn all this footage into a film.

Channel 4 thought of me because they knew I was passionately engaged in the story of the Syrian revolution. Also, with over 12 years of doc-making experience, they thought I had the right skills to help her do justice to the story of her life and the people of Aleppo. They introduced us to each other in London two years ago — and we started work on the film almost immediately.

Filmmaker: Waad, you weren’t a filmmaker until the uprising in Aleppo began. But had you been interested in becoming a documentarian before this — or was the camera simply a means to capture history for your daughter (and your fellow Syrians)? Was filming also a way to perhaps gain control over the chaos, avoid feeling helpless?

Al-Kateab: At the start, the regime was denying protests were happening at all. So filming what was happening was so important — saying that “yes, we’re here, the revolution is happening” — to counter their propaganda. As time went on, I was very focused on recording everything, all the details of how we were fighting for our freedom. Not just the big dramatic protests, but also our friends hanging out, how we painted signs for the demonstration and made our plans.

The value of these recordings was really shown to me when some of our close friends were killed — one guy named Omar, and another pair of brothers Ghaith and Mahmoud. They were killed by the regime. After that, I realized that my footage was one way in which we had a record of our great life together, a source of our memories. So I became determined to document all details of our lives as a record for all of history of what our lives were like, and what we went through.

Filmmaker: How much footage were you two dealing with? How did you decide what to leave on the cutting room floor?

Watts: We never totaled it up exactly but at least over 500 hours. When you think that Waad was filming pretty much every day of her life through five years, sometimes for just a couple of minutes, sometime for a couple of hours, you get an idea of the scale of her archive.

It’s impossible to give a general answer about how we decided what to cut. The process was a long intensive journey, sifting down through the footage to find the critical pieces — a moment of humor, of horror, of intimacy, of despair. Once we had gathered those, we began to build the film up, like a mosaic, trying to work out what resonated, reflected or contrasted with what so that we were able to capture the essence of the story.

We often had robust debates about what was important and what wasn’t. Waad had her eye on a Syrian audience, while I was focused on making the film as engaging and emotional as possible for a Western audience. Through our honest debates and shared determination to make the best film possible, we eventually found the right mix of elements that you see in the film today.

Filmmaker: Can you take me through the actual production process? Was footage being sent out of Syria before Waad left?

Watts: Waad was uploading and sending out some footage before she left, but that was all for the news. For Sama only began once she was out with all her material. The first stage was to map out everything she had gotten, and for her to go through all the details and background of all of the footage. Then to identify some of the key pieces of the puzzle and the building blocks of the story. Then to start weaving them together. After that, it was an incredibly complex, detailed process trying to find the right way to frame the story and tell it.

Filmmaker: Were you aware of the anti-immigrant backlash to the Syrian refugee crisis as you were piecing together the film? Did “winning hearts and minds” play into the editing process?

Watts: Of course we were aware of the backlash to the Syrian refugee crisis. But this did not inform our creative process. We were just determined to tell the truth of Waad and Hamza’s life in Aleppo, with all its dilemmas, difficulties and joys, rather than construct an ‘argument’ relevant to that debate.

It so happens that the result of that process is, hopefully, a film that helps people to empathize with the terrible choices refugees face when forced to flee from their homes — the desire to keep their children safe while also fight for their children’s future. And through this piece, people can see that Syrians are people just like them, with the same dreams, fears and ideals. We’re glad that the film offers a powerful rejoinder to the sensationalist negative portrayals of refugees sometimes seen in the media.

Filmmaker: How did you come to play Cannes? Winning must have been quite a surreal experience.

Watts: We were lucky! We had no special connections to the festival and just applied through the normal application process, without any real expectation that we would be accepted. Then a few weeks later, out of the blue, we had a message saying that they were interested in screening the film. It was an incredible moment. Then to win was beyond our wildest dreams.

But it is a strange thing to win awards for a film that contains so much suffering, and that emerged from such a tragedy as the fall of Aleppo. So though we were incredibly happy, our first thoughts were always with what Waad, Hamza and the people of Aleppo had lost. Also with the situation in Idlib, where so many people are still suffering at the hands of the regime three years after Waad and Hamza experienced exactly the same thing in Aleppo.