“There Is No Video Village”: DP Robert Richardson on Shooting Once Upon a Time…in Hollywood in 35mm 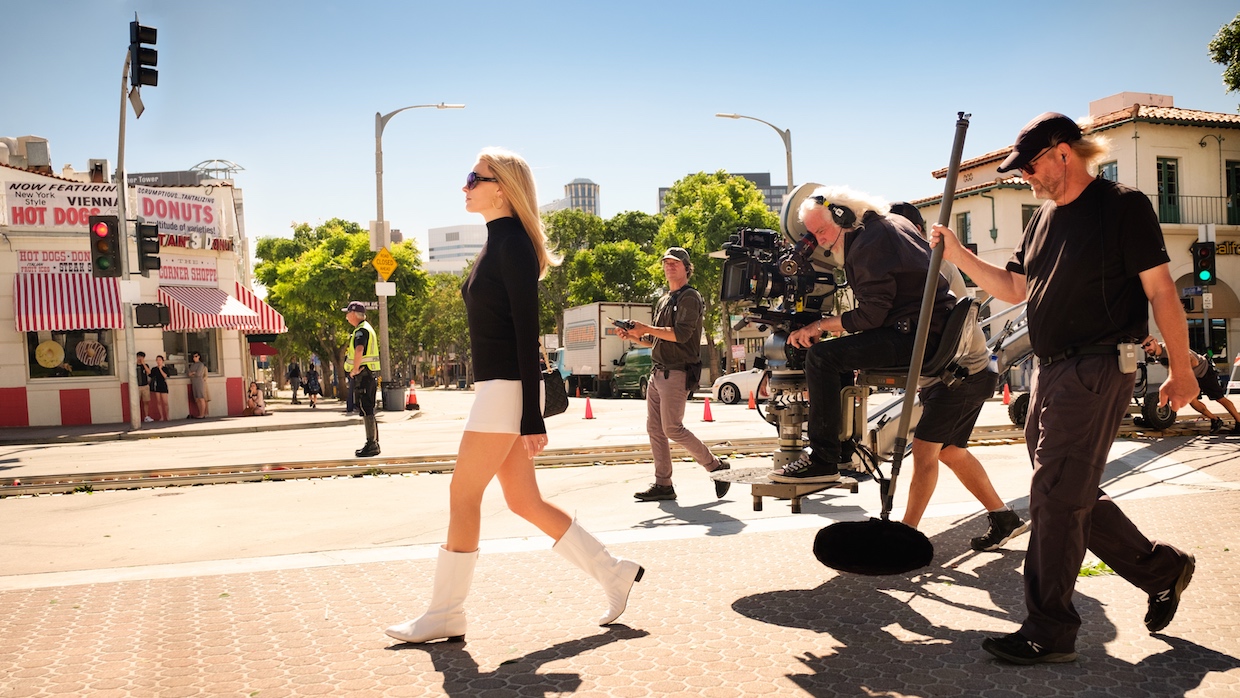 Margot Robbie and Robert Richardson on the set of Once Upon a Time...in Hollywood

by Matt Mulcahey
in Cinematographers, Columns, Interviews
on Aug 1, 2019

35mm, Once Upon a Time… in Hollywood, Quentin Tarantino, Robert Richardson

During lunch break on a Western TV series, fading star Rick Dalton (Leonardo DiCaprio) settles into a director’s chair next to his nine-year-old co-star. The young actress is armed with a Walt Disney biography, Dalton a pulpy Western novel. The girl asks Dalton about the story in his book and he recounts the tale of an over-the-hill bronco buster that eerily mirrors his own circumstances.

Once Upon a Time…in Hollywood is a loving valentine to an era of studio filmmaking that was coming to an end in 1969, but it’s also a rumination on the inevitability of aging and mortality from a 56-year-old director, Quentin Tarantino, who has long sworn his next film will be his last.

I don’t want to spoil Hollywood’s conclusion, but it certainly doesn’t feel like the final testament of a filmmaker ready to hand off the medium to a new generation. Once Upon a Time…in Hollywood is not an elegiac walk off into the sunset, but rather a violent (it’s Tarantino, what else do you expect) rage against the dying of the light.

Whatever Tarantino’s film career holds in the future, it will likely be intertwined with his longtime cinematographer Robert Richardson. The three-time Oscar winner has shot every Tarantino movie since 2003 with the exception of Death Proof, which Tarantino shot himself.

With Once Upon a Time…in Hollywood now in theaters, Richardson spoke to Filmmaker about actors operating flamethrowers, basking in the failures of old lenses, and how he became a devoted cinephile despite the best efforts of his New Hampshire boarding school.

Filmmaker: Once Upon a Time…in Hollywood is set in 1969. You would’ve been 13 or 14 at that time. What movies from that era had a profound effect on you?

Richardson: You’d have to go a little bit back before that too, back to 8 ½, Lawrence of Arabia, Dr. Strangelove, Yojimbo, Breathless, Battle of Algiers and Jules and Jim. But [in terms of films released around 1969], it was Midnight Cowboy, Butch Cassidy and the Sundance Kid, The Wild Bunch, 2001: A Space Odyssey, The Graduate and Bonnie and Clyde.

Filmmaker: Where were you in your life?

Richardson: I was stuck in a private school in New Hampshire. They took me to see 2001 (1968) and The Godfather (1972), but all of the films that fell in between I had to do without. I had to catch up with many of the movies I mentioned above when I was on holiday or summer vacation.

Filmmaker: Salvador, your first feature as a cinematographer, recently popped up on Amazon Prime. I’ve been meaning to revisit it. The last time I saw it was on VHS.

Richardson: The last time you saw it was on VHS! Nobody even knows what that is anymore. You’re going to have to explain it to your audience. [Note: In case Bob is right, VHS was a magnetic tape format popular for home viewing from the early 1980s to the mid-2000s.]

Filmmaker: You had previously shot a documentary for the PBS series Frontline about the conflict in El Salvador, but this was your first feature and you were working with Oliver Stone. Did you feel like you were in over your head?

Richardson: When you go out on a first date with somebody you’ve just met, what’s your fear factor?

Filmmaker: I haven’t been single in about 15 years. So I can’t even tell you.

Richardson: Well, I’m way past that [amount of time] thinking back about Salvador. (laughs) Obviously I was extraordinarily frightened to take on a feature with Oliver. He’d won an Oscar for writing Midnight Express. He’d already written Scarface. Making a movie for the first time is about the same level [of frightening] as making love for the first time.

Filmmaker: You’re known for your collaborations with Stone, Tarantino and Martin Scorsese, but you also shot two films for John Sayles, including one of my personal favorites, Eight Men Out.

Richardson: Working with John Sayles on that particular film was a tremendous joy. He’s extraordinarily brilliant and extraordinarily specific. He not only writes and directs his films, but he’s also an editor. He locked down every shot he needed based on where he knew the edit would go. He had shots planned down to the second. That’s rare.

Richardson: First of all, it’s my eye on the camera [because I operate]. I’m looking directly at the actors. When I work with Quentin, he’s also beside the camera. He’s not in video village. There is no video village. It’s literally the camera shooting the shot. If I do a dolly shot, Quentin rides on the dolly directly beside me. Oliver was very much that way too—beside camera, looking at the actors. In Quentin’s films, there’s almost no playback at all. When you see it [play out live in front of the camera], that’s the end of it. Either you captured it or you didn’t, and that’s based on Quentin’s perspective.

Filmmaker: Not only did you shoot on film, but you projected your dailies on film as well.

Richardson: Yes, we printed every select in 35mm. That’s the way Quentin reviews the dailies—35mm projected on a screen. So, if you fail in shooting, you fail in your dailies. There’s no correcting. There was a digital aspect in that we did a digital intermediate, which we didn’t do on The Hateful Eight. However, that digital intermediate was all about replicating the work accomplished in our 35mm dailies.

Filmmaker: You had several different series of Panavision anamorphic and spherical lenses as well as some vintage zooms. How did you select your lens package?

Richardson: Part of it was just experience with those lenses, many of which I’ve used since early in my career. The newer lenses are sharper and have less flares. They don’t capture skin tones the same way. So what you’re seeing now in cinematography is a drive back toward the failures of earlier lenses—or what would’ve been considered failures. Now we see [those imperfections] as enhancements, because they bring a quality that’s opposed to the absolute consistency of the digital image.

Filmmaker: What was your inspiration for recreating the aesthetic of late-1950s Westerns for Rick Dalton’s fictional series Bounty Law?

Filmmaker: Right. There’s a scene where DiCaprio imagines himself in the McQueen role from that film and you superimpose him into the movie. How did you do that? Is it just DiCaprio against greenscreen and then you’ve got a monitor with frames from The Great Escape for reference?

Richardson: Exactly how you just said. In that particular case we did have a playback system, which is not something that exists in Quentin’s films otherwise. We found what we thought was a perfect lens size, then we would move [the camera] up and down, in and out, to try to match the size of Leo to Steve McQueen. Quentin would sit beside the camera and work with Leo in terms of creating a performance that was extremely similar to what McQueen had done in The Great Escape.

Filmmaker: How about shooting scenes from The 14 Fists of McCluskey, which is a World War II action movie starring Dalton?

Richardson: That was definitely fun to shoot, but also emotionally very complex, particularly for Leo because [his character fires a flamethrower at a room full of Nazis]. Can you imagine, as an actor, shooting fire at other human beings? No one has asked me about that in interviews and I’m very surprised.

Filmmaker: I guess I assumed the flames were perhaps digitally enhanced.

Richardson: No, that’s real. He shot that flamethrower at those people.

Filmmaker: The movie reaches for a different tone in the scene where Brad Pitt’s stuntman character Cliff Booth visits the Spahn Ranch, where the Manson family has taken up residence. The mood almost becomes something akin to the original Texas Chain Saw Massacre as Pitt insists on checking on the ranch owner George Spahn (Bruce Dern).

Richardson: First of all, Dakota Fanning [who plays Manson acolyte Squeaky Fromme] is an amazing actress and I love the way she played that scene. We shifted into something a little closer to horror filmmaking in terms of lighting, with Brad’s dark silhouette moving down toward Bruce Dern’s room. I love that sequence. Quentin created something that is eerily beautiful. It’s an amazing compilation of styles as he melds slow motion and normal speed for the beating [of a Manson family member by Pitt’s character] at the end of that scene. I think it’s one of the strongest sequences in the film.

Filmmaker: My favorite scene is when Rick Dalton shares lunch with a young actress on the set of a TV Western show he’s guest starring on. He has an emotional breakdown telling her about the pulp Western novel he’s reading featuring an over-the-hill cowboy. That scene summed up much of what the film was about for me.

Richardson: Yeah, his career is falling apart just like your career will fall apart at some point, as will mine. We will all fall into that same place some day. So Leo is sitting there basically reading his own bio in front of a young girl and he has the most amazing line when he says “In 15 years…”

Filmmaker: “….it will happen to you too.”

Richardson: Yeah. That’s life. No matter what we do in our lives—whether it’s in film, in business, in sports, it doesn’t matter—at some point we will all know that moment. I think that’s what the movie is about—recognition that we will all eventually fall from the heights of whatever we think we are.

Filmmaker: There are about 50 theaters playing the movie in 35mm on opening weekend and another half dozen screening it in 70mm. When you did The Hateful Eight, there were a lot of stories about the monumental undertaking of getting the 70mm projectors up and running. Were there any similar difficulties for the 35mm release of Once Upon a Time In Hollywood?

Richardson: From [an equipment] perspective, no, there wasn’t that much work because there are so many theaters that still have 35mm projection equipment. But there are very few people who know how to properly project film. It’s an art that’s lost. Because of that, the projection is going to be hit or miss. We’ve lost that art, we’ve lost that skill. Just like we’re going to lose [the art of film development]. How many labs can actually take film in and develop it and print it? Very few. We’re going to lose that art and I’m sad about that. I love digital as well. Don’t look at me as a naysayer. I love both, but we need to keep film alive.