Inside Out Planets: NASA’s Influence on Cinema’s Visions of Outer Space 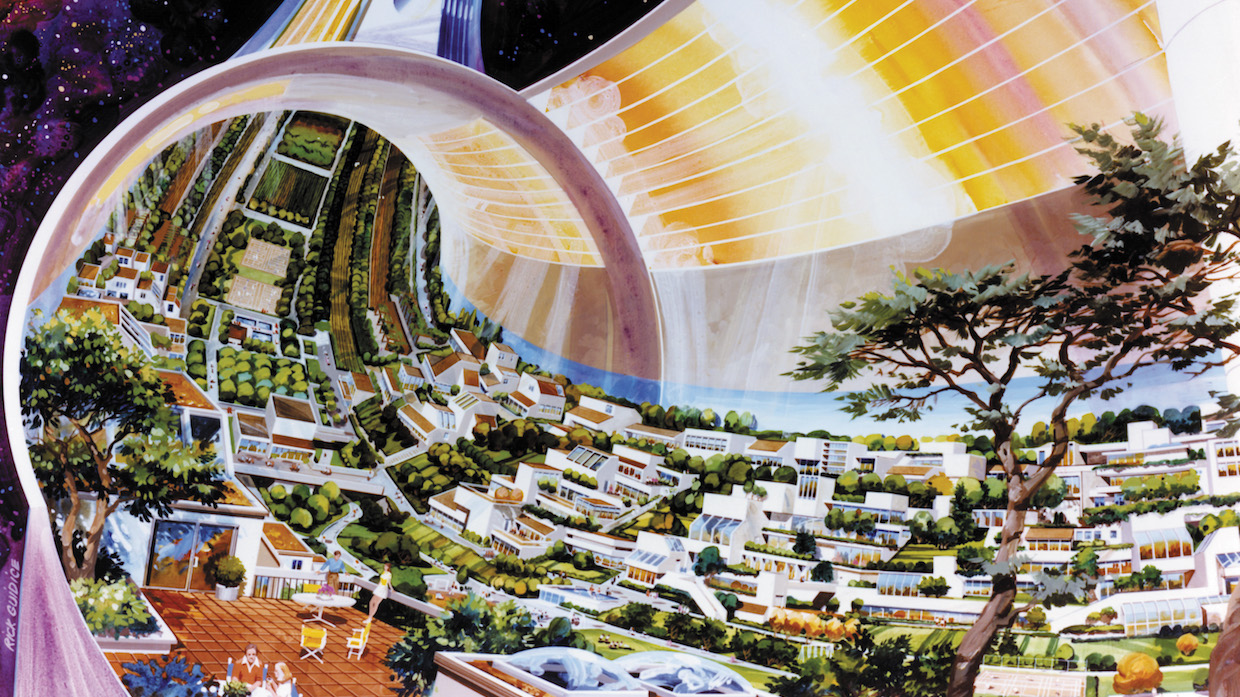 In 1975, an interdisciplinary group of engineers, artists, physicists, architects and urban planners convened for 10 weeks at Stanford University and the NASA Ames Research Center in Mountain View, California. The group assembled to design complete and convincing systems for sustained life in outer space. Fred Scharmen—author of Space Settlements, a new book that considers the cultural impact of the 1975 Summer Study’s proposals—notes the most “influential outcomes” were the trippy paintings made to illustrate these ideas. These paintings, in watercolor, acrylic and gouache, depict bright bubbles of life and majestic rings—appearing like cornucopias in cutaway view—with tranquil landscapes and cozy towns enclosed amid planets and fields of stars. Stewart Brand, a sometimes collaborator of the Summer Study’s organizer, Gerard O’Neill, called the concave landscapes “inside-out planets.” The structures would be unmoored in space, with no planet to call home because of the rotation of the forms at a fixed position in high orbit. You have probably seen the images, which have been widely distributed, frequently shared online or used to illustrate news stories about space exploration and even exhibited in museums. Films as recent as Interstellar (2014) and Elysium (2013) and architecture like Norman Foster’s Apple Park campus in Cupertino, which opened in 2017, indicate that, decades on, the Summer Study aesthetic continues to have a hold on those in the business of imagining the future.

The relationship between science fiction and technology is often that of a feedback loop. In a well-known example, Steven Spielberg assembled an “idea summit” before filming Minority Report. A group of experts working in science and technology, including Brand again, were asked to imagine what the United States might look like in 50 years. Some of the ideas that emerged from that gathering, including gestural control of interfaces, helped situate the film in a plausible future and consequently became cultural touchpoints, influencing innovation in real world product design. In contrast, the 1975 Summer Study was a committed attempt to address the perceived need to expand civilization off planet (overpopulation was among the concerns at the time). The conference’s lasting influence appears to be an aesthetic one, for how these visuals activated the science fiction imaginary. It remains to be seen whether the visual influence will ever spiral back into technological innovation.

The Summer Study paintings by Rick Guidice and Don Davis are NASA commissions and, therefore, part of the public domain. With no copyright restriction on their use, it is easy to see how these images became look-book and mood-board standbys. Widely covered in the media at the time of their release, the images received renewed attention after they were uploaded to the World Wide Web in the 1990s. Later, Scharmen writes, the images “repeatedly entered the cycles of interest that feed online visual culture on social media.” The visuals have been reblogged all over Tumblr, pinned to countless Pinterest boards and appear in numerous blog posts about futurism, retrofuturism or developments in space technology.

Gerard O’Neill, then a physics professor at Princeton University, decided to invite artists to the Summer Study despite the hesitation of other space habitat researchers, who believed that dazzling visuals would gloss over the fundamental problems of spatial and systems design. But, as Scharmen argues in his book, the images are “terms within larger systems: not only political, architecture, landscape, and urban systems but also cultural systems, including ideas about science fiction and utopian speculation about the future.” O’Neill even mentions science fiction in a piece he wrote for Physics Today. The idea that manufactured environments in space were better suited for humanity than environments built on the surface of any planet was a provocative one. It was a novel solution; a “mental ’hangup’—the fixed idea of planets as colony sites—appears to have trapped nearly everyone who has considered the problem,” wrote O’Neill, “including, curiously enough, almost all science-fiction writers.”

The Davis and Guidice paintings depict three kinds of potential environments. Each has an open ground plane rather than stacks or bunches of modules in dense, claustrophobic quarters. O’Neill’s original prompt for Guidice was to depict a bucolic French countryside within a cylinder. The first proposed space, the O’Neill Cylinder, designed to accommodate more than 800,000 people, appears like a giant, open, wraparound space. Several scenes in Christopher Nolan’s Interstellar depict what life would be like inside its artificial gravity, including the wild baseball games that result. The folding cities in Nolan’s 2010 film Inception offer similar spatial conditions. In one of the most lively sections of Space Settlements, Scharmen lists some of the advantages of an environment like this—wayfinding, for one, is simple when all corners of a city appear straight ahead or upwards. The Bernal sphere, which is much smaller, has a similar design in which the entire habitat is visible. A person inside this globe might see roofs of houses above their heads where on earth there would be sky. The third concept, called the “Stanford torus,” with its donut shape, has a more traditional landscape. It doesn’t have a sky exactly, but a system of mirrors at the inner ring overhead that distribute light. The design of the space station in Neill Blomkamp’s Elysium—exclusive to an elite and powerful class, while the impoverished and hungry remain on Earth—is based on this concept. Syd Mead, who painted a Stanford torus for the 1980 book National Geographic Picture Atlas of Our Universe, was involved in the Elysium concept design.

Guidice’s Summer Study paintings are currently on display at San Francisco MoMA through January 20, 2020, in an exhibition celebrating the 50th anniversary of the moon landing. A documentary series directed by Brett Ryan Bonowicz called Artist Depiction, which includes interviews with Guidice and Davis, is currently streaming on Amazon Prime.

Meanwhile, Amazon’s founder has fashioned himself as the one who might put the Summer Study visions into reality. Jeff Bezos mentioned O’Neill’s ideas for floating space settlements and displayed riffs on the Davis and Guidice images in a presentation he gave last May, unveiling a lunar lander and long-term goals for his aerospace company, Blue Origin. Maybe Tumblr and Pinterest are the tech companies better suited to continue the legacy of the 1975 Summer Study. Should it succeed, Blue Origin seems poised to establish bleak, Elysium-style socioeconomic divides throughout space.