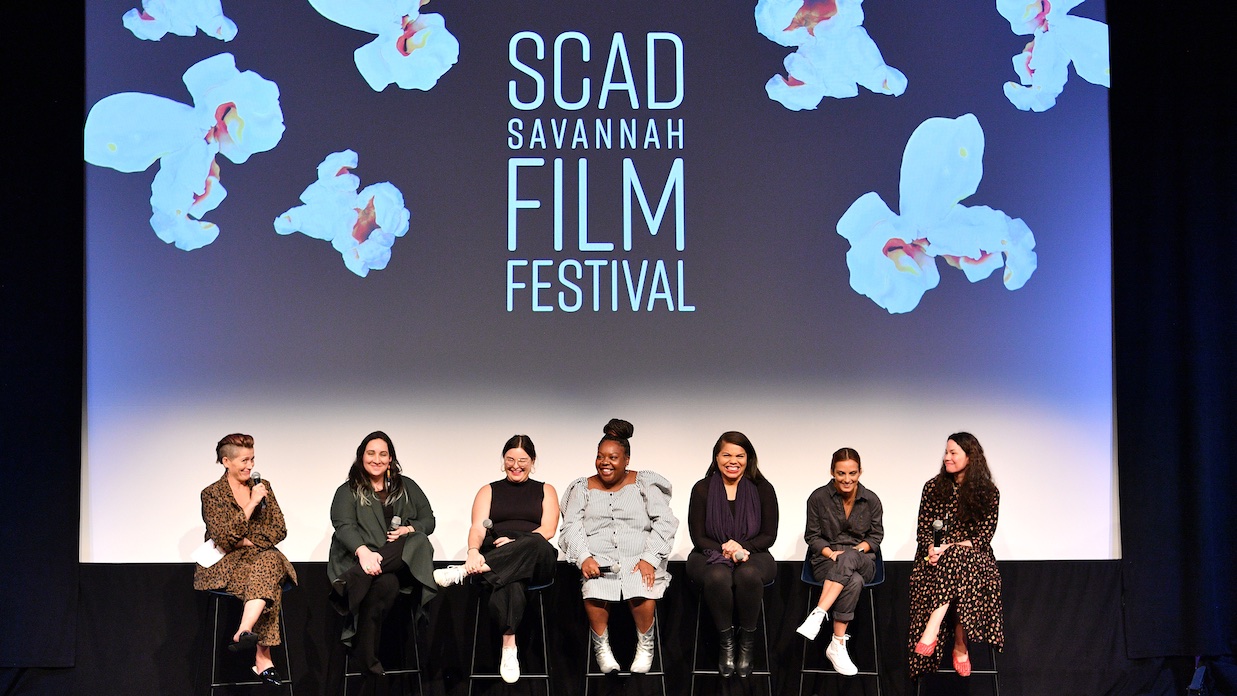 “Come for the glitz. Stay for the substance,” really should be the tagline on my SCAD Savannah Film Festival T-shirt, I thought to myself during this year’s 22nd edition of the US’s largest university-run film festival. Along with the twice Oscar-nominated Alan Silvestri, attending to receive a Lifetime Achievement Award for Composing, the fest invited a dozen high-profile and up-and-coming actors (Aldis Hodge, Daniel Kaluuya, Danielle Macdonald, Samantha Morton, Elisabeth Moss, Valerie Pachner, Olivia Wilde, Kaitlyn Dever, Beanie Feldstein, Jharrel Jerome, Mena Massoud, and Camila Morrone) to accept an array of accolades. (It also hosted decidedly not-famous journos like myself at the Savannah-charming Perry Lane Hotel.)

But scratch below the Hollywood-tinged surface and you’ll find an event equally concerned with giving its mostly young, genuinely hungry-for-knowledge attendees with a behind-the-scenes education in the business of bringing dreams to the screen. And the festival’s refreshing focus on female empowerment was something to be lauded as well. For in addition to screening over 50 women-helmed films this year, not to mention showcasing the third edition of the always informative Wonder Women Panel series, the SCAD Savannah Film Festival highlighted a program titled “Refinery29 + Level Forward Present Shatterbox.” For those not in the know, Shatterbox launched back in 2016 (birthed by Refinery29 and Level Forward) in order to provide female shorts-makers with the means to tell the wide-ranging stories they’re fighting to tell.

“We’d actually been sent the USC Annenberg research from Dr. Stacy Smith, which showed that for the last 10 years (from 2001-2016) there had been no change in the number of women and minority directors represented in the industry,” explained gatekeeper Shannon Gibson (Executive Producer, Scripted Program/Shatterbox Film program) via email after I caught up with her post-fest to ask why the entity had been set up in the first place. “In fact, in 2018 the number of female directors working on top-earning films actually declined from 11% to 7% from the year before. Combining this research with our own research that we’d done at Refinery29, we looked at what we as an organization could do that would make a difference in the industry.”

“We knew we couldn’t solve the problem because it’s a big problem,” Gibson continued, “but we knew there were things we could do with the resources we had. So we created a program that was born out of this need to move the film industry forward, and where we could create direct impact.”

“We launched Shatterbox in 2016, in part as a rallying cry to the industry, as well as a resource that would allow women to make short films that redefine identity, imagination, and storytelling through the female lens. Trying to level that playing field, and showcasing the creative power of women both in front of and behind the camera, is so important to us. We really want to shift the culture and show the industry that this can be done, while at the same time introducing our audience to these women so that they can continue to follow their work.”

Gibson added that, “We’ve now released over 20 short films to date since launch, with three currently being developed into features — including Good Time Girls by Courtney Hoffman, who is also slated to direct Steven Spielberg’s upcoming film Ruthless. We’ve been fortunate to nurture and support stunning directorial talents, from Kristen Stewart to Yara Shahidi, to Gillian Jacobs, to Jessica Sanders. And we’re proud to announce that season three is launching, with our amazing partners at Level Forward, with the seven shorts shown at the special screening at the SCAD Savannah Film Festival.”

As for why this specific fest, Gibson cited two important reasons. “The atmosphere is great for filmmakers, because the students and the Savannah community really turn out for the festival in ways that truly support these creators. The festival also provides a great opportunity for these filmmakers to meet each other, and to build on the community with one another, which they otherwise may not have had.”

“The intention was always for the program to have longevity, and part of the way we do that is by not only incubating great artists, but also great ideas,” she then emphasized. “We want the films that are successful to go on and live a long life. Ultimately, we’re interested in bridging the financial opportunity gap that so many women filmmakers face, so to continue to funnel these works into the industry is incredibly important.”

In closing Gibson told me, “At Refinery29 and with Level Forward, we look for a wide range of shorts across diverse genres. Women too often get pigeonholed to direct only one genre and we want to avoid that, so we’re trying to make sure we’re including films across the spectrum. We want to encourage and foster women creators who are eager for experimentation and creative freedom.”