Leading up to the Oscars on Feb. 24, we will be highlighting the nominated films that have appeared in the magazine or on the Website in the last year. Nick Dawson interviewed Michael Clayton writer-director Tony Gilroy for our Director Interviews section of the Website. Michael Clayton is nominated for Best Picture, Best Director (Tony Gilroy), Best Actor (George Clooney), Best Supporting Actor (Tom Wilkinson), Best Supporting Actress (Tilda Swinton), Best Original Screenplay (Gilroy) and Best Original Score (James Newton Howard). 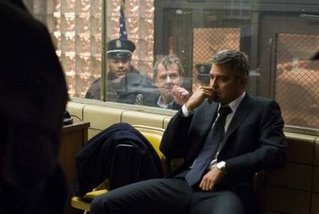 As a Hollywood screenwriter, Tony Gilroy has brought an insistent energy and intelligence to the projects he has worked on, so it was a totally logical step that he should progress to becoming a director. New York native Gilroy grew up with writing and the movies in his veins, as he is the son of Frank D. Gilroy, the Pulitzer prize-winning writer and filmmaker, possibly best known for writing The Only Game in Town (1970), starring Elizabeth Taylor and Warren Beatty. Gilroy Jr. debuted with the superior ice-skating romcom The Cutting Edge (1992) before embarking on a creative collaboration with director Taylor Hackford which produced Dolores Claiborne (1995), The Devil’s Advocate (1997) and Proof of Life (2000). Gilroy is most famous as the architect of the Bourne trilogy, the superlative spy thrillers starring Matt Damon, which are ostensibly based on novels by the late Robert Ludlum, but are in fact almost entirely Gilroy’s own creation.

Compared to the Bourne movies, Gilroy’s debut film as director is a distinct change of pace: Michael Clayton is that most rare of movies, a smart, thoughtful thriller that takes its time. click here to read full story