“Editing Is a Process of Trial and Error and Personal Instincts”: Editor Jeff Gilbert on Boys State 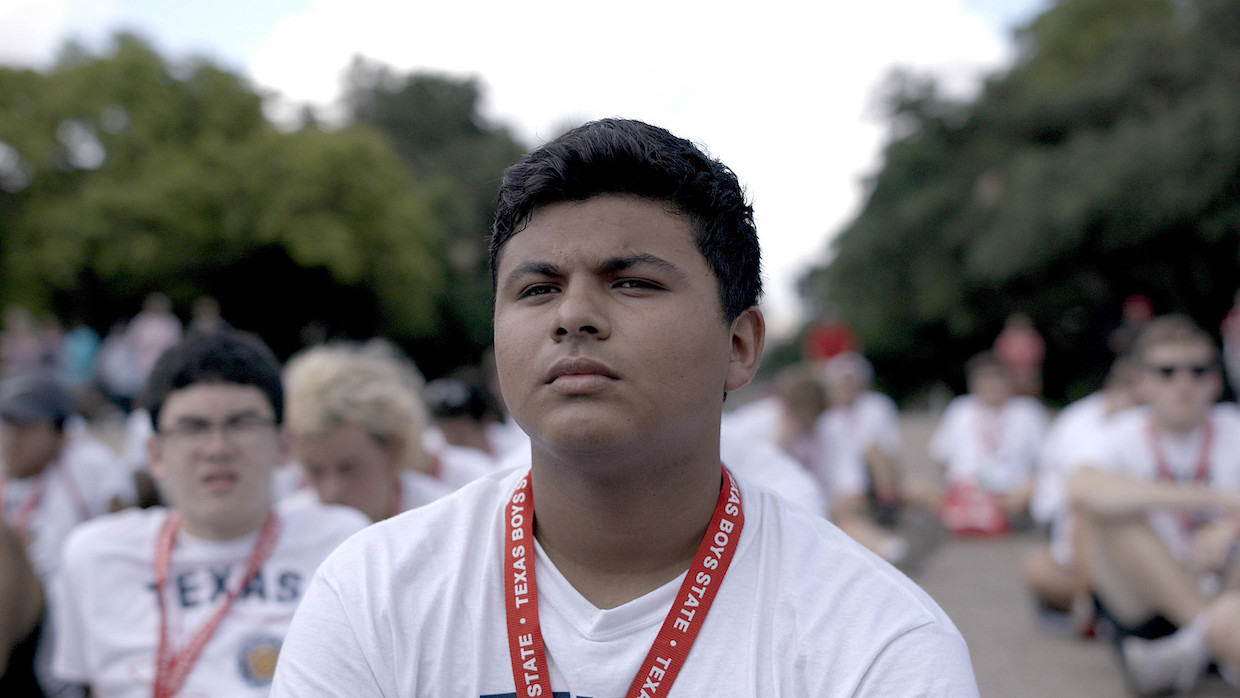 Documentary filmmakers Jesse Moss and Amanda McBaine look to 1,000 17-year-old boys from across the state of Texas in order to examine the state of American democracy in Boys State. The film follows a cohort of teenagers tasked with building a representative government from the ground up, each boy vying for the top title at the Texas Boys State competition—governor. What seems almost too akin to Lord of the Flies to result in anything similar to a functioning government actually perfectly reflects the current state of American politics. Editor Jeff Gilbert shares his insight on what made the film so frustrating yet rewarding for him, along with some of the unique challenges of entering as an editor after the filmmakers had already worked with someone else for a few months.

Gilbert: The directors, Jesse Moss and Amanda McBaine, are longtime collaborators of mine. We last worked on The Overnighters which is a film that holds a very special place in my heart. When they approached me to come and take over the edit of Boys State. I was very excited to get the band back together, so to speak.

I watched a very long assembly they had put together with another editor and knew immediately that I wanted to get involved and help bring the film to the finish line. What struck me, even in its earliest iteration, were the characters. The young men in the film possessed idealism and ambition and I connected with them emotionally in unexpected ways. Making that sort of resonant connection is a critical component that drives my decision making process about whether or not to get involved in a project. So the combination of my excitement for working with Jesse and Amanda again, coupled with my enthusiasm for the material, made this a very easy decision.

Gilbert: I came onboard after another editor, Michael Vollmann, had been working on the project for about four months. Michael did a tremendous job culling hundreds of hours of footage into a chronological assembly, so the clay wasn’t as raw as it usually is when I start cutting a film.

My goals were broadly to craft the best, most compelling version of the story there could be—to tighten the narrative and infuse it with the deeper themes that attracted Jesse and Amanda to the Boys State program. After watching the three and a half hour assembly, I jotted down some top-line goals that ultimately we were able to achieve. The first thing I needed to do was simplify the story. The Boys State event itself compresses a mock electoral and legislative process into a week, amongst 1,000 teenage boys. Representing such a layered and chaotic event is a real challenge —so streamlining all the layers into a propulsive, character-driven story that was complex without being confusing was an exciting challenge.

I also wanted to bring more character development to the cut. I spent time building out character backgrounds and getting to know the boys a bit better with an aim toward understanding from where their instincts and ideas arise. Some other goals I defined for all of us in the edit were to sharpen the dramatic turning points of the narrative so that the key events had maximum impact on the characters’ journeys. Lastly, and perhaps the most elusive part of the process was finding a balance between the “game” of campaigning, which drives the plot, and dramatizing the civil discourse which elevates the theme and deeper relevance of the story at large, which is ultimately about democracy itself.

Gilbert: The most critical part of the editing process is establishing a trust between director and editor and finding a way to communicate and collaborate so that all creative partners feel empowered and unafraid to try and fail. Ultimately editing is a process of trial and error and personal instincts. Finding this balance is extremely hard as we all see things our own way and, as artists, have our egos wrapped up in every decision. Luckily, I have a long working relationship with the directors so we were able to establish a way of sharing and implementing ideas in a way that we all trusted were in the best interest of the film itself.

Process-wise, we didn’t share the film with too many people for notes. We had two screenings for trusted peers and took input from our insightful executive producers at Concordia Studio along the way, but mostly we just listened to each other and trusted that our collective instincts would guide us toward the most interesting version of the film.

Gilbert: One of the great early influences on my desire to edit came from interning in Jay Rabinowitz’s cutting room on Jim Jarmusch’s Ghost Dog. The creativity of their collaboration, their mutual respect and admiration for one another made a lasting impression on me. I’ll never be as cool as Jay or Jim, but I’m at least trying maintain an artistic integrity like I witnessed amongst the two of them in that short time.

My guiding light in this whole process has been to trust my gut and find collaborators who respect my voice while also bringing a perspective that challenges me to grow. I find that if I simply work on films that I’d be genuinely excited to see, the rest tends to work itself out.

Gilbert: For Boys State we edited on Adobe Premiere Pro. I had never worked on a feature film project with Premiere, but since the project was set up by a previous editor, the decision to use Premiere Pro was inherited. That said, I’m glad I got the opportunity to learn the program as it’s a very robust and intuitive.

Gilbert: There was a particular sequence that was restless throughout the edit. These scenes were part of our two state party chairmen’s, Ben and René, story. The work they had to accomplish within their parties had a somewhat subtle effect on the larger Governor’s race, which is the story spine, so it took a lot of trial and error to find a home for these critical scenes. We needed to highlight the contrasting experiences of the opposing party leaders in order to build their characters, yet we needed to do so without deflating the energy of the race itself. Finding the right balance was tricky but in the end I think we found the fight equation. Sometimes when the placement of a scene isn’t perfect, but you know it has a larger function and can’t be discarded, it’s important to be okay with the notion that there is, at least, no better place for that sequence to go—and then act like it’s the perfect place.

Gilbert: Our assistant editor, Connor Hall, worked with the team at Mind Bomb to enhance some phone screen composites in order to make social media posts amongst the boys more impactful.

Gilbert: This film is meaningful to me on many levels. It’s a film that reinforces some concern that I have around some dark political instincts yet it’s also a film that expresses hope. I think my understanding and personal reaction to the film shifted over the course of a year in a way that reflects my larger purview about our contemporary political crisis. When we started this film Donald Trump was relatively new in office, which angered me in a very deep and raw way. I felt hopeless. Bearing witness to the tactics he used to gain political advantage being reflected by a younger generation of bright boys in our film was hard for me. As a result my perspective on our story had a very cynical bend.

However, as time passed over the course of the edit and we moved closer to an opportunity to turn the page in our country, my perspective shifted. I started gravitating more toward the characters in our film whose hearts and actions are filled with idealism. I started believing in their hope in a way that I didn’t earlier in the edit. So over the course of a year, I went from wanting to express a poignant cynicism in our story to embracing a more optimistic perspective about what this story could inspire.