Sundance 2020 Dispatch 2: Exil, The Earth is Blue as An Orange 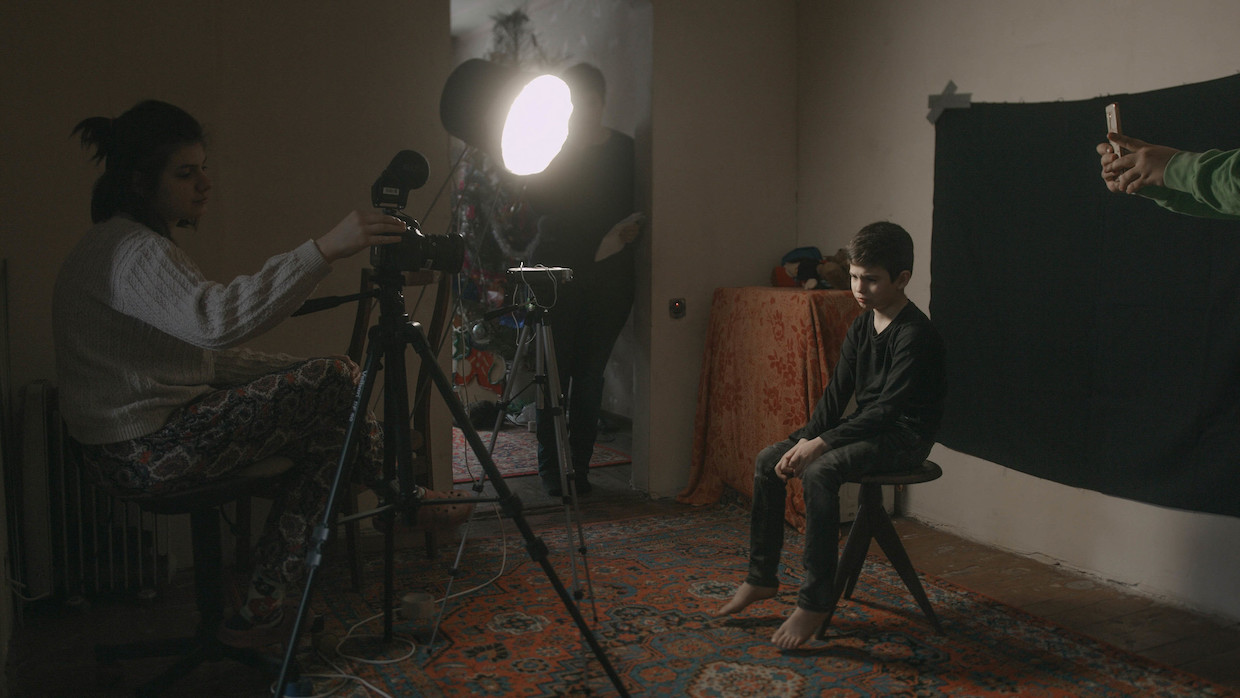 The Earth Is Blue as an Orange (Courtesy of Sundance Institute)

In the very first scene of The Social Network, Rooney Mara tells Jesse Eisenberg that he may go through life thinking that girls don’t like him because he’s a nerd, but “that won’t be true. It’ll be because you’re an asshole.” That line rang through my head all through Visar Morina’s Exil, Komplizen Films‘s first Sundance world premiere, and was directly echoed near its end by Sandra Hüller—star of Komplizen co-founder Maren Ade’s Toni Erdmann, here the long-suffering wife of Albanian immigrant Xhafer (Misel Maticevic), who’s convinced he’s being discriminated by German society. “Did it ever occur to you that it’s not because you’re a foreigner,” she asks, “but because you’re an asshole?”

This may seem like gaslighting. Xhafer feels like he’s never allowed to forget, no matter how many years he’s lived in Germany, that he’s an other. In the very first scene, Xhafer (who has to keep telling people how to say his name; they often say “what?!” the first time they hear it) finds a dead rat hanging in a noose at his home’s gate. Most of his colleagues seem to either hate him or actively withhold information he needs to do his job for no real reason other than (at best) petty office politicking or (quite probably) active xenophobia. At a particularly ghastly team meeting, Xhafer’s boss, Herr Koch (Uwe Preuss), salutes the room for setting differences aside, working together, and being stronger as a unit than they are individually before asking Xhafer “Where are you from again?” The room then claps for him, an example of especially gross tokenism in action. (It’s indicative of how much American business “culture” has shaped global corporate ethos, creating concepts that didn’t need to exist and couldn’t previously be articulated in other languages, that Koch uses the English word “team,” which often means “stay and work unpaid overtime because everyone else is. Go team!”)

On the other hand, that unlikely applause is one moment of many in which the potential gap between reality and fevered hallucination is unclear, and Xhafer really is somewhere on the asshole spectrum—at the very least, he’s sleeping with Hatique (Flonja Kodheli), a fellow Albanian on the cleaning crew at his office (unacknowledged power imbalance!), and he doesn’t have the excuse of everyone being in an open relationship in 2020. An interesting question Exil raises (nature/nurture varian), is how much someone who’s (presumably) good at their job but also kind of a jerk can be blamed for having their worst tendencies bloom in a hostile environment—what’s a justifiably hostile response to an environment freighted with unexamined racisms/sexisms et al., and when does that stop being an excuse? Exil doesn’t seek an answer, nor is that its responsibility.

This is a promising, sometimes jarringly funny sophomore feature from Morina (his first film Babai, which I haven’t seen was Kosovo’s most expensive ever), a Kafka-esque catalogue of flavors of frustration, with numerous people withholding crucial information for the vaguest reasons (“Today is not good”). From the get-go, Morina displays a strong eye for widescreen composition, using offscreen space to jolt the viewer in ways big (a scare reminiscent of the bit in It Follows when a window suddenly has an object jarringly thwack against it, weaponizing a seemingly innocent space) and small (Xhafer sitting in an office, waiting for a meeting, only to have a previously unseen door protrude frame left when someone opens it). “Promising,” of course, can be a euphemism for “flawed,” and this 121-minute feature is entirely too long—the most generic go-to critical complaint, but I can pin it down here. With DP Matteo Cocco, Morina deploys dozens of Elephant-esque Steadicam shots through hallways, almost entirely those of Xhafer’s workplace, but every one is basically the same lighting/rhythm/sound/duration-wise, and the effect goes from hypnotic to redundant quickly. Cut those down to some erratic shards, mirroring Xhafer’s instability the way Benedikt Schiefer’s effectively percussive score does, and you’d lose a good chunk of time and gain a good deal of instability. No matter: I’ll keep an eye out for Morina’s future work.

Iryna Tsilyk’s feature debut, The Earth is Blue as an Orange, is a solid, occasionally better than that nonfiction film that very lightly toys with reality/fictional boundaries. Embedding herself with the Trofymchuks, whose home is near the Donbass region, Tsilyk begins with the family at home, getting ready to work on a home movie. Quite literally, and not for one-set cost-saving reasons: with shelling going on outside, it’s best to keep it indoors. Mother Anna and her children face the camera, black butcher paper serving as their backdrop, giving first-person testimony a shot. There is, already, an awareness of what it does (or “should”) look like to live in a war zone, with daughter Nastya trying to compose her giggles into something more somber (“Just a second. It should be tragic”). Youngest son Vlad deploys the Universal Pictures clapper to mark a take and Tsilyk unnervingly cuts to the film’s sole horror-movie-loud bomb explosion sounds. The accompanying footage (credited to cinematographer Yuri Gruzynov) is, understandably, rough: no night lighting, handheld as shells drop.

These are the only images of their kind in Earth, with Tsilyk and DP Viacheslav Tsvietkov generally, though not exclusively, favoring tripod discipline—if it’s not handheld, no one’s going to lose frame when the bombs come. The shelling sounds are background ambience rather than dropped jolts (although having bombs as, basically, normative room tone is plenty unnerving in its own right). Without overtly marking time’s passage, Tsilyk follows along, making a loose throughline of the other daughter, Mira, being accepted to film school (on a scholarship!) before returning home—in the interim, the family relocates to Kiev to wait the combat out. It’s unclear exactly how formalist-leaning Mira’s education is, but when she comes home and work resumes on the family film production she’s got firmly held views: she absolutely will not shoot a panorama of the city, per mom’s demand, to show that while the locality is ruined her home is a “normal, civilized house.” Mira pushes back: “But why do I need to show the panorama?” Frustrated that her mother won’t let it go, she spits out the ultimate insult: “Get yourself a a drone and do whatever you want.”

Earth is only lightly meta—many scenes in which Tsilyk’s gaze has many others with iPhones capturing their own perspectives within it, bits that are almost immediately revealed to be staged for Mira’s project. (Unbelievably, this extends to her somehow getting some soldiers to let her mount cameras inside and outside their tank, then act for the camera.) Tsilyk avoids unnecessary emotional overegging (no maudlin score to underline that Bombing Is Bad, etc.), even if the fragmentary family portrait never quite coalesces to a greater sum. The most interesting part happens at the very end, when Mira finally screens her short (titled 2014) for friends and family: what we see of it is completely unlike Tsilyk’s film, extremely stylized red-lit strobing flashes of her family scurrying into the basement in darkness, an aesthetic completely unlike Earth‘s, raising all kinds of possibilities for how a new, younger generation of filmmakers will find their own ways to resist somber cliches about warfare.