“There Were Clearly Other Things Going On, From Klan Involvement to Pedophile Rings…”: Maro Chermayeff on the HBO Docuseries Atlanta’s Missing And Murdered: The Lost Children 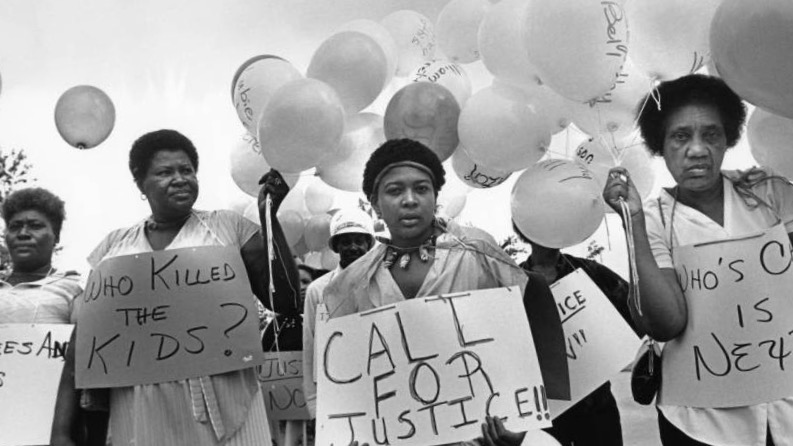 by Lauren Wissot
in Directors, Interviews
on Apr 20, 2020

HBO’s Atlanta’s Missing And Murdered: The Lost Children, a five-part docuseries executive produced and directed by Sam Pollard and Maro Chermayeff, along with Jeff Dupre and Joshua Bennett, is an intricate reexamination of one of the most horrific events in that southern city’s not-too-distant history — the kidnapping and murder of at least 30 (though likely more) African-American children and young adults between 1979 and 1981. Though the crimes ultimately would all be pinned on one man, a 23-year-old oddball named Wayne Williams, the case has now been reopened by current Atlanta Mayor Keisha Lance Bottoms. The case was the throughline for the most recent season of the David Fincher-produced Netflix drama, Mindhunter, and now, in the non-fiction world, it finds Pollard and Chermayeff weaving together archival footage, revelatory court documents, and a wealth of new interviews with those who lived through the tragedy (from still-grieving relatives to suspicious lawyers and reporters). In the process the acclaimed filmmakers unwind what had been a tidy tale about a prolific serial killer into a damning indictment of an entire city filled with self-serving secrets.

Filmmaker was fortunate to catch up with Chermayeff soon after the airing of the docuseries’s third installment. (Episodes drop every Sunday throughout the month.)

Filmmaker: So did this project originate at HBO? How did you and Pollard connect to collaborate on the docuseries?

Chermayeff: Sam produced and directed the feature documentary Maynard, which has a small sequence about Mayor Maynard Jackson during the time of the Atlanta child murders. The Show of Force production company (myself, Jeff Dupre and Josh Bennett) were inspired to work with Pollard, and believed that a larger and more elaborate look at this period and this story was merited. So we all put together a proposal and brought the series to HBO, where we were introduced to John Legend and the team at Get Lifted. We all decided to work together and then also to bring on Roc Nation as part of the EP team.

Filmmaker: How did you split up the filmmaking duties? Were there certain areas each of you took responsibility for?

Chermayeff: All of us produced/executive produced the series in full. We determined together in collaborative dialogue and research which way we wanted the series to go — the direction of the story and what the tone and style of the series would be. We then produced the material together — each of us doing multiple interviews, shooting exteriors and visuals, and preparing drone and specialty shoots. We were also on the whole present at each others’s interviews, adding questions and focus as we saw necessary to enrich each episode.

As such, each of us have interviews which appear across the various episodes. During the post phase we determined that each director would focus on different episodes, and as directors work with the editor to produce the final series. Sam and I chose to work together on two episodes, as we have a long history of collaboration, and we felt that episodes one and two “set a table” that makes them unique.

As a team we continually watched each others episodes. Once a month the entire team (directors, editors, and archival producers and associate producers ) screened the full series together to keep the stylistic integrity of the overall piece and to give notes and weigh in on the direction that the story was taking across each hour.

Filmmaker: So what was editing process like? Focusing on such a high-profile case that generated a wealth of material to begin with must have been an enormous task.

Chermayeff: The amount of material in this series was quite large. We conducted over 50 interviews. And the archive material, sourced by veteran archival producers Amy Schewel and Judy Aley, brought this time and period to life, despite most of the material being shot some 40 years ago on various stocks and tape.

As we crafted our story along the way we continually sourced and found new materials, and materials that covered the specific parts of the story we were focusing on (as well as the people we were focusing on). We also wanted audiences to see the never-before-seen images and materials that for many reasons had remained virtually untouched over the years. This was a very large and significant case, so news outlets and journalists had filmed extensively over a multiyear period.

Filmmaker: You also seemed to have reached out to every living affected member of the community imaginable. How did you decide which characters to spotlight onscreen?

Chermayeff: We reached out to many many members of the community and those involved directly in the story, from family members, to law enforcement, to historians and journalists. We had over 30 murders to consider, so we knew that certain cases would take more focus than others. We chose these cases and stories based on criteria that helped to move our story forward. Did we have an amazing living relative who could help bring this story to light, and was this a case that turned the direction of the investigation? The mayor and the chief of police of course earned their place by reopening the case in 2019 as did others in law enforcement by being authentically involved at the time.

Filmmaker: After listening to the “Atlanta Monster” podcast I was pretty sure about where I stood when it came to what Williams was guilty of. But now after watching your series I’m not so certain. (That said, Williams is not a sympathetic character in any portrayal I’ve ever heard or seen.) Did your research bring you any closer to an opinion as to the extent of his culpability? In light of the many systemic failures, did that ultimately even matter?

Chermayeff: We all listened to the podcast, but with no more focus than we’d watched any of the other films made over the years. We felt that on the whole almost all of these approaches left the listener/viewer with the sense that Wayne Williams was guilty not only of the two murders he was charged with, but of the other murders by association. We approached the story with a much more open mind. We questioned numerous elements of the case right from the start and asked ourselves to question each case at a time.

For example: Was this a murder at all? What are the fact and known elements of this particular case? How was the investigation handled? What was happening in the city of Atlanta, and what were the realities of the overall investigation(s) that prompted a potential need to “find the killer” and shut down the cases? As a team, we essentially reinvestigated the cases ourselves and spoke to many many people.

During the entire process of making this series we also spoke to Wayne Williams many times. He is without a doubt a complicated person. His position of complete innocence has not changed over 40 years. We often asked ourselves throughout the entire course of filmmaking over multiple years, Did Wayne have some involvement? No involvement? Was Wayne the sole killer of some 29-plus individuals? While people always want definitive answers, that is not the reality of this case or of our legal system usually. We know from advanced technology and racial biases that people are wrongfully convicted at an alarming rate. Was Wayne wrongfully convicted? This is up to the viewer to consider while taking in the new material and thoughts that we have brought forward in this story – including of course taking a clear look at some of the other suspects and alternative theories.

What I feel confident about is that Wayne Williams did not receive a fair trial and that Wayne Williams was not given a fair chance to appeal this case. During the appeal the universal statement on the witness stand of “I don’t recall” on behalf of almost all law enforcement involved was remarkably suspicious. There were clearly other things going on – from Klan involvement, to pedophile rings, to other potential suspects who knew certain victims – that makes it almost impossible to attribute all these crimes to one person. There seemed to be a rush to judgment, leaning on questionable science and slim evidence, that Wayne was the perpetrator in order to stop this story from going on and tarnishing the city of Atlanta. In our ultimate conclusion there was not clear evidence or witnesses or any solid information that connected him alone to these killings. And the results of the investigation did not confirm Wayne’s guilt at a level that would allow him to be convicted as one of the most repugnant serial killers in American history.