The Audience as a Virtual Jury: Roee Messinger on Tonight’s Screening of American Trial: The Eric Garner Story 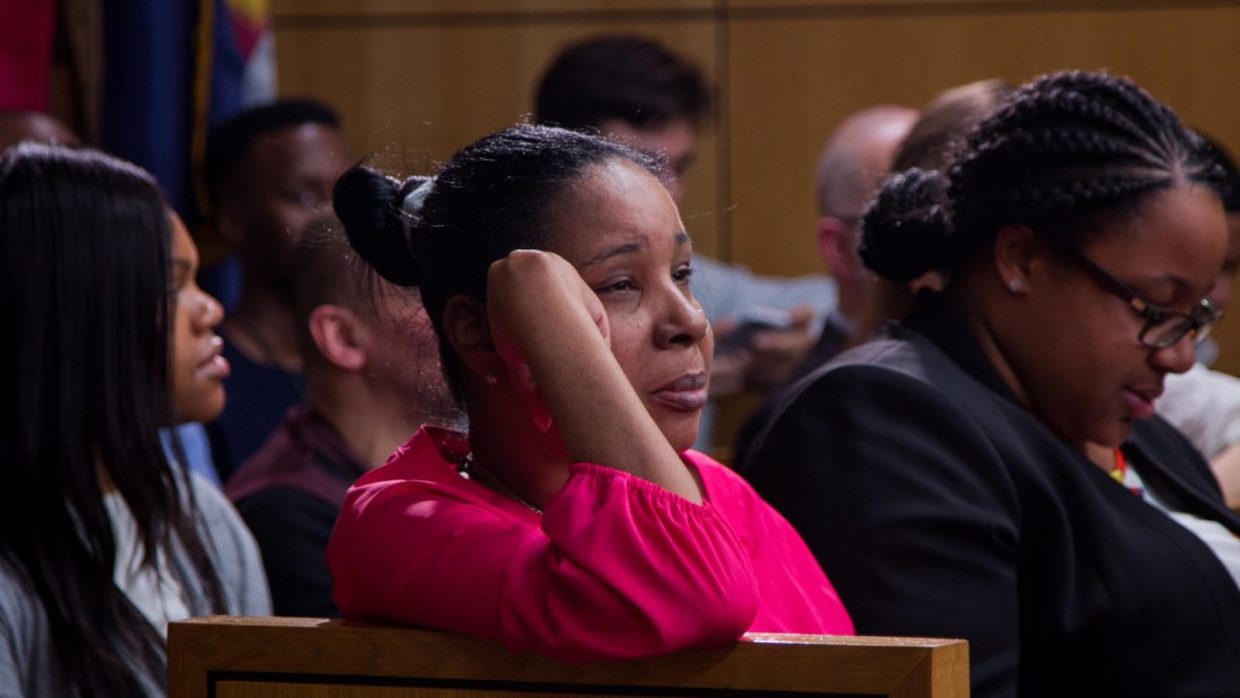 by Lauren Wissot
in Directors, Interviews
on May 21, 2020

How does one relitigate a case that was never litigated (outside the media) in the first place? This is the challenge at the heart of Roee Messinger’s American Trial: The Eric Garner Story, which premiered at last year’s New York Film Festival and releases online today May 21st, accompanied by a live stream Q&A and interactive audience component. The film is an unscripted courtroom drama that casts real-life prosecutors and defense attorneys (though none directly involved with the 2014 case of the NYPD officer videotaped choking Staten Islander Eric Garner to death), alongside real-life evidence, expert testimony, and rules of criminal procedure. Add in the real-life witnesses, and even the victim’s widow Esaw Snipes Garner, and American Trial transforms a “what if” thought experiment into a smart and sophisticated, cinematic reckoning.

Though Officer Daniel Pantaleo ultimately was never brought to trial, on May 21st the character Officer Pantaleo (played by actor Anthony Altieri) will be. And the audience/jury, via online voting during the virtual screening, will determine his fate. Which is why Filmmaker decided to reach out to Messinger a week prior to “the verdict” (and the film’s online release) to learn more about his unusual hybrid.

Filmmaker: So how did this project — including its concept and novel structure — originate?

Messinger: I was in my second year of film school when the decision not to indict Daniel Pantaleo came through, back in December 2014. I was living in Harlem at the time, and as a foreign student who had only moved to the US a year earlier (I’m originally from Israel and grew up in Mexico) it was really hard for me to wrap my head around what seemed to me like such a blatant injustice. It was clear that so many people thought the decision should have gone the other way, that Pantaleo should have been indicted.

Then it occurred to me that since I was living in New York, everyone who would have testified in the trial if it had happened was probably within a 20-mile radius from me. So it might not be too difficult to find them, and see what the trial might have been like. That’s how the idea came to be.

A few months later, after I’d graduated, I met with Esaw at the one-year anniversary rally in memory of Eric Garner and pitched her the idea. She was very interested, and we’ve been working on it together ever since.

Filmmaker: How did you go about casting all the characters, including the thoroughly convincing actor who plays Officer Pantaleo?

Messinger: I must have gotten in touch with about 60-80 different attorneys, and interviewed probably two dozen before finding the right cast of attorneys. The witnesses required a lot of research and leg work. The attorneys and I worked out the main arguments for each side, and then they told me what witnesses they needed to make those arguments. I went out to find them an eyewitness, a forensic pathologist, a use of force expert, etc. As for the only actor involved, Anthony Altieri —  who I agree was phenomenal, especially considering how challenging it is for an actor to work off-script and with a cast of non-actors — our casting director Lynn Marccola had a few people in mind but said I should really audition Anthony. After his audition I told her there was no need to audition anyone else for the role.

Filmmaker: As someone born in Israel and raised in Mexico you seem an unlikely director to tackle the Eric Garner tragedy. Did you ever worry that as an “outsider” filmmaker you might not be the right storyteller for the subject?

Messinger: I think that the standard for being the “right storyteller” for any particular story doesn’t depend on your passport or even your heritage. It depends on your perspective on the story, your unique approach to telling it, and most importantly, to the burning desire you have to tell it.

If you go to bed at night with the story, and wake up in the morning with the story, and won’t find peace until you’ve told the story, then you’re probably the right person to tell it. I think that as a non-American I’m able to bring a fresh perspective that an American director wouldn’t necessarily have had. I also think that in the age of identity politics, I felt more free than an American director would have felt when dealing with matters of such high sensitivity.

Filmmaker: This upcoming virtual screening with the interactive component, in which the audience gets to vote on the verdict online, is such a savvy idea, especially now that all the cinemas are closed. Was this in the works before the global pandemic shutdown?

Messinger: Giving the audience the opportunity to participate and “democratizing” the filmmaking process was something that we thought of all along. We had a few ideas as to how to go about it, but we weren’t sure exactly what was the right way.

Once the pandemic hit and a traditional theatrical release was not in the cards (at least for the time being), this option was suggested by our distributors at Passion River. I thought it was a really good idea. I hope that further down the line, when the film moves on to cable or streaming, that this interactive component is maintained. There’s really a lot of different things you could do with it.

Filmmaker: The only real-life major character who experienced the tragedy itself is Eric Garner’s widow Esaw Snipes Garner, who is truly heartbreaking in the film. How did you convince her to come onboard? And, considering you include a scene in which she completely breaks down, do you feel at all conflicted about having featured her?

Messinger: So first off, James Knight really is an eyewitness to the incident and really sat on that stoop with Eric Garner on July 17, 2014. Dr. Baden and Dr. Hua are real forensic pathologists who really reviewed the autopsy report. (Dr. Baden actually was hired to perform a second autopsy.) And all the retired cops are real retired cops who have often testified in court previously as expert witnesses.

As for Esaw, it didn’t require any convincing. I pitched her the idea when we met almost five years ago, and she really liked it. I know that other filmmakers have approached her with all kinds of ideas, but for some reason she and I really hit it off and she wanted to go with my idea. Naturally, nothing was done without Esaw’s consent. You could never do a film like this without the absolute consent and full support of someone like Esaw, so there was never any conflict.

If Esaw had not been interested in making the film it would have never been made. And once she was in, I had an obligation to her to make it the best film I could possibly make. She knew that she would be filmed, and we prepared her for the fact that this would feel very real. I think that sharing her experience was part of what was important to Esaw to begin with, which is why I think she was so open and revealing when the cameras were turned on. In almost five years of knowing each other and working together on this film we’ve become very close. I think she’s very glad that she was given a chance to tell her story, and I’m incredibly thankful to her for giving me the opportunity to tell it the way I thought it could be told.