“This Whole Movement is about Performance”: Daniel Lombroso on his Alt-Right Doc White Noise 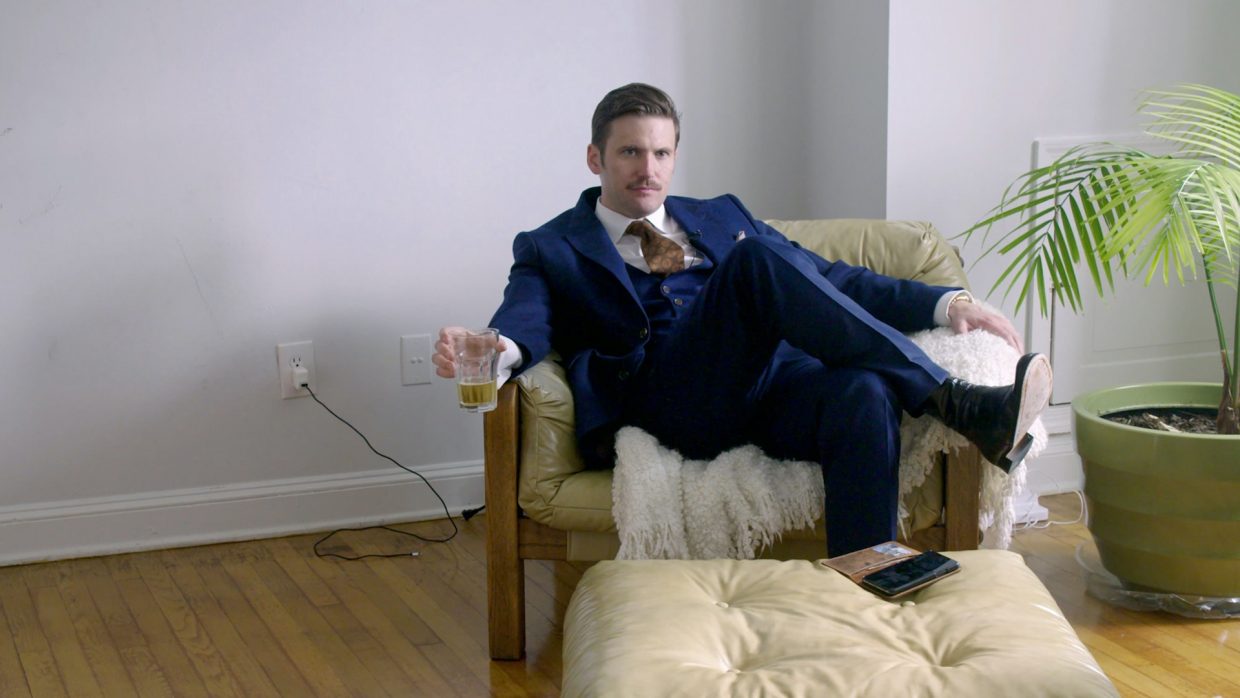 by Lauren Wissot
in Directors, Festivals & Events, Interviews
on Jun 18, 2020

White Noise, the first feature-length documentary from The Atlantic, often plays more like it was sprung from the mind of Christopher Guest. Director Daniel Lombroso, who’s traveled throughout the world to shoot award-winning shorts for the magazine’s website, exploring everything from Russian espionage to Israeli settlements, now trains his lens on the alt-right — specifically on three of its biggest stars. There’s Lauren Southern, who seems to be crafting herself into a sort of Ann Coulter for the YouTube generation. Also conspiracy theorist and sex blogger Mike Cernovich, who eventually dispenses with fascist ideology in favor of the more lucrative dietary supplements grift, a la Alex Jones. (I guess the sexy conspiracy theories market was a bust.) And then there’s the notorious Richard Spencer, who traded in his childhood dream of becoming an avant-garde theater director for a career in what can only be described as bizarre, racist and xenophobic performance art. (Honestly, I cannot watch Spencer give a speech without thinking of those old “Master Thespian” skits on SNL. That said, when it comes to avant-garde stunts, “Twinks4Trump,” the creation of Lucian Wintrich, who’s also featured in the film, is admittedly pure genius.)

A week prior to the film’s AFI Docs Film Festival virtual debut on June 20th, Filmmaker reached out to Lombroso to learn more about his four-year journey down the far-right rabbit hole.

Filmmaker: You’re an in-house filmmaker with The Atlantic who’s directed a number of shorts for the site, though this is both your and the magazine’s first feature-length doc. So were you sent out on assignment to cover the alt-right and organically ended up with enough footage for a feature — or was this originally a feature-length project from the start?

Lombroso: I pitched coverage of the alt-right in 2016, back before the movement was well known or receiving mainstream attention. A lot of The Atlantic’s Jewish journalists and journalists of color were receiving vile, hateful messages from internet trolls, but it was unclear who these communities were and what they wanted.

I shared what I was finding with Kasia Cieplak-Mayr von Baldegg, the executive producer of The Atlantic’s video studio. She immediately understood the importance of covering this issue and gave me the go-ahead. In a short documentary profile of Richard Spencer a few months later, I captured footage of his followers breaking out into Nazi salutes, which went viral and clarified the movement’s dangerous agenda.

After the Unite the Right rally in Charlottesville turned deadly a year later, we knew this documentary had to be a feature. There was a journalistic imperative of capturing this once-in-a-generation wave, and through my existing coverage I had developed rare inside access. At first I balanced the feature with my staff responsibilities, which included producing explainers, short documentaries and animations. But in the fall of 2017 we had strong footage unlike anything in the space. So Kasia and our editor-in-chief Jeffrey Goldberg gave me the go-ahead to focus almost exclusively on White Noise. I’ve always wanted to direct features and couldn’t imagine a more urgent first project.

Filmmaker: I read that you spent over four years documenting the far-right in 12 states and five countries — and yet White Noise is mostly an up close and personal look at just three of the movement’s North American stars. So why did you decide to focus almost exclusively on this trio? Is there another film in the works with the international provocateurs?

Lombroso: The alt-right is a personality cult. Its leaders aren’t only racists, they’re also internet influencers, their every tweet dissected and followed by thousands. To understand the big idea — how hatred works — I had to get down to the micro. And that’s the characters, their contradictions, their insecurities. Anything more than three main subjects would have been very hard for an audience to understand at an emotional level.

I began by filming with something like a dozen subjects in order to find the best three. I went to a wedding, a Halloween party, to political events in Boston and Berkeley. We quickly realized that the key was to get unprecedented access to the movement’s most effective extremists — those who had followings in the millions and were shaping the public conversation. That just had to be Spencer, Cernovich, and Southern. Their ideas, stunningly, were reaching political figures and shaping policy in the US and abroad. I made it my mission to gain unprecedented access to each of them.

Ethnonationalism is sweeping the world. In the course of production we followed Southern to Russia, France and Belgium. She has a massive following overseas and supporters in foreign governments. This isn’t just an American phenomenon.

Filmmaker: Why did these characters give you such intimate access? They all have their own massive followings, so it doesn’t seem like they’d be doing it solely for the publicity.

Lombroso: My goal, more than anything, was to understand the interior lives of Spencer, Southern and Cernovich. There’s a misconception that the alt-right believes all press is good press. That’s true insofar as you want a quick interview — they’ll all happily sit for that because they’re in control.

White Noise’s unfiltered access was incredibly difficult to achieve. It took eight months of negotiation to convince Lauren Southern to participate in the film. Cernovich likes to project alpha but opens up in the film about his own unhappiness and his mother’s struggles with mental illness. It took hours and hours of interviews to get him there. Even though I’m Jewish I was sincere in wanting to understand their stories and how they’d arrived at their views. I think that sincerity must have come though — even as I’d push back against their most abhorrent views.

Filmmaker: So what was off-limits to your camera? What boundaries did each character set?

Lombroso: They began with restrictions, especially around their private lives. But over months of persistence — calling, visiting, getting to know one another — they slowly opened up. Shauna, Mike Cernovich’s wife, was hesitant to go on camera. However, once we spent time together shooting verite she understood the approach and decided to participate. And I’m so glad she did. Her perspective as the Persian spouse of Cernovich – who she loves unequivocally – adds complexity to the film.

Southern, in particular, was guarded about her experiences with sexism and misogyny, and it was hard to get off her talking points. But after I witnessed her discomfort with the alt-right’s sexism, she began to share much of the toxicity she dealt with as a woman in the movement. We talked nearly every week for the duration of the project. Documentary producers know this, but there’s a lot of power in simply showing up and not giving up, even if the door is shut again and again. Eventually there will be a crack.

Filmmaker: I have to admit, as a liberal viewer it was really difficult to put myself in the shoes of the fans of these alt-right figures. It’s just hard for me to take any of them seriously (especially melodramatic Spencer, who just seems to be giving a master class in bad acting all the time). So did you interview any of their followers, attempt to get inside their heads and try to understand each individual’s appeal?

Lombroso: Spencer describes wanting to be a theater director earlier in his life, which explains a lot. This whole movement is about performance, and for him especially. They’re all internet celebrities, after all.

I easily interviewed over 100 followers and continue to talk to many to this day. Within the movement each leader has a distinct appeal. Cernovich, with his genesis as a sex blogger, appeals mostly to guys who feel under-appreciated, especially by women and in the mainstream media. He, perhaps surprisingly, has an intergenerational and somewhat diverse fan base (by far-right standards). Those fans admire Cernovich’s brash political style and ability to make money off of anything.

From 2008 to 2016, Spencer wrote for obscure right-wing “academic” journals trying to mainstream the alt-right — he coined the term. Some saw him as an intellectual leader. He also has family money, so when Trump won he was in a financial and ideological position to appoint himself as the leader of the movement. But Spencer, partially for the reason you mentioned, has little following left. After the tragedy of Charlottesville and a failed college campus speaking tour he has mostly receded from public life.

Southern’s base is international. It’s the far-right in Germany, France, Australia, as well as in North America. Young nationalists around the world are radicalized by her videos. Her pseudo-journalistic framing and relatively high production values suck viewers in. Men in the alt-right also fall in love with her and develop what’s called a “parasocial relationship” — that by consuming all her media they feel that they’ve become an intimate friend.

What’s in common with all three subjects is that they promise their followers a chance to belong. A community. The film, I hope, exposes how empty and shallow that promise ultimately is.