“We Worked With as Many BIPOC Womxn Crew Members as Possible, Whenever Possible!”: Linda Goldstein Knowlton on We Are The Radical Monarchs 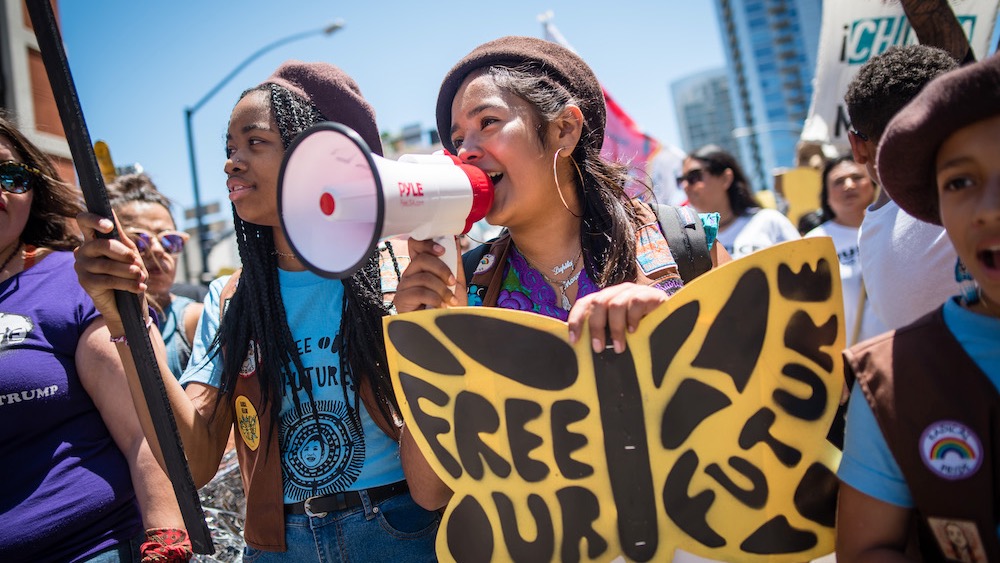 We are the Radical Monarchs

by Lauren Wissot
in Directors, Interviews
on Jul 20, 2020

Documentary, Linda Goldstein Knowlton, POV, We Are The Radical Monarchs

The Black Panther Party, with its firm commitment to nourishing and nurturing the children of Oakland’s barely served African-American community, was founded all the way back in 1966. So it’s a bit shocking that it took nearly half a century later for the Radical Monarchs to be born. Or maybe not. After all, historically, queer women of color — like the Monarchs’ tireless co-founders Anayvette Martinez and Marilyn Hollinquest — had never been given leading roles in the Black Panther show.

Fortunately, dedicated feminist and filmmaker Linda Goldstein Knowlton and her all-female team (including EP Grace Lee) are now shining a documentary spotlight on Oakland’s newest (youngest) activist movement: an alternative to the Girl Scout Brownies for girls of color that can go from toasting marshmallows to marching for Black trans lives in a single bound. Or as 8-year-old member Amia puts it at the start of the film, “Something about social justice that is fun is that we get to kind of make history — or “herstory” as we like to say it. And we get to be one tiny little part of it. ‘Cause we all know that a lot of tiny little parts can equal one big part.” (That said, by the time of the troop’s trip to the state capitol to lobby lawmakers at the end, it’s pretty clear these girls’ ambitions are far from tiny. Amia for one takes a spin on the marble floor and sighs, “I was meant to be here.” Out of the mouths of radical babes indeed.)

Filmed over three years, including both before and after the 2016 presidential election, We Are The Radical Monarchs follows not just the third-through-fifth graders as they earn their badges (in such subjects as “radical beauty,” “radical bodies,” and “radical roots”), but also goes behind the scenes with the scrappy cofounders who put their day-job skills in community advocacy and organizing to work. In other words, Hollinquest and Martinez have found a way to harness willpower in lieu of financing to expand BIPOC girl power into a nationwide revolution.

Prior to the doc’s July 20th airing on POV, Filmmaker reached out to the Emmy Award-nominated director to learn more about the inspiring project, including shooting with underage characters and ensuring diversity behind the lens.

Filmmaker: So how did you first encounter the Radical Monarchs and decide to follow not just the troop but the tireless cofounders leading these fierce (and adorable) girls?

Knowlton: I first read an article (“Radical Brownies: is this the future of girl groups?”) about the Radical Monarchs and their cofounders in The Guardian in January of 2015. They had just formed in December of 2014 with a group of 12 girls. They received a slew of press after they were photographed marching in the Oakland Black Lives Matter march – wearing their Black Panther-inspired berets and carrying a banner that read “Radical Brownies” (the group’s original name). I read their mission and vision statements and felt incredibly inspired. I mean, how could I not be? Their mission statement says, “The Radical Monarchs create opportunities for young girls of color to form fierce sisterhood, celebrate their identities and contribute radically to their communities.” Their vision statement says, “The Radical Monarchs empower young girls of color so that they stay rooted in their collective power, brilliance, and leadership in order to make the world a more radical place.”

From the beginning I knew I wanted to follow Anayvette Martinez and Marilyn Hollinquest — the organization’s cofounders — to see how two women who started a group for 12 girls would respond to the pressures of being asked to create troops across the country. At the time, both worked 60-hour weeks as community organizers, plus were taking care of their own families. And when they received requests form over 200 cities across the US for troops, they were basically being asked to start a movement. The biggest change to my initial idea of “a year in the life” of starting a movement was that we followed them for three-and-a-half years.

Filmmaker: As a documentarian, is gaining access different when you’re dealing with underage protagonists? Did you meet with the parents and kids to discuss concerns and negotiate specific boundaries?

Knowlton: It really is all about respect and trust, right? I have worked with younger protagonists in a few films == The World According to Sesame Street, Somewhere Between, and Whale Rider (though not a doc) — so I came to this film with positive examples of working with youth in careful and respectful ways.

After going to Oakland to meet with Anayvette and Marilyn to get their approval to make the film, they had me send an introductory email to all of the families to pitch myself and the project. I explained to them that when I work with children I make clear to the kids that they have the power and agency to always tell me if they are uncomfortable with the camera being on. And also that they don’t have to answer any questions that they don’t feel comfortable answering. And I explained to the families that I’m the parent of a (POC) daughter their own daughters’ ages. As a filmmaker I make the wellbeing of the child a priority.

Then I went back up to Oakland to meet with the parents in person and to answer any questions == and they all gave permission! After filming a couple of Radical Monarchs meetings and interviewing all the girls and at least one of the parents, the trust we were all building with each other really took hold. We became part of the Radical Monarch family.

Filmmaker: I believe you work with an all-female crew, though I’m not sure how many on the team identify as BIPOC. As an intersectional feminist and filmmaker, how do you go about ensuring diversity behind the lens?

Knowlton: We worked with as many BIPOC womxn crew members as possible, whenever possible! I’m LA-based, and this was my first film in the Bay Area, so I relied on recommendations from friends and colleagues to meet a new crew base. I always asked about BIPOC womxn first. Brown Girls Doc Mafia was also an incredible organization/resource that I tapped into. After that it would be about people’s availability for our shoot days.

Filmmaker: What was the editing process like in terms of shaping a cohesive story? You’ve got the Monarchs and the cofounders, of course, but also threads such as the troop expansion (not to mention the backdrop of the 2016 election).

Knowlton: In addition to all of those storylines over three-and-a-half years, my collaborator (editor and producer) Katie Flint got pregnant and had a baby. And I had cancer treatments and surgeries. The editing process was complex to say the least (especially considering we thought we were only going to shoot for a year).

In terms of shaping the story with all that footage, what finally clicked was the idea of showing the many layers of growth of the cofounders and troop one from almost their beginning through the troop’s graduation. Then we grounded that arc with what we called the “external spine” of the story – i.e. what was going on in the country, using the news headlines to track the passage of time and what the Radical Monarchs were always up against. That “click” came after filming for two-plus years.

Filmmaker: Now that the film will be airing nationwide, how are the Monarchs preparing for the media exposure? Do you worry at all that the conservative backlash — something the cofounders have dealt with since the troop’s inception — might intensify, especially now that we’re approaching yet another fraught election?

Knowlton: I’m going to let Anayvette answer this one. “Yes, anytime there is a bump in our media visibility the trolls come out of the woodwork! We’ll be closely monitoring all of our social media sites, but otherwise we’re just going to keep on pushing and focus on our work and movement. There is too much we want to do to get distracted with all the hater noise.”