“I Never Do a Oner Just Because I Can”: Mimi Leder on The Morning Show 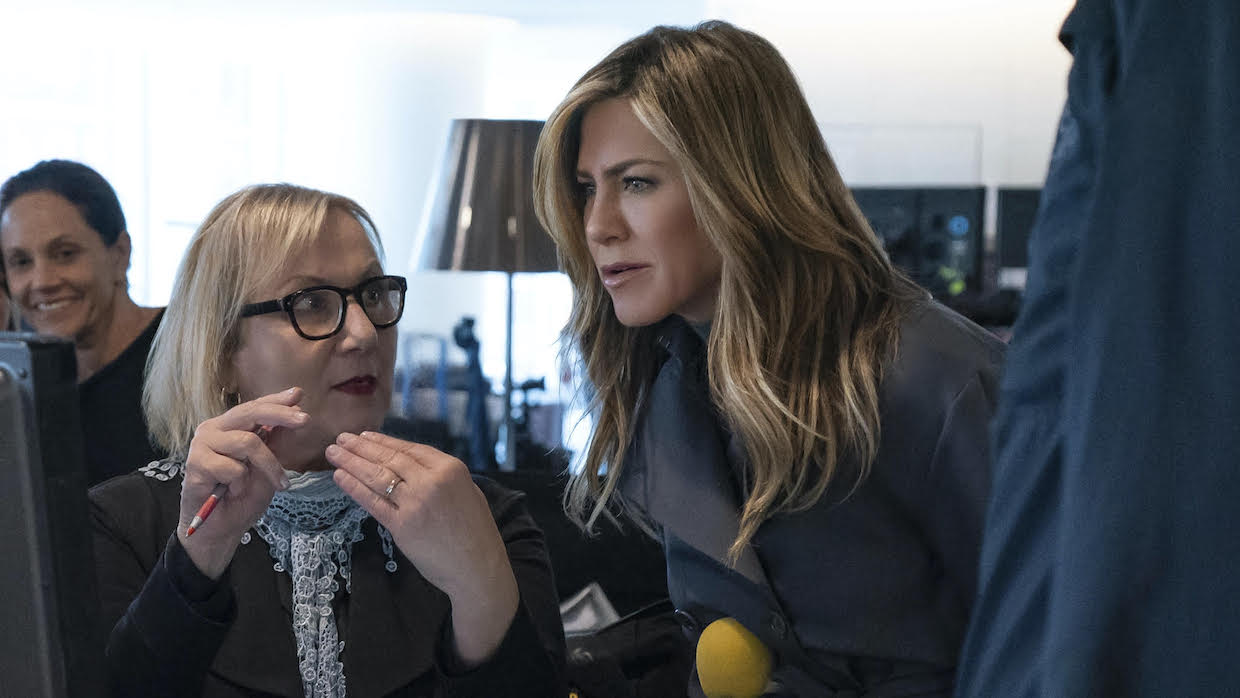 by Jim Hemphill
in Columns, Directors, Interviews
on Aug 17, 2020

In the mid-1990s, director Mimi Leder revolutionized network television with her kinetic, elaborately choreographed long takes on the medical series ER. A master of complicated blocking and the use of camera movement to plunge the audience into viscerally charged suspense, Leder also knew when to pull the visual pyrotechnics back and generate power through restraint. Leder’s command of the medium has only become more impressive in the 25 years since; her most recent feature, the Ruth Bader Ginsburg biopic On the Basis of Sex, is a master class in composition and color, and her work on the Apple+ series The Morning Show is even better—in fact, for my money, her direction of the season finale, “The Interview,” is as precise and emotionally devastating as anything I’ve seen on television this year.

The Morning Show follows the behind the scenes action at a Good Morning America/Today-esque morning news program where the staff and on camera talent are in a state of deep uncertainty following the firing of cohost Mitch Kessler (Steve Carell) for sexual misconduct. When his longtime on-air partner Alex Levy (Jennifer Aniston) pushes unknown local reporter Bradley Jackson (Reese Witherspoon) into Mitch’s spot, it’s the first in a series of increasingly risky power plays by various people involved with the show as they try to spin the situation with Mitch to their advantage. Meanwhile, a booker who has a past with Mitch, Hannah Shoenfeld (an outstanding Gugu Mbutha-Raw) struggles with the implications of what she knows and what she has experienced, her pain a ticking time bomb set to have irrevocable consequences for everyone on the show. “The Interview” brings Hannah’s story to a shattering climax, and Leder’s direction of the actors in a series of wrenching scenes is simultaneously forceful and delicate. Her use of the camera to properly present those performances for maximum impact is as meticulous as it is dynamic, employing a wide array of techniques to draw the viewer into the psychic destruction. I don’t know if I’ve ever seen a television show as good at presenting its characters’ internal states as The Morning Show, a testament to the excellence not only of the writing and acting but Leder’s flawless craftsmanship. I got on the phone with her a few days after she was deservedly nominated for an Emmy for “The Interview” to ask about her methodology.

Filmmaker: When you first came on board The Morning Show, what were your reference points? Were there other movies or TV shows that influenced you?

Mimi Leder: I was definitely inspired by Broadcast News and Network. Also, at one point in my life I watched these morning shows every day. You know, people get dressed to these shows, they put their makeup on to these shows—it’s a very safe place. I remember that feeling of what morning shows did for me, how they got me going in the morning. And I did quite a lot of research. I went with a few of my fellow producers and our production designer, John Paino, to GMA and The Today Show and examined every detail of what they really looked like, and it informed us on every level. For example, the ceilings had exposed wires, so we put that in our set. We soaked up every detail—the way the monitors were placed, everything. I wanted the show to feel very authentic and grounded and to show how big the world was, and at the same time, give it a very intimate feel, because it is that intimate feel that draws us all in as viewers.

Filmmaker: What was your philosophy in terms of contrasting the look of the morning show itself with the offices and living spaces that the characters inhabit?

Leder: Well, the morning show is a very fast paced world, so I wanted to move the camera in sync with that—that was essential. I had no rules in terms of lenses or camera movement; my DP Michael Grady and I decided that whatever worked is what we would do, meaning that sometimes when I do a show, it’s all handheld, and we never get on a dolly, or you never use the color red in the palette. In this instance I didn’t want to have any rules, though when the characters are doing their broadcast I did want the color to be really bright and warm. When we were in the hallways, or in their homes, or out in bars, I wanted it to feel very saturated with colors and have a lot of depth and contrast to show the complexity of these characters’ feelings and emotions.

Filmmaker: Since you brought up the bars, let me ask you about the way you opened “The Interview.” You start on Yanko (Nestor Carbonnel), the meteorologist character, sitting in a bar and shoot him in close-ups and fragments. Where does the idea for something like that come from?

Leder: My concept of that scene was that I wanted to do it in many cuts, extreme tight shots. Shots of his mouth, shots of his hand, shots of him drinking, crossing the line, showing fragments of what was going on in Yanko’s mind, because that scene was about a storm coming in the story. There he is, in this bar, talking to no one really, just anyone who will listen. One could have shot that scene in a very ordinary or classic way. You could’ve done wide shots of him sitting there talking, but I wanted to give it some energy. So I shot, as I said, with no rules—I was on a dolly, I did push-ins, I did handheld. I used various camera techniques to give it that feeling and editorially, we went with it. I really wanted to just start tight, like where the hell are we? I think we start on a hand, it takes a swig from the glass and we don’t know where we are. Then we reveal that we’re in a bar and we see El Niño on the TV and go from there.

Filmmaker: Later in the episode, you’ve got the opposite end of that stylistically with this great long take that involves many characters entering and exiting the scene and the camera constantly repositioning and moving from room to room. It’s reminiscent of your earlier work on ER, and I was wondering if you could talk about why you like those kinds of shots and what you feel they give you?

Leder: Yes, doing those big oners is definitely a nod to ER and what we did on that show. I think oners are very effective in dropping the audience into a scene in a visceral way, but you don’t want to force them. I never do a oner just because I can, or to show how fancy I can be. In the case of the scene you’re talking about, there’s a lot of emotional tension and everyone has secrets. If you broke it up into a lot of shots, it would feel choppy and disconnected. So, in that kind of situation hopefully you can speak with your writer and say, “I really want to connect these things, can you do this for me?” If you can tell the story in a oner the audience feels like they’re really part of it, and doesn’t even notice that it’s a oner – they just feel that they went through the whirlwind with the characters.

Filmmaker: Then you’ve got another different kind of scene, where Hannah tells Bradley her story and it’s very restrained and subtle—and extremely emotionally disturbing. What kind of environment do you try to create for the actors when dealing with that kind of sensitive, powerful material?

Leder: When you have a big scene like that, you definitely talk about it with the actors before you do it, not necessarily right when you’re shooting. It’s something to talk about early in the process. Personally, I don’t like to rehearse a lot unless it really is needed, so there was no real rehearsal; all I wanted to do was run the lines without emotion so we could decide where Hannah would rise and get the blocking done in a very simple way. We were shooting in a real location downtown, and I cleared everybody out except for the DP and script supervisor so that the actors could just figure it out—where are we and how does it feel? Once we did that I had a rehearsal for the crew so that they could see it. What you do in a scene like that is shoot everything on a longer lens so that the cameras are not in the actors’ faces. The scene is shot in a very classical way, with a big wide shot and then medium shots, medium closeups, then real closeups to get right in there. The key is not to overuse the closeups, because it’s already such an intimate and painful scene, you only want to move in when it has the greatest effect. Honestly, the performances and how personal the moment is for both of the characters meant I didn’t have to do much, and we didn’t shoot a lot of takes, either—we might have shot three takes of that entire performance from both of them. Reese and Gugu were ready—this was a scene that had been percolating inside of them for a long time.

Filmmaker: One thing that seems simple to the outside viewer but is actually quite difficult, in my opinion, is the basic thing in blocking of knowing where you want everyone in relation to each other when it’s characters talking in a room. When you have a scene like the one in Carell’s apartment with multiple characters having a powwow, do you preplan where you’re going to place everyone, or decide that on the day with the actors?

Leder: I preplan everything, then remain open to what feels right when we do it for real. Thinking it through, I wanted Carell to sit on his own couch and be an island, and I wanted Reese to be the closest to him, and I wanted Billy Crudup and Mark Duplass to be on the other side. That’s what felt organically right.

Filmmaker: What about the shots where you just hold on characters thinking? I love things like the close-ups on Aniston that just linger until I’m completely sucked into her point of view and emotional state.

Leder: We intentionally hold on shots for that exact reason, to get inside the characters’ emotions and convey what they’re feeling and thinking. There’s a shot of Jen in the pilot where I’m pushing in and we’re holding and holding forever, and it’s really uncomfortable because the character is uncomfortable—she can’t sit in her own skin at that moment. My editor put the whole shot in, she didn’t cut it short, and the network said, “Is that too long? It makes people uncomfortable.” Which is exactly what it’s supposed to do. I tried it shorter, but it didn’t hold the impact that the longer take did. So I went with my guts and convinced my partners, “This is it.” I like to do that a lot on the show because I think the writing is so good and the acting is so brilliant that it really holds. I think these actors’ faces are getting across a myriad of emotions, and I just loved getting right in there and feeling it all.