“You’re a Storyteller”: Ted Hope on Being a “Holistic Film Producer” in an Ever-Changing Industry at IFP Week 2020 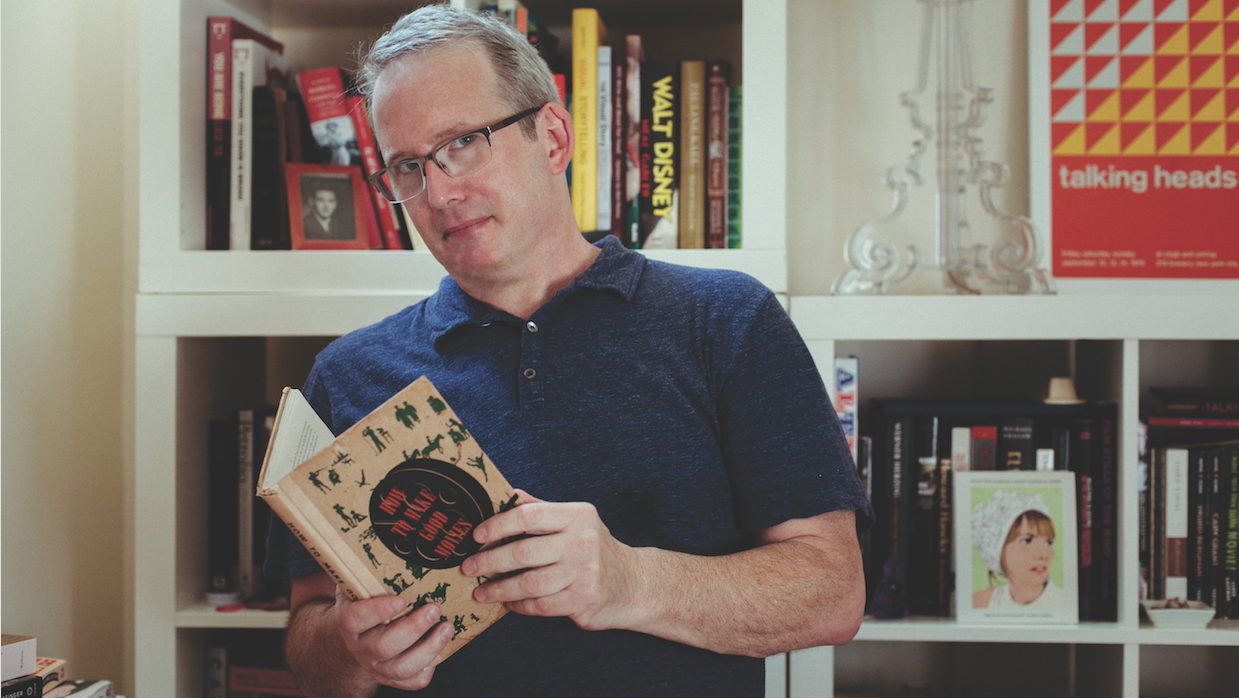 by Matt Prigge
in Festivals & Events, Filmmaking, Production
on Sep 24, 2020

Ted Hope describes himself as a “holistic film producer.” What he means is this: When he signs up for a project, he’s there from the very beginning. And he’s there throughout it all, every step, even well into its streaming after life. Every stage is interconnected, and no parts works without the other. A holistic film producer is one that lives not only in the present but in the past and the future. They also try to advance the film ecosystem and what they perceive as their community in meaningful ways. It’s to see a production from all angles at once. That’s how the legendary producer and executive — the co-founder, with James Schamus, of the production and distribution company Good Machine, who this summer stepped down from his position at Amazon — views his place in the industry. During the IFP Week 2020 “direct access” panel “Ted Hope on ‘Hope for Film,’” one of his many pieces of advice to aspiring filmmakers was to essentially not put all your eggs in one basket. Don’t be short-sighted. Look at your career as a long arc. Look at it holistically.

“To get your career going, you have to ask yourself how to sustain it,” Hope said. He credits his durability, his over 30 years operating on the more artistic side of a cut-throat industry, to seeing beyond the present moment. “A lot of it is about making key decisions upfront: to know what you will not do, to know what you want to avoid, to know the type of people you want to surround yourself with.” He says as a New York-based producer, he developed a “pattern recognition” for looming disasters. “You spot the thing that’s going to go wrong. That’s super-useful as a producer because then you can plot how to avoid that mistake.” But that pessimism, he says, is only half the job. The other half — “the L.A. side” — is maximizing positive and openness, “recognizing the beauty that surrounds you at all times,” as he puts it. “You need to develop those skills now for everything that’s going to come later.”

Hope knows how tough things can get. “This is not a sweet and gentle industry. It is not one that, frankly, is based on merit,” he said. So you have to become adaptable. “You have to ask yourself, ‘What do I need to do so I feel more positive about what I’m doing 15 years from now knowing how shitty things sometimes are.” One way to achieve that is being diverse, having many skills. “Nobody should seek to be singular in their expression,” he said, meaning that you can’t only, say, stick to features or only television or only music videos. He remembers telling an ambitious filmmaker once to make some shorts before making features. “He wanted to fight me. He said that’s like telling a novelist to write short stories or to paint pictures.” But being adaptable, having many things you can sell to the money people, is becoming increasingly important. “It’s really important to make sure that there is something that people can recognize that you have some form of mastery over,” he said. “I think that’s where we are in our industry, in this intersection of big business and artistic expression, of corporate enterprise and private enterprise.”

It’s also about looking forward to the next big things. Hope said you have to ask yourself questions, such as “How do you develop pattern recognition for where the future is going? How do you insert yourself into the wedge of where history is going that you want to be a part of.” Hope advised finding your voice and making sure people in power can see it can be valuable in wherever the industry is going. “A big part of that is your own self-recognition as an artist, how your unique voice is going to contribute to that conversation.”

But you also need others: cohorts, financiers, executives, perhaps even an agent. At this point in time, when social media has democratized parts (but not all!) of the industry, the necessity of agents is in question. But Hope thinks they can still be helpful. “Agents show that there’s business to be had, that people want to be working with you from a business perspective,” he explained. That said, they’re not your friend. “As much of you want this to be a relationship to be for life, it is a transactional business relationship and thus can be discarded at will — with a price tag, but discarded at will.” Agents, too, tend to only make themselves hard to get, only seeking you when you’re already established, not useful when you are. “They’ll do more for you when they need you most. Once they decide that they want you, that’s probably when you want to play hard to get and try to get more out of the relationship.” But agents, he thinks, can be another great cohort, a valuable member of one’s support group, who cares about us and not just themselves. This business is filled with people who see it only as a business and mean to advance their own career. A good agent is a good ally, and you need as many allies as you can get.

Then there’s the question of pitches. At what point do you take your big idea before a top executive. The short version: when you’re ready, not only with a concrete, sellable idea but also prepared to treat the person you’re pitching to with respect. At his five-and-a-half years at Amazon, Hope heard at least a pitch a day, from accomplished, famous people. And of those he’d estimate maybe five-and-a-half were really prepared in the way he’d like. “They didn’t seem like storytellers to me,” Hope said. “Many people came in and just started right on it. They didn’t treat me like a human being. They didn’t show me they could think on their feet. They didn’t make me want to have dinner with them for the next four years as we made the movie. They hadn’t even thought about that.” He trains his executives to be open and friendly when first dealing with people. He expects the same of people he meet him. “You have to show them you’re a human being first, that they value you more than they value Amazon.”

Sometimes people are too eager, rushing into projects that simply aren’t ready, or won’t achieve their full potential. “One of the biggest challenges I’ve found as a producer and an executive is the filmmakers’ desire to make something happen quickly, right there, right now, versus when it most advantageous,” Hope said. So find that sweet spot. “The sales potential is best when expectation exceeds the elements that you have. Your job is how to increase the expectation around you more than the work that you’re doing. That sounds like building up hype, but if you don’t have the goods, the hype is worthless.”

Just as Hope advises becoming a Jack of More Than One Trade, so should you consider work outside narrative cinema. Documentaries are in high demand with streamers right now, for a number of reasons. For one, they may have a built-in audience. “The more narrow their focus, the more they have a deeper resonance with that specific audience,” he said. There’s also their price. “Historically they’ve been produced at a lower price point than narrative features, but their ability to attract new customers that are passionate about their chosen subject, combined with their lower price, make them an incredibly efficient form of programming for streamers.” Imagine you’re a streamer who needs at least 50 pieces of programming a year to keep customers interested. “You know you need to get something big that will capture everyone’s attention, but you also need a cadence of newness. You think, ‘I better find things that are efficient. So you’re going to lean towards [documentaries] too.” (What’s more, he pointed out, some documentaries, particularly expositional/historical ones, are easy to make during quarantine because they may not require much additional filming. You may mostly need access to archives.)

Speaking of quarantine content, Hope finds Quibi’s lack of success disheartening, as many do. “Quibi is kind of the canary for any additional reality devices,” he said. “We’ve all consumed as part of our daily habits bite-sized entertainments. But did we really need to have a service that delivered that exclusively in some high-end manner? When you’re trying to engineer a behavior shift in the way they did, you really want to test it every which way.” Still, there’s a reason to be optimistic for the future of short-form content. “Let’s be real: How many years was video gaming going in a lesser form before it overtook the entertainment industry as we know it in terms of revenue? It had a long lead-up.” (Still, Quibi isn’t attracting even the excitement of an Atari or 8-bit Nintendo.)

Hope pointed out that some financiers and people in power are wary to experiment. He told of the time he teamed up with Lance Weiler, an early adopter of multi-platform entertainment, who’s long used the internet and social media to create content that exists on different planes. (His 1997 film The Last Broadcast, co-directed with Stefan Avalos, was the first film with an all-digital release, with certain initial screenings beamed over geosynchronous satellite.) But when Hope and Weiler tried to pitch a project told over seven platforms, they encountered wall after wall. “I realized very quickly that when we were pitching it, what executives were hearing was that this was seven ways it can fail,” Hope recalled. That’s when the pessimistic side of Hope comes out. “The entertainment industry is first and foremost about people keeping their jobs,” Hope said. He envisions a utopia in which businesses that make untold riches off of content paid those who create a comfortable wage. “You don’t have a society that recognizes that the arts generate more jobs and drive the economy in such a fruitful way that they should support it and give you room to do your work without fear of how to raise a family and pay your bills and get healthcare and an education. If they did that they’d realize it makes sense to focus the economy on supporting people who can do that. But our business is about people keeping their jobs and benefits intact.”

Until that future arrives, though, you have to find a way to make it work for you. And the best way to do that is to sell people like Hope on why you’re worth working with. “You’re a storyteller. You want to be able to tell the story of your project and the story of your career. You want to think that through,” Hope said. “The thing that’s most enticing about a project to somebody who’s getting involved with a filmmaker early in their career is their other projects. You want to demonstrate that you are a generative person who can build teams around you that are of value. You want to demonstrate that you’re not a person who creates problems, who can be difficult to manage. You’re someone who can solve problems when they happen. And you want to demonstrate that you know what their job is, you’ve considered what it’s like to be in their shoes, and you’re going to make it easier for them along the way.”