“Almost the Entire Movie is Shot on Steadicam but You’d Never Know It”: John Patrick Shanley on Wild Mountain Thyme 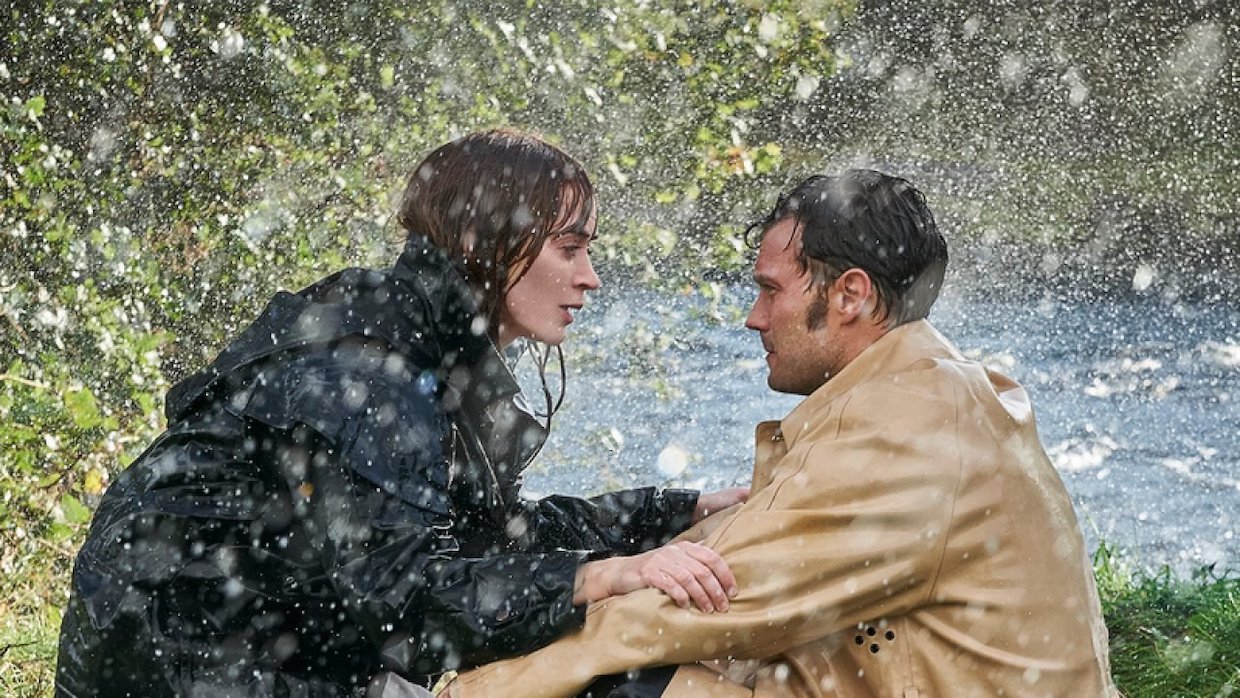 by Jim Hemphill
in Columns, Directors, Interviews, Screenwriters
on Dec 16, 2020

As a writer (Moonstruck) and director (Joe Versus the Volcano), John Patrick Shanley has created some of the funniest, most compassionate, and original romantic comedies of the past 35 years, which makes his return to the genre with Wild Mountain Thyme cause for major celebration. Adapting his play Outside Mullingar, Shanley has created his most lyrical and complex film to date, and his most moving. Jamie Dornan and Emily Blunt play Anthony and Rosemary, would-be lovers who have grown up together on neighboring Irish farms without acknowledging their mutual attraction—mostly due to introvert Anthony’s hopeless awkwardness. Anthony’s father (Christopher Walken) fears that his boy will never marry and thus never produce an heir, so he decides to leave the family farm to an American relative (Jon Hamm) who he trusts to maintain his legacy, increasing the pressure on all involved to act on their true feelings.

Shanley’s infectious love for his characters and the Ireland they inhabit make Wild Mountain Thyme his most exuberant film, generous with its pleasures: consistently hilarious dialogue, exquisite cinematography (both landscape and portraiture) and a steadily building sense of emotional risk that yields an abundance of poignant observations and insights. As a writer, Shanley crafts characters who are messy, complicated and as universally recognizable as they are specific in their details of language and behavior; as a director, he consistently finds expressive framings that add texture and depth to the characters’ relationships to each other and their physical environments. Wild Mountain Thyme is deliriously romantic and endearingly eccentric, but it’s also as weighty as a film can be when you get down to what it’s really about: questions of how we live our lives, and with whom, and why. I spoke with Shanley the day before the movie opened—it’s currently playing in theatres and streaming on demand—and began by asking him what motivated the decision to turn Outside Mullingar into a film.

John Patrick Shanley: I wrote the play with no particular future idea except to put the play on. We did it, and one of the people who came and saw that production on Broadway was Leslie Urdang, who had produced a lot of my early work. She came to me and said, “I think this would make a great movie,” and I said, “Yeah, I think it would too, because here we are in Midtown Manhattan making believe we’re in Ireland. why not go to Ireland and have the sky and the clouds and the land and the animals and all of that texture, and make Ireland the main character of the film?”

Filmmaker: Once you transpose the story to actual locations that you’re filming on as opposed to a stage, how do those locations inform the finished movie?

I walked the property to see what locations I could get out of it and found this big storage building that had a diagonal staircase coming down from the door. So I thought, “I’ll have Emily Blunt up at the top of that when he drives up, then the stairs can help create movement with the camera and she can have this conversation with him, then he can escape up by climbing over the fence which was there…” So, we didn’t build any of that, it was all there, materials which you can use to shoot a scene in an interesting way.

Filmmaker: Yeah, the locations are gorgeous and provide such a great context for the performances, all of which are excellent. How do you communicate with your actors to get them all on the same page for a piece with such a delicate tone?

Shanley: I’ve spent my whole life working with actors and love actors, and I think I’ve come to understand them in my bones. One of the things I’ve learned is that when you’re dealing with really good actors, it’s like driving a Maserati—do not hit the gas pedal hard. The slightest thing you say has an enormous effect. So, initially I prefer to say little or nothing. I watch the performance, and if I think it needs adjustment I’ll go over and say the least impactful thing I can think of, because on film it will have a huge effect. Each actor has their foibles, and you’ve got to be aware of those. In the case of Chris Walken, he said, “If I can even see you, it influences my performance. I can tell when you like something and when you don’t, even if you try to keep a stoic face.” So, I shot Walken’s first three days in a closet to hide from him so he wouldn’t be able to see my reactions to what he was doing. We got on very well, and by the time we did his really big scene had developed a lot of trust, and he and I and Jamie spent a very quiet and intense day getting where we needed to go. We all talked a little bit about our fathers and how Chris was a kind of surrogate for all the fathers of the whole moviegoing audience, and he was able to deliver that.

Filmmaker: He’s so great in the movie. How did you decide on him and the other leads?

Shanley: Well, I didn’t hire Chris for his accent, I hired him for his soul, and I got it—and he did a pretty damn good job with the accent too. I said to the dialect coach, “Just make sure whatever you give him that he stays Chris Walken.” I didn’t want to lose that, and I didn’t. He really comes through. Jamie and Emily are great actors, and the thing that they share is that they are very intelligent and have a big cloaked emotional life that they draw on. Jamie is basically an introvert and there’s a lot of awkwardness about him that he could allow out for this part. And Emily is a powerful maternal figure with a lot of cloaked passion, and she doesn’t understand why everybody can’t just get along. Her puzzlement at the lunacy of others is very good for this part.

Filmmaker: When you made the transition from writing to directing, I’m curious how you learned the craft of filmmaking. Were you able to observe the directors who directed your early screenplays like Norman Jewison and Tony Bill, and were there things you saw them do that shaped your eventual approach when you started directing?

Shanley: I would say no, because it’s very difficult to actually observe somebody directing from the outside unless you know a great deal about the process. In those early days, I didn’t. Even when I was an associate producer on Five Corners and involved with the casting and brought a lot to the movie, Tony Bill still went off in a room and figured out what the hell he was going to do on a given day. But I learned a great deal from watching film and television all my life, as a kid sitting in my living room watching everything on my beat up black and white TV. I learned a lot from reading Charles Dickens, who did all sorts of dissolves and cross-fades and stuff in his work before there ever was film. But my aspiration is really to do something that’s a personal document and doesn’t just come across as using the standard model for how to write a movie, how to shoot a movie. I don’t particularly like shooting a master and then breaking it down. I like to work the other way around, where I’m manipulating everything the camera’s going to see, then as the last element bringing in the camera and saying, “Okay, given what’s going on, where should we put the camera?” There are many other valid ways of directing, but I find that one very good for me.

Filmmaker: Well, you’re working here with one of my favorite cinematographers, Stephen Goldblatt. What were your initial conversations with him like?

Shanley: We were fortunate in that we did Joe Versus the Volcano together years before and discovered a similar sensibility on that show. On this one, it was kind of extraordinary because for reasons that I can’t even remember, he and I ended up as roommates in Ireland for more than a month before we started shooting. I was staying at this place called Mt. Falcon, which had a hundred acres of beautiful land, and we would go on walks every day. We ended up finding about a third of the locations for the film on the property, and all the time we were talking about how to shoot this scene and that scene. So by the time that we actually started shooting, we almost didn’t have to say anything to each other. It was a very good collaboration.

Filmmaker: What were some of your guiding principles in terms of how to use the camera?

Shanley: Almost the entire movie is shot on Steadicam but you’d never know it. We had this rock-solid camera operator named Peter Cavaciuti and he was able to use a Steadicam as if it was on a tripod. We had to shoot that way because we were in such confined spaces sometimes, like the Riley kitchen; we built it like an enclosed courtyard on the farm, so that the windows would be tied into real things and give us that extra level of reality. There wasn’t much room, so we had to get in really close; we could never stand way back and shoot a standard master. We just had to get right in and immediately start shooting the scene.

Filmmaker: I really loved the score by Amelia Warner, and I was wondering if you could talk about how you worked with her to create that beautiful music, which does so much to help the movie cast a spell on the audience.

Shanley: Amelia is married to Jamie Dornan, and because of that when her name first came up I said, “I like her work but I’m not going to use her, because I can’t fire her.” Then I went around the block a couple of times, finally called her and said, “Look, I’m offering you the film but be warned, I can’t fire you and that’s your responsibility, you have to do a really good job.” And she did; she was an excellent collaborator and went on to write the final song with me for Sinéad O’Connor. That was an extra treat.

One of the best ways I’ve found to communicate with a composer is through music, so the editor Ian Bloom and I spent a lot of time constructing a temp track to give Amelia a sense of what it was that I was going for. Probably the most unusual temp cue we had was The Flying Dutchman for the whole sequence toward the end where Emily comes out on her horse and Jamie comes out with his metal detector—they meet on the mountain and they run around the tree and all of that. It worked really well, so well that I thought, “I don’t know if she’s going to be able to write something as good as The Flying Dutchman,” but she came back with a good cue that cracked it right away. I just told her to make it even more melodramatic—”frighten yourself”— and she did, and I think that she’s probably happier with that cue than any other cue in the film.

Jim Hemphill is the writer and director of the award-winning film The Trouble with the Truth, which is currently available on DVD and streaming on Amazon Prime and Tubi. His website is www.jimhemphillfilms.com.