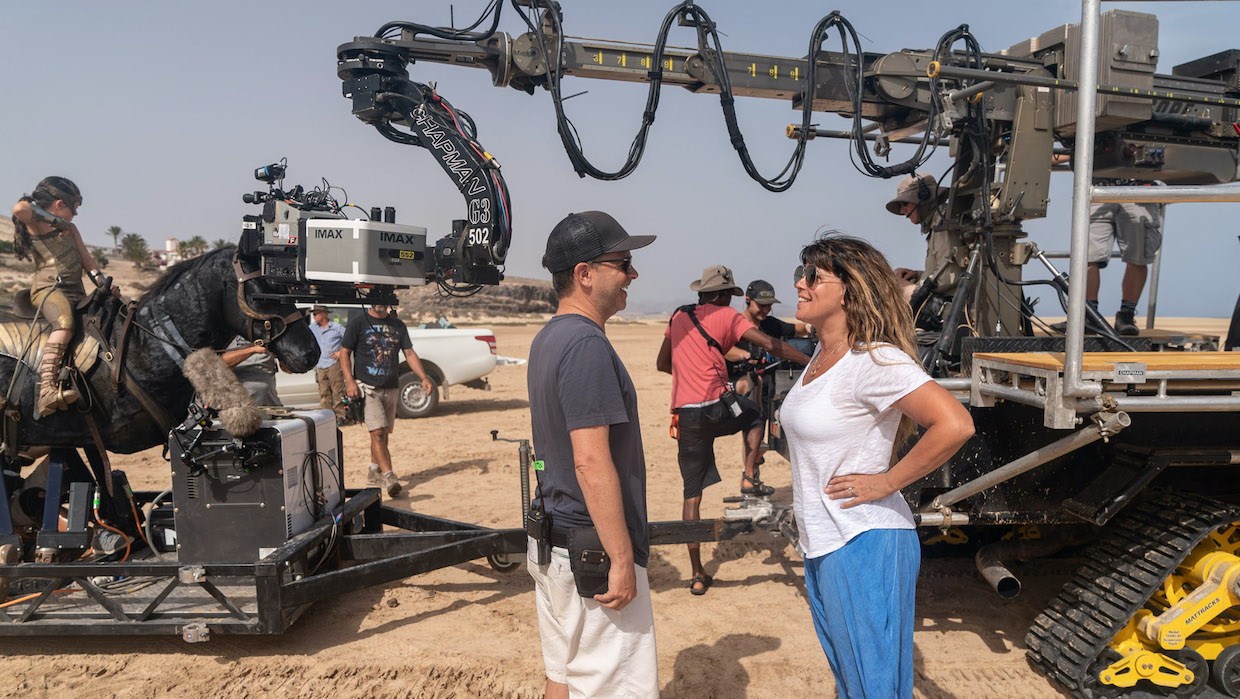 by Matt Mulcahey
in Cinematographers, Columns, Interviews
on Jan 22, 2021

That may seem like an incongruous proclamation from the cinematographer of a $200 million superhero spectacle that concludes with a flying goddess facing off against a half human/half cheetah. But instead of simply shooting the film’s opening Amazon Olympics flashback in a greenscreen wonderland, Jensen headed to Spain’s Canary Islands and put 10-year-old actress Lilly Aspell (as a young Diana Prince) on horseback on an IMAX-rigged process trailer. Instead of digitally returning a gutted Virginia mall to all its 1980s glory, the Wonder Woman team rebuilt more than 60 period stores. And for an epic highway chase set in Cairo, Jensen headed back to Spain so he could squish Gal Gadot behind practical vehicles and flip a rig Dark Knight-style.

With Wonder Woman 1984 in theaters (and still on HBO MAX, at least through Sunday, when it will temporarily depart the streamer), Jensen talked to Filmmaker about crafting the sequel.

Filmmaker: After you shot Wonder Woman 1984, you did a few episodes of The Mandalorian Season 2. How was your experience working with StageCraft and could you see applications for that tool on a movie like Wonder Woman?

Jensen: It is certainly a heck of a lot more fun and gives the cinematographer more control than shooting purely on a bluescreen or greenscreen environment. The way that The Mandalorian is made, StageCraft makes a lot of sense because of the amount of world-building you have to do and the fact that the show takes place on a different planet every episode. So, you need to construct all these environments really quickly. I will say that, while everybody is excited about the technology, it does have limitations as well. I think those limitations will go away as the technology improves and more people start to use it and improve upon it, but still, nothing beats shooting out in the real world and actually doing as much stuff as you can for real.

Filmmaker: You ended up shooting two scenes for Wonder Woman 1984 in IMAX—the first scene and the last. How did you land on those scenes as opposed to something like the highway set piece in Cairo?

Jensen: We did actually discuss doing the Cairo chase scene in IMAX, but the chase ultimately proved to be so technically elaborate and required so many hidden visual effects that we felt that we couldn’t do it justice shooting on IMAX. We needed so many plates and inserts that would be shot later on stage, and needed so many cameras for some of the stunts, that we just didn’t feel comfortable with IMAX, because there are limits in terms of the number of cameras. There are also limits in terms of the speeds that you can use. You really can’t shoot high speed on IMAX without it scratching the film. We shot some things at 48 frames in the Themyscira sequence and were often scratching the film when we were shooting at that speed, so we just decided to stick to 24 frames a second.

What it came down to was, we really wanted to bookend the movie in IMAX—the Amazon Olympics, then the coda scene at Christmas. [Director] Patty Jenkins felt very strongly about opening the movie in a huge scope and we also wanted to shoot as much of it for real as we could with CG enhancements in the background and set extensions. So, we traveled to the Canary Islands to create Themyscira.

Filmmaker: For those IMAX scenes, you switched over to 5-perf 65mm when you had heavy dialogue. What’s the reason for that?

Jensen: Well, primarily because the IMAX cameras are sewing machines—they are so loud. You can’t really record sensitive dialogue with those cameras. I talked to Hoyte van Hoytema, Chris Nolan’s DP, and he sent me an e-mail saying, “Don’t even consider shooting dialogue scenes in IMAX.” So, we were just following the model they set forth in Dunkirk, where anything that was dialogue on that boat they shot in 5-perf 65. The two formats blend together very well.

Filmmaker: Is the film for IMAX just a larger version of the Kodak Vision3 stocks?

Jensen: Yeah, exactly. It’s a 65mm version of those same stocks, the difference being in IMAX it runs through the camera horizontally so you’ve got a 15-perf frame, as opposed to a vertical run through the 5-perf 65mm camera.

Filmmaker: For lenses, what are your choices with IMAX?

Jensen: IMAX has their own proprietary lenses, quite a few of them. We tended to stick to the 50mm and the 80mm, but I think we had eight or nine [focal lengths]. For the 5-perf, we used a Panavision 65mm camera. It was sort of the granddaughter of the same technology that shot Lawrence of Arabia. We also used Panavision’s 65mm large format Sphero lenses, which are gorgeous.

Filmmaker: Like the first movie, most of the sequel is shot on 35mm and you used the Panavision Primos again for that. I’ve been rewatching a lot of 1990s action movies lately and I see the Primos pop up again and again. What keeps bringing you back to those lenses?

Jensen: Well, they’re sharp without being overly sharp. I think a lot of today’s lenses, if they’re not detuned or branded as vintage lenses, are so razor sharp that I find them a little off-putting. There’s a nice roundness to the image with the Primos and in the highlights they have just the faintest amount of glow to them, but they don’t flare easily. They’re just really well-designed lenses and have good color saturation, but they’re not overly saturated. They’re basically what I think of when I think of a “film look” and that’s probably informed by all of the movies I saw in the 80s and 90s shot on Primo lenses. 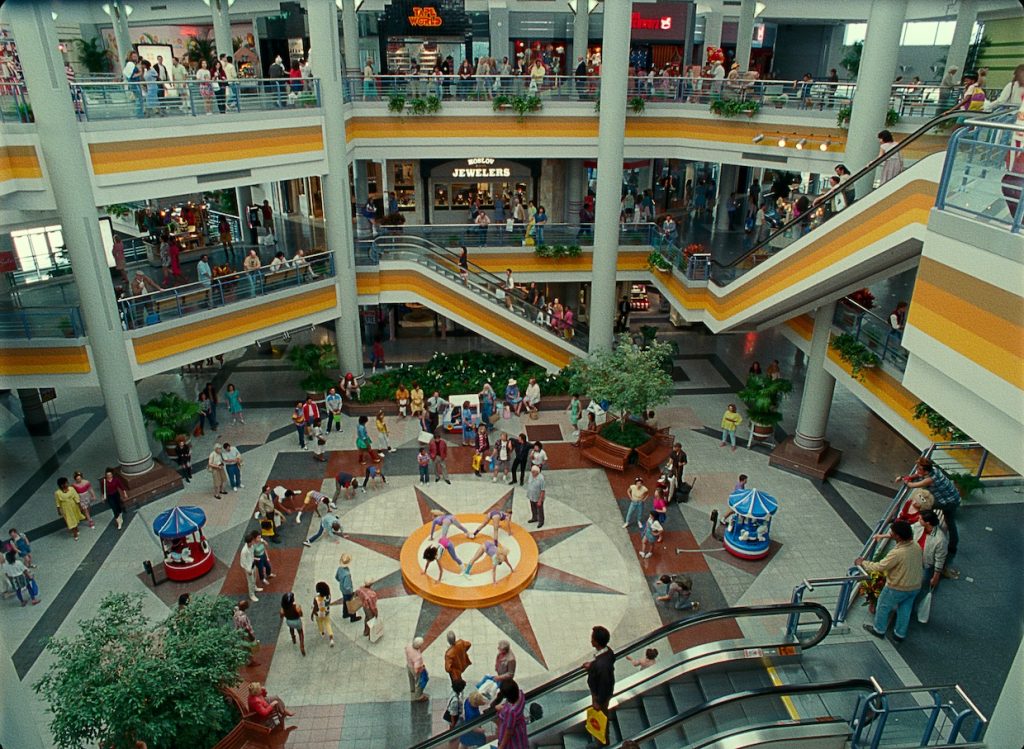 Jensen: I didn’t know about that mall growing up. I went to another mall that was much darker and danker. (laughs) I did help the art department recreate some of the stores I remember going to when I was a kid—that was a blast. They brought back 62 period stores on three levels. The mall was completely gutted, so we had to go back in there and rehab it, not only from an art department standpoint but also from an electric standpoint. Both my electric and grip teams and the art department did such an amazing job bringing that mall to life.

The mall did have these concentric windows that wrapped around the entire food court and atrium. I had to silk all of those windows in order to control the light. I put up half a mile of truss and a quarter mile of diffusion just to be able to do that. It was quite an undertaking.

Filmmaker: When Steve [played by Chris Pine] returns in the sequel, he has taken over someone else’s body [played by Kristoffer Polaha]. There’s a great reveal where the camera circles around Diana and at first we see Polaha, but as the camera moves he’s replaced by Pine. Please tell me you did that just by having one duck out of frame and the other pop in when they were off-camera.

Jensen: Yes, we did. It was so low-tech. Patty had conceived this as a 360-degree shot. It was written into the script. Of course, you can write that, but actually executing it is another thing. Lighting the actors and making them look good was quite a trick. We were in a practical location—and a sensitive location—so I couldn’t build a rig to really light them as I wanted to. The art department built this amazing bulb sculpture in the background. I had seen a reference photo of something similar and thrown that to them. They liked the idea and built it, which was great because it gave me not only some ambience in the room but some nice highlights. I had a really hard time getting light into the actors’ eyes. I eventually set up lights on both sides of them and faded them up and down depending on where the camera was. I was taking a cue from Michael Chapman’s work on Raging Bull, where every time you go from one side of the ring to the other the light is changing and you don’t really notice it. Then I had the visual effects guys paint out the light stands, because they were right there in the frame.

It’s all coordinated so that the switch happens while the camera is on Gal’s face. Gal laughs very easily. So every time one Kris would step out and the other Chris would step in, her eyeline would shift and she would start laughing. She is so good in that scene, but it always makes me laugh to think about her suppressing her laughter to hit this dramatic moment.

Filmmaker: Is it Steadicam?

Jensen: No, it’s actually a dolly on dance floor. If you notice, the camera gets closer at times and winds back out so we needed the freedom. We couldn’t be locked into a dolly on track.

Filmmaker: Let’s circle back and finish with that Cairo chase sequence. There are some amazing practical stunts in there.

Jensen: I’m really proud of that sequence. It was a great collaboration between 1st unit and 2nd unit. Tim Wooster, who worked with me on the first movie, shot 2nd unit and Dan Bradley directed it. They did an amazing job. They did most of the big car stunts and the wire work. They had all sorts of elaborate rigs to achieve a lot of those shots, things like Diana getting dragged behind the back of a truck.

That was shot in Fuerteventura in the Canary Islands. I think the 2nd unit part of the chase was 15 days of shooting, then the 1st unit would come in and shoot little bits of it, particularly with Chris and Gal. The main thing we wanted to do was shoot in the real sun, so 1st and 2nd unit were very close to one another—we would be shooting under similar conditions and I think that helped the sequence blend together. So, while 2nd unit was shooting, we were also working in a parking lot not too far away getting close-ups, things like Gal getting squeezed between two trucks. There’s a top-down shot of her between the trucks—it’s really her and those are real trucks. We shot that in the parking lot. The pavement moving [below Gal’s feet] is a digital effect and [one of the trucks attempting to crush her] is a mechanical truck with a hydraulic arm pushing towards her.

For the shot where the truck flips [and Gal flies through the air)], 2nd Unit did the actual car flip at 48 frames per second. It was a spectacular stunt. Diana is a digital double, then we shot some close-ups of Gal falling on bluescreen later. That chase was a sequence we were shooting little bits of all the way through our 123-day schedule. Literally on the last days of shooting, we were still doing inserts of Gal pushing trucks and recreating daylight on stage, which is not the easiest thing to do. That sequence so reminded me of one of my favorite movies as a kid, Raiders of the Lost Ark, and the desert truck chase. It was so fun to get to do our own version of it.