“Online Dating Operates Through a Skein of Lenses”: DPs Martin DiCicco and Daniel Claridge on Searchers 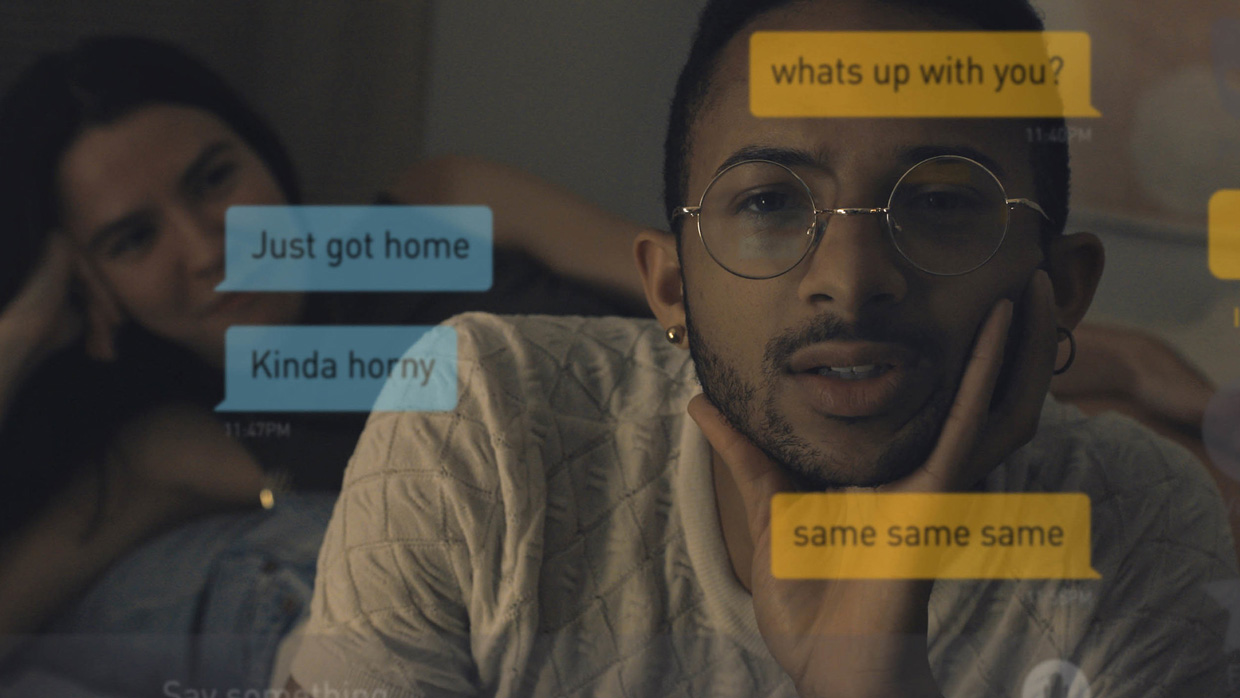 Dating’s complicated arc during the pandemic has been lovingly captured in Pacho Velez’s documentary Searchers. Whether on Grindr, Tinder, or any other app, the question “what are you looking for?” varies from person to person amid the chaos of mid-COVID New York City. DPs Martin DiCicco and Daniel Claridge tell us how they framed Velez as one of the film’s most vital subjects as well as the parallels between film and dating profiles.

DiCicco: I think Pacho and I met at UnionDocs. We were both fans of each other, but we really connected through director Brett Story. I think maybe he liked my work on her film The Hottest August, perhaps seeing a similar, roving practice of filming the absurd in NYC, and our way of personalizing it for Pacho roaming the streets became a sort of skeleton connecting each Searcher. I think he also liked that I’m so used to working alone on my own films, that I am very good with improvisation, being uncomfortable, and carrying gear without complaint or wheels.

Claridge: Pacho and I have now worked together on a few films, all of which have shared a basic formal approach that involves capturing extended portraits of people and places with mostly natural light and an unobtrusive footprint. So we’ve had a chance to rehearse this no-frills collaboration, and I think Pacho felt this project would be well-served by my sense of composition and patience. I also did the overlay animations on the film, and so I was able to think through how those would interact with the subjects, which was useful early on in developing the film’s language.

DiCicco: While we always filmed the details of each person’s space, Pacho wanted to bring an attention to the city as a larger canvas of searching, the spaces all these people inhabit perhaps when they’re not glued to their phones, and the approach to that was to be moving, to make it about searching. Since I often operate with my right eye, it was about keeping that left one open to find the next transition, the next interesting person or detail I’ll jump the lens onto. Pretty soon, however, it is quite obvious that there are two worlds of street life: those on the phones, and those not, so we tried to embrace seamlessly going between the two.

Claridge: On this film, the lens was a kind of two way portal, as it also served as the backplate on which the subjects’ dating profiles were projected (using a teleprompter). There’s an intimacy and distortion inherent to that shared usage, complicated by the fact that subjects are then looking at profile pictures taken by cameras and designed to be viewed through screens. So the visual choices, from the balanced compositions to the wider focal lengths, were all intended to service this sense of refraction, both as a stylistic statement and as a bit of a metaphor for how online dating operates through a skein of lenses and screens.

DiCicco: One thing Pacho had discussed was a desire for uniformity in visual framing so as to mimic the dating profiles people were swiping through, as if we the audience are viewing all the interviewees as potential matches.

Claridge: This was my first use of a teleprompter, so Errol Morris loomed large when experimenting early on with how to compose subjects. And for some of the browsing sessions involving multiple subjects, the decision to stack them rather than square them up was influenced by the logic of fixed cameras (like webcams or selfie shots), where subjects have to compose themselves by leaning into the camera, rather than the other way around.

DiCicco: I’m sure he may demur, but I think there was a considerable debate about how much to show Pacho’s own identity as a Searcher, and for him to step in front of the camera.

Claridge: I think maybe the biggest production challenge was finding a place for the camera where the subjects could comfortably view the dating apps projected on the lens, and then remotely operating the apps smooth enough to serve as an actual browsing session.

DiCicco: Like many documentaries, this was shot on whatever we could get our hands on, and fortunately Pacho had a kit already with the Canon C300 Mark II and Zeiss 28-80mm Compact Zoom. The C300 Mark II has been a stalwart of many docs I’ve shot with over the last few years and giving it a super sharp, nice big barreled zoom to shoot through, it produces very nice, some may call “buttery,” images.

DiCicco: Much of the lighting was improvised based on whatever practicals or “encountered lighting” were available in each person’s home. We had a small kit of LEDs, variously utilizing lamps from LiteMat, LitePanels, and the approach was mostly to supplement their home lighting rather than create something artificial. For the exteriors, we shot all over the city in public spaces, parks, sidewalks, etc., without any permits or crew more than four, which always is difficult when you want to control natural light, but we mostly used overhead silks, bounces and as always on exteriors, negative fill is your friend.

Claridge: I’d just add to Martin’s answer that in a few cases, we added some blue light coming from the edge of the camera to simulate the feeling of being close to a phone or computer screen.

Claridge: Filming Pacho’s first scene was a notable challenge, as we wanted to capture the sense of the filmmaking apparatus in the background, just to reinforce Pacho’s dual role as documentarian and subject. This meant using a large mirror and staging some of the equipment in precise locations without sacrificing Pacho’s ability to read his profile. It was all a bit dizzying to adjust. Other than that, there were perils involved in shooting extended takes in uncontrolled, public spaces. But flexibility and respect for subjects’ patience is always a good game plan!

Claridge: The color grading was really about serving the naturalness of the cinematography, so I think it’s fair to say most of the look was already determined by the choices we made on set. For certain scenes, however, the animations necessitated a slightly different approach, and so there was some occasional DI intervention—an artificial focus pull, zoom adjust, a bit of reframing, some burning and dodging—just to make sure the overlays felt legible and on the correct eye line.