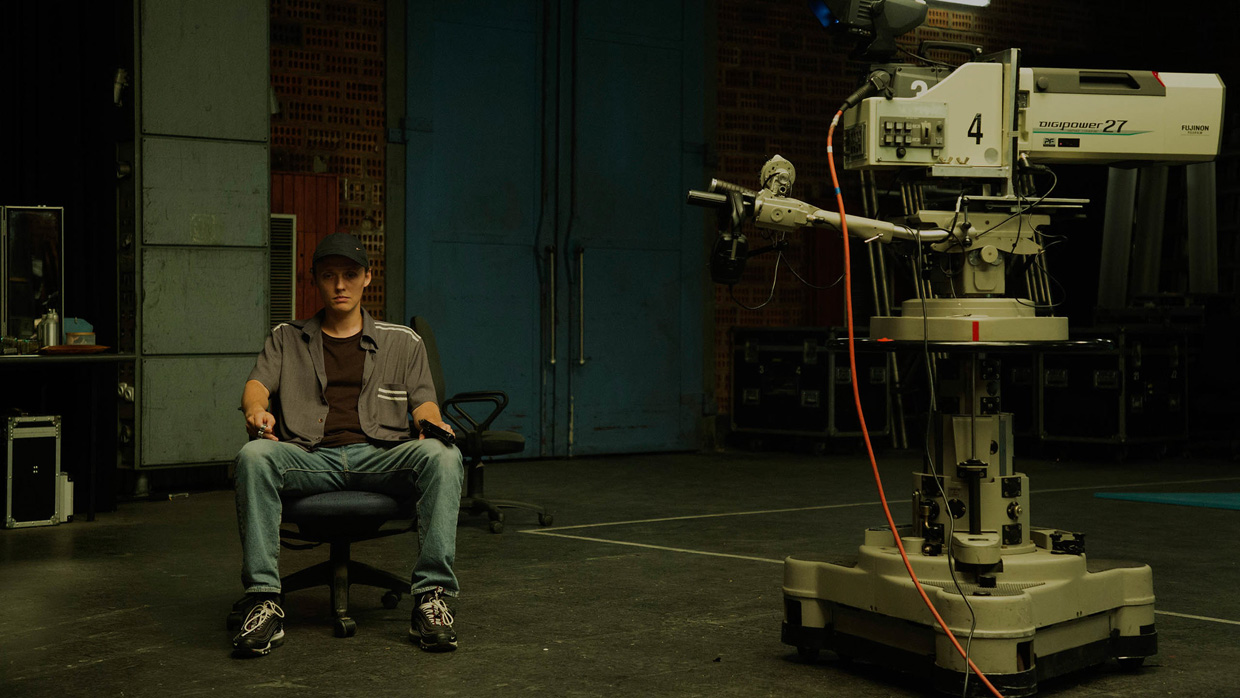 Jakub Piątek’s feature debut Prime Time is a thriller set in the deadly world of broadcast television. In 1999, a youth named Sebastian (Bartosz Bielenia) hijacks a TV studio, taking two hostages along the way. His reasons for doing this slowly unravel, including to himself. DP Michał Łuka tells us how they captured the youthful rebelliousness of the ’90s in shooting.

Łuka: I think every time it’s a whole spectrum of both professional and human factors.  I got a phone call from Kuba saying that he was doing a movie and would like to send me the script. Then we met a few times, discussed the story, shared some ideas and this is how it’s started. Both me and Kuba have documentary backgrounds so I guess that might have some impact. I believe that in the end the most important is the chemistry between people and in a director-DP relation it works the same way.

Łuka: In my work as a cinematographer the artistic goal is always the same, which is to create a visual language that suits best the story. Prime Time takes place in a TV studio on a final day of 1999, when a young man intruded with a gun, took two hostages and demanded to go live with his message. There are two main perspectives from which we tell this story. There is a TV studio where the hostages with the intruder are and the control room full of police and negotiators. In the TV studio we decided to go handheld, so the camera is very close to the characters, follows their emotions and responds as it was a hostage itself. Control room is something completely opposite. The camera is on a dolly and follow the action with its own rhythm, but it doesn’t take part in it. In this way we wanted to divide those two worlds and show the difference between them. For me it’s also a conflict of ideas—youth, spontaneity, honesty against procedures, calculation and conformism.

Łuka: When I was doing my research and going through photography from the 90s, I found a very interesting young photographer from that time, Davide Sorrenti. In his work I found great energy, spontaneity and rebelliousness. Many of his pictures are underexposed and out of focus, but it doesn’t matter! The emotions of the moment are there, captured in the frame with passion and honesty. I felt that Sebastian, the main character of the movie, is somehow close to Davide, so I tried to portray him with this kind of energy.

Łuka: We’ve tested a few cameras and many spherical lenses but finally we decided that Arri ALEXA with Panavision Primo provides the image we wanted.

We didn’t want anything too vintage nor too modern. I knew we would have many light sources in frame as we were shooting in a TV studio so when choosing lenses I tried to find the balance between subtle halation and nice contrast. I think that Primo are very pleasant for human skin and keep contrast that I like. We also did use zoom in some parts of the film and Primo zoom 19-90 is matching very nice with Primo primes.

Łuka: The idea was to stick quite close to reality. That means I was more into naturalistic light and tried to avoid everything that might be too fancy and distract audience from the story. In the TV studio the camera was working handheld, following characters in a rather documentary style so we wanted to create environment where lightening won’t be a limitation and we will be able to shoot 360 degrees if needed.

Łuka: I think that quite challenging was a scene when Sebastian talks with his father. It is a very emotional scene however actors couldn’t see each other. Sebastian was in the TV studio and his father talked with him from the control room via intercom, watching his son on a monitor. The difficulties were caused by logistic of realization rather than technical issue per se. We were shooting this scene using two cameras in two different places not to mention four betacam cameras in the tv studio that were running all the time and captured the image as well. I was operating Camera A in the TV studio, while my friend and great cinematographer Filip Drożdż, was operating Camera B in the control room. We discussed the scene, did a few variants that I planned before but because Filip is very experienced in documentary filmmaking, I trusted his instinct and gave him free hand which turned out very well. We didn’t have that much time to watch and discussed every take that we did but I felt very secure knowing that Filip is there.

Łuka: I always try to do as much as I can in a camera. We did a lot of tests in pre-production to find specific colors. Sometimes it was one gel, sometimes a combination of gels. We looked at the results very carefully with colorist Wiktor Sasim and based on that we created a LUT. During pre-light, Wiktor visited me on the set to make sure that what we did before is still working as we assumed. I didn’t have a DIT on set so this double check was important for me.

In the DI we mainly focus on adjusting contrast more precisely. Wiktor is a very experienced colorist, he doesn’t create endless nodes. Instead of that, he likes to finetune image by working in raw settings. Its more organic this way and I would say it is rather polishing the look that was created in a camera.