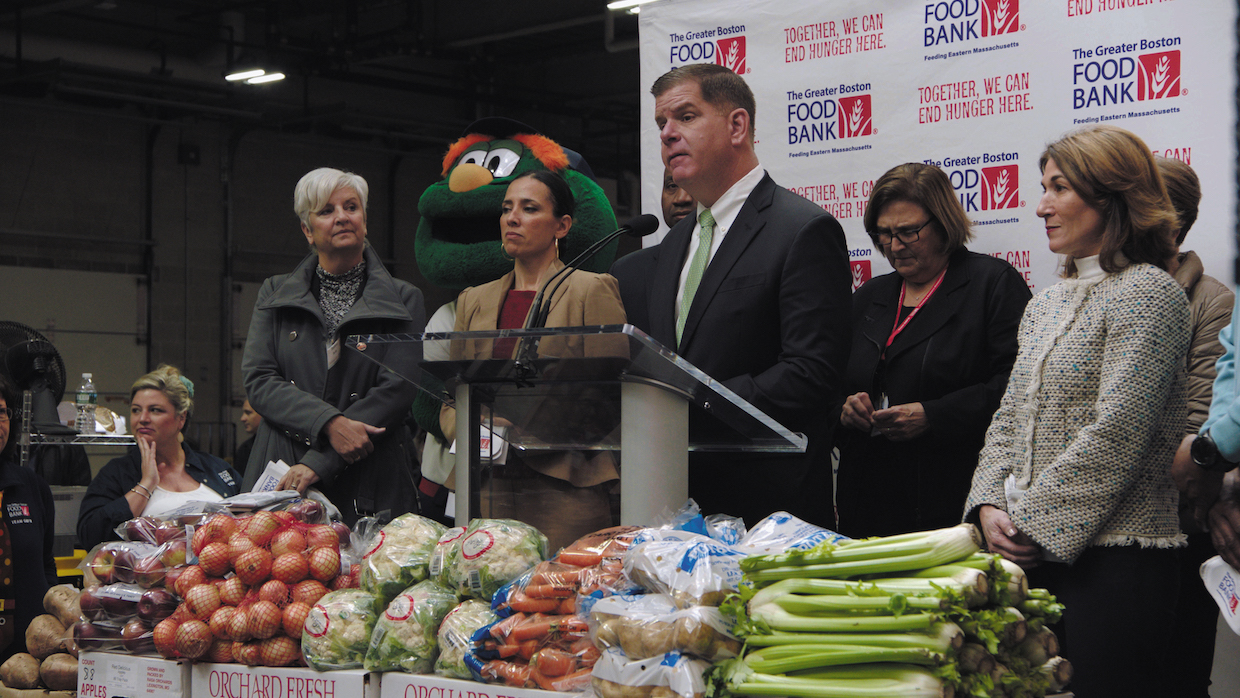 If you live outside New England, and if you saw the movie, Frederick Wiseman’s City Hall (2020) was probably your introduction to Boston Mayor Marty Walsh, recently nominated to serve as Secretary of Labor in the Biden administration. And it’s a sustained introduction at that. Onscreen for about 45 of the film’s 272 minutes, Walsh is the living center of City Hall’s structure. Wiseman returns to his prepared remarks and public appearances like a buffer between less formal scenes of office talk and offsite labor, framing the mayor kind of like the loudspeaker in M*A*S*H (1970)—that is, if it had more dialogue than anybody else and leaned more left than right.

Consider it a preview of what will probably happen if Walsh is confirmed to head the Department of Labor—policies that lean more left than right. Widely expected to revert to Obama/Biden-era guidance on matters like worker safety protections, gender-based wage gaps and employee leave practices, Walsh would begin erasing many of the same inequalities he endeavored to eradicate in his own city—an overarching mission he sums up during an ornate assembly depicted in City Hall. “We’ll keep leading the fight to defend immigrants, we’ll continue our groundbreaking work to achieve gender equality, and we’ll never stop protecting the rights and embracing the identities of our LGBTQ community,” Walsh says at the end of the movie that will likely help mythologize his seven-year run as mayor. His conclusion seems to anticipate his promotion: “Our city needs us, our country needs us, and we’re just getting started.”

City Hall bears at least a couple distinctive qualities, even when considered alongside the larger Frederick Wiseman catalog. One is that Walsh resembles a main character, joining a handful of Wiseman protagonists. Another is that City Hall eventually reveals itself to be the rare Wiseman film where authority figures are depicted without much implicit critique. And while nobody seems to think the film had anything to do with the appointment (Biden and Walsh go way back), much less that Wiseman set out to do Walsh’s career any favors (he’s got bigger fish), City Hall’s release and the cabinet nomination still arrived in such close succession that a little bit of causation couldn’t help but get correlated anyway—at least enough that when Walsh’s name first was mentioned for the position, Louis Menand published an essay in The New Yorker considering the connection under a headline that read, “What Good Government Looks Like.”

That’s significant for Walsh if not for the movie itself, because if you had googled something like “Marty Walsh film” before the release of City Hall, the headlines you would’ve found are not “What Good Government Looks Like.” Indeed, probably the biggest scandal of the entire Walsh administration involved two overlapping cases of alleged malfeasance, each regarding entertainment industry productions. (Both incidents have resurfaced in the conservative press, for obvious reasons. The same week I wrote this article, Fox News ran the headline “Biden labor secretary nominee once linked to federal probe of union strong-arm tactics.”) The first case saw four teamsters charged with conspiracy and extortion for interfering with the 2014 nonunion production of the program Top Chef: Boston: slashing tires, “yell[ing] profanities and racial and homophobic slurs at the crew and others” and threatening host Padma Lakshmi, who testified in federal court that one man rested his arm on her car window and said, “What a shame about that pretty face.” Though all four were acquitted just one week later, the charges had lasting ramifications for productions in the state and for another scandal even closer to Walsh’s mayoralty.

The second case saw the indictment of Walsh aides Kenneth Brissette and Timothy Sullivan on charges of conspiracy and extortion for allegedly having pressured Crash Line Productions to employ union stagehands at the Boston Calling music festival, also in 2014. They were alleged to have done so not for personal gain, but more in the service of a supposed unspoken policy—which became a problem for the prosecutors because that’s not quite extortion by the usual definition. Both aides were found guilty in 2019 after a trial where the Top Chef incident had been admitted as relevant evidence. Those convictions then were overturned in 2020 by a judge whose deciding opinion stated that without a direct quid pro quo there never should have been a case to begin with, and also that “the ’Top Chef’ evidence… caused substantial unfair prejudice to both defendants.” Yet the damage was done, at least in the media, where the Walsh administration’s reputation for brutishly advocating on behalf of union workers was further cemented.

A former labor head from a noted family of union men, Walsh could be mistaken for just “another in a long line of white Irish Catholic guys from Dorchester.” So said a 2013 blog post by his longtime supporter Joyce Linehan, whose CV includes work as a concert promoter, band manager, talent scout for Sub Pop Records, writer, record label owner and PR rep—much of it before she began to closely engage in local politics around 2000, a few years after Walsh had won his first election to the House. In that same post on Linehan’s “Ashmont’s Blog,” she explains why she believes Walsh amounts to far more than that stereotype. “Marty and I share core values: Equality, access, transparency and social justice,” she wrote. Shortly afterward, Walsh won his first mayoral election. And shortly after that, Linehan very unexpectedly took a position as his chief of policy at city hall—a loosely defined role that she’s held to date and that seems to fit the mayor’s description of her in a Boston magazine interview as “senior adviser, and sometimes a conscience.”

Linehan was the force at city hall that got City Hall made in the first place. She recognized the filmmaker’s name in a letter included with the “weird” pile of the mayor’s mail and, as she told The New York Times, “convinced Walsh, and a highly skeptical media-relations team, that they should grant Wiseman the access he wanted.” During an interview that accompanies City Hall on some virtual cinema platforms, Walsh admits that his first reaction was, are we going to look good? To which Linehan surely responded that with Frederick Wiseman, you can never really know. But she also probably explained, or at least found out, that Wiseman’s oft-reported all-access requirement is not quite ironclad. For instance, during the same interview, Wiseman notes that he was not allowed to film “some meetings having to do with political issues” and that he took no issue with that limitation.

Perhaps City Hall would be a different movie without that limitation, or perhaps all those scenes wouldn’t even have made the edit. Speculating is for suckers. What’s relevant is that without any scenes of “political issues” or policymaking, City Hall becomes a record of a more particular dynamic: cutting back and forth between civil servants and city laborers at work on existing projects and policies on the one side, and then Walsh, the movie’s human throughline, making appearances to connect with constituents and communicate that work on the other. For Linehan, a self-described “[Wiseman] fan since I was a teenager,” that was faith redeemed. The chief of policy, senior advisor and sometimes conscience—who also features in the film, leading a meeting that begins around minute 74—recently told the Dorchester Reporter that City Hall “ended up being everything that I could have hoped for in that it illustrates really beautifully the dignity and nobility of public service.”

Certainly, that was the dominant reading of the film, not just among its participants but also among critics and other commentators. That may be because City Hall’s one-sided communication structure makes it so you hear the Walsh administration’s messaging loud and clear, with any potential opposition mostly absent. There are only two or three scenes where you hear citizens responding in any way, making City Hall the flip side to Wiseman’s 2015 film In Jackson Heights, which depicted loosely affiliated groups of citizens resisting policies imposed on them by a mostly offscreen city government. Monrovia, Indiana (2018) is the bad cop to City Hall’s good. The former is a withering comedy about ineffectual Trump country governing that concludes with a dour funeral, while the latter is a portrait of a politician Wiseman described as “represent[ing] the opposite” of Donald Trump that concludes with an ostensibly rousing speech. In this latest film, however, it’s the citizen opposition that mostly goes unseen, so City Hall depicts the Walsh administration’s performance of how they’d like to be viewed: as defenders of “equality, access, transparency and social justice,” as workers who represent “the dignity and nobility of public service” and as people who show you “What Good Government Looks Like.”

This isn’t necessarily a critique of the movie, just a reading of it. It should go without saying that what you’re seeing of Marty Walsh in City Hall is a performance, but it’s not for Wiseman; it’s the same one he puts on month to month and year to year as an elected official. When he’s seen in the movie, he’s always speaking to a public gathering or a large private group and delivering remarks that—even at their most personal, even at their most vulnerable and even at their most sincere—are either reflective of his position as the city’s mayor or reflective of his position as a politician who might someday want to hold an even higher office. Fans of Wiseman well aware of his M.O. might cynically say that Boston City Hall seems to have carefully shown the filmmaker a succession of self-flattering scenes prejudged to be fit for mass viewing. Whether or not the mayor comes off as inauthentic or artificial during his big public events proves to be even more pressing than whatever’s happening backstage, and the nature of those performances becomes the real center of the film. Walsh isn’t acting for the camera, but for the city, for the state and for the country, and it would’ve been happening anyway.

And so, the film’s recurring subject is not uncensored governance but the practiced communication of policies already established and smoothed out beforehand. Its lead character is not the Marty Walsh who exists behind closed doors, nor the Marty Walsh reported on in the midst of scandals, but a Marty Walsh who filmmakers and reviewers might identify as the “anti-Trump,” who reflects a tender conscience more than a brutish capitalism. He’s genuinely Capraesque. Both in the film and now beyond it, Mr. Walsh Goes to Washington.