“The Only Similarity Between My Film and Brecht’s Play Lies in the Title”: Sabrina Zhao on The Good Woman of Sichuan 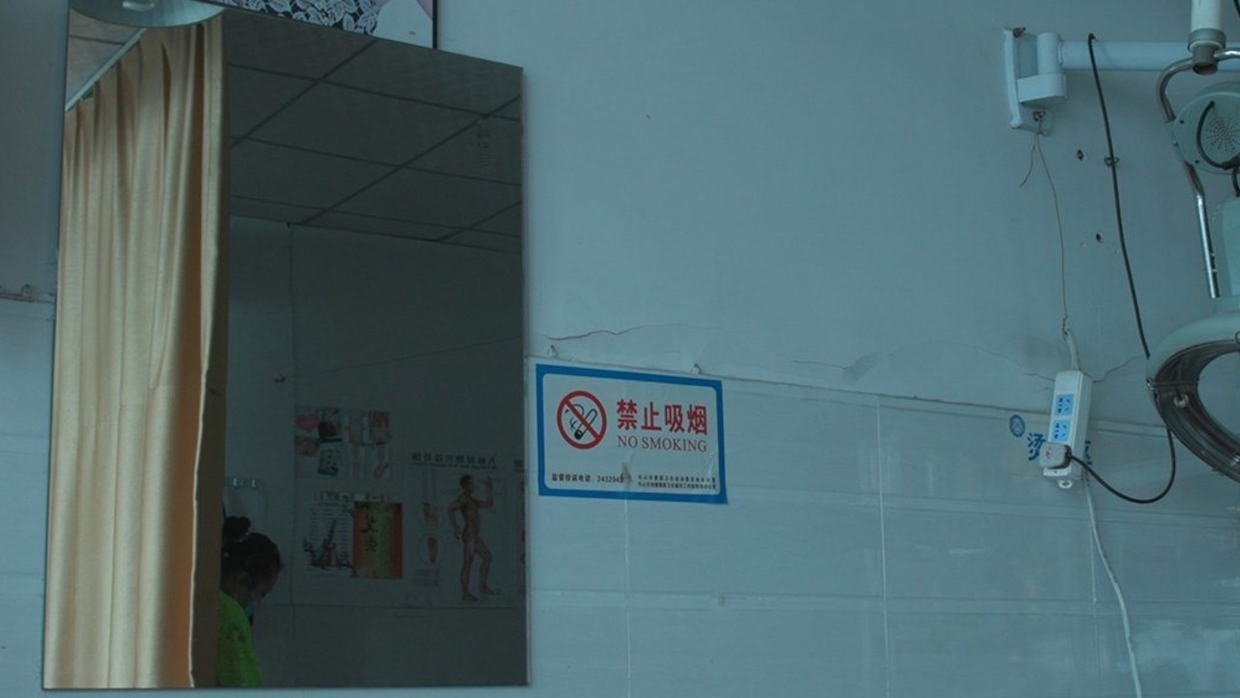 The Good Woman of Sichuan

by Ren Scateni
in Directors, Festivals & Events, Interviews
on Mar 26, 2021

“This is neither an adaptation nor a work of fiction,” an intertitle informs the viewers after five minutes of uninterrupted observation of the rural landscape through the window of a passing train. “Only the quoted lines from The Good Person of Szechwan are supposed to be fictitious.” Sabrina Zhao’s directorial debut The Good Woman of Sichuan is upfront when it comes to disclosing its hybrid nature—between documentary and fiction, the film borrows the little plot there is from Bertolt Brecht’s play The Good Person of Szechwan. Or does it really?

After the first disorienting encounter with the film’s seemingly disjointed scenes, we find out that an actress who plays Shen Te in a new adaptation of Brecht’s play has arrived in Leshan, where Zhao’s film is set. Is she the same woman whom we met earlier at a hairdresser salon? Is Zhao’s The Good Woman of Sichuan the project she’s involved with? Tellingly, there’s no answer to these questions. Throughout the film, we observe unadorned corners of the city of Leshan—the riverbank, dimly lit stairwells, benches in what might be a station, a playground—while the fleeting figures of two women occasionally enter the frame. The Good Woman of Sichuan actively urges us to stop being concerned with linear storytelling; similarly, it encourages the viewer to let their imagination roam free while perusing the film’s locations and picking up sparse fragments of conversation.

The Good Woman of Sichuan’s evocative 4:3 frames, unsynchronized VoiceOver and consistent predilection for static long takes all testify to the film’s experimentalism. Zhao’s playful approach to images and sound opens up to unexpected compositions of simple beauty, while a subplot about a lost black hat, unfolded through subtitles, once again questions the film’s liminal position between documentary and fiction.

Filmmaker: The Good Woman of Sichuan is your first feature film. How did you get inspired to work on this project?

Zhao: It started two years ago, when I wrote a short story about a widowed woman returning to her late husband’s village and somehow drowns there. I still don’t know why I wanted to write that story—there’s something mysterious about it. Later in 2018, I decided to turn the short story into a screenplay, but that didn’t work. I enjoyed the writing process but eventually felt trapped by the screenplay’s framework. In 2019, I moved to Canada to study fine art at York University and soon became interested in documentary. That was when I decided to pick up this idea once again and develop it to explore the relationship between the woman and the town she roams around in.

Filmmaker: Did you write a screenplay this time?

Zhao: No. And I didn’t use the screenplay I wrote years ago either. However, I had plenty of ideas about how I would like to shoot my film, so I wrote down sounds, images or an entire scene. It was like writing a diary, each entry being independent of the others. I also drafted a novella, which is more coherent but not a direct transcript of the film.

Filmmaker: Right from the very beginning of The Good Woman of Sichuan you clarify that the film is not an adaptation of Brecht’s The Good Person of Szechwan. However, the play seems to be a recurring presence within the film. What is the relationship between them?

Zhao: To me, the only similarity between my film and Brecht’s play lies in the title. Undeniably though, the play was my starting point. As I mentioned, I didn’t have a screenplay to guide my work while shooting, so I carried Brecht’s text around. It was my dowsing rod and helped me to feel grounded. At the same time, I was well aware that Brecht’s text is set in an imaginary city and was written by someone who lived far away from China. Even so, I felt somehow connected to it. That’s why I wanted my film to dialogue with the play as much as I wanted it to reflect that sense of alienation that so often transpires from Brecht’s theater.

Filmmaker: An intriguing aspect of your film is its singular visual style. What immediately strikes the eye is the 4:3 aspect ratio. Did you plan on adopting it earlier on? I’m also interested in hearing about the use of motionless long takes which compose the film. I find them quite hypnotic.

Zhao: Prior to The Good Woman of Sichuan, I made a short film called Nini, What Time is it There? (2020), in which I used the same 4:3 aspect ratio and got attached to it. I also think that this aspect ratio gives the film a kind of archaic look, which is very fitting and contrasts with the contemporary footage I shot. There’s a sense of crossing time that felt alluring to me.

Regarding the static shots, it’s how I like to go about. I think there should always be a motivation to move the camera, and I often simply don’t feel it. When I was location scouting together with my cinematographer Sherry Wu, I realised that even if you pass by a certain place every day, there are many things you don’t notice at first. It requires time and effort to get to know a place deeply and to acquire new perspectives. I don’t know of any other way I could work, so I guess mine is just a natural response.

Filmmaker: Now I’m curious to know why you eventually broke away from this form. It’s quite sudden but roughly an hour in, we witness the one and only camera movement in your film.

Zhao: As I mentioned, I had no screenplay, so we improvised a lot. In this case, the scene shows the actress in her flat while she rehearses her lines. I guess my cinematographer wanted to capture the action and responded naturally to it. It was an unconscious choice. Contrarily, in any other scene, we were experiencing the environment so the camera stayed still.

Filmmaker: While watching the film, I often had the feeling I was discovering Leshan through the eyes of the actress who is visiting and, to a certain degree, through yours as well. What is your relationship with the city? And how did you choose the film’s locations?

Zhao: Leshan isn’t my hometown. I come from Chengdu, the capital of the Sichuan province. When deciding where I should set my film, I knew I wanted to go somewhere I haven’t been to before, where I didn’t have any connection. Leshan is quite close to Chengdu. It’s a small town and both the people and the food are great. That made my one-month sojourn really pleasant.

During my time there, I mostly walked around the city with actress He Weihang and my cinematographer. Depending on the weather, the three of us planned the day ahead the very morning, then headed out to a location we visited the day or a few days before. Sometimes it was a hairdresser salon, some other times the riverside. What you see in the film is only a fraction of the footage we shot in each location. My priority was to bring out the rhythm of the places we visited—that’s how I decided what to keep and what I should edit out of the final version.

Filmmaker: There are moments in the film in which a dissonance occurs between images and dialogue. Not only do we hear the voiceover and no one appears on-screen, but there are also instances when no one speaks and yet we read words on-screen. Can you talk about it?

Zhao: When I first recorded the dialogue I didn’t know how I would use it later on. I could film a scene and have the characters onscreen talking to each other. But in the editing process, I realised that the synchronized sound and images didn’t work for me. I’m fascinated by words and think that as simple an act as decontextualizing allows for more leaps of imagination. That’s why I decided to break the dialogue apart and disseminate its parts throughout the film. As for when you hear no voice and just read the subtitles, that’s something else I came up with during the editing process. I strongly felt that there was another voice I wanted to add to the film but couldn’t figure out whose voice was that. It simply didn’t belong to any of the film’s characters.

Filmmaker: In the intertitle that appears at the beginning of the film we read that “any resemblance to the imagined or dreamt is entirely coincidental.” Throughout the film we see people sleeping a few times and discussing dreams. How come sleep seems to be so important in the film?

Zhao: Realistically speaking, during our lives we sleep for a lot of time. And, obviously, we slept a lot while being in Leshan. I think of sleep as something non-intrusive, a very simple action. That said, if you think of the film as an active production for which we didn’t follow a screenplay, we filmed everything we could possibly film. It was like we were drifting together and accidentally caught things on film. So the scenes showing people taking a nap weren’t designed. We just happened to have a camera in place recording us sleeping.

Filmmaker: Lastly, I would like to ask you something that is being asked in the film too. What is a fluid feeling?

Zhao: To me, it’s an obscure feeling that eludes classification. It has to do with a transient position, with being in-between states, like when you are in between wakefulness and sleep, for example. It’s hard to define. But I definitely think it’s linked to our connections and how they don’t tie us down but set us free. It’s an elusive feeling, yet it ultimately makes me feel present and connected.