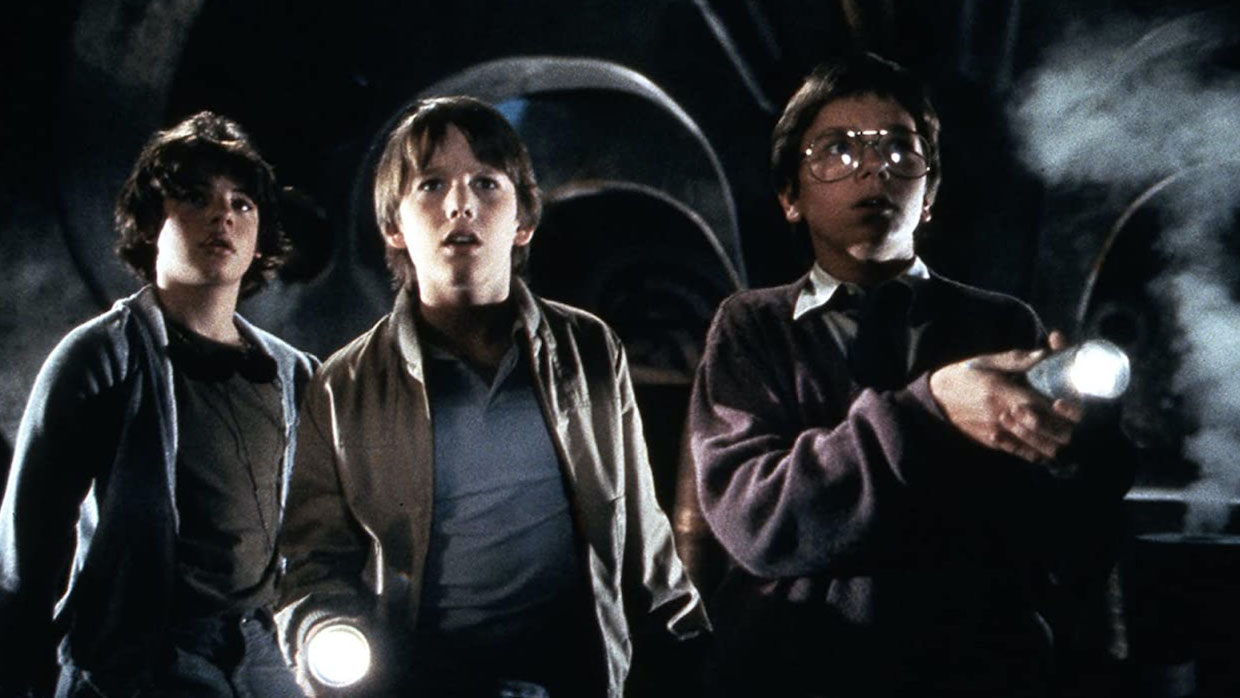 One of director Joe Dante’s most interesting and underrated films gets the Blu-ray treatment it deserves with the Shout Factory release of Explorers, Dante’s 1985 follow-up to Gremlins that walks a similarly unconventional line between Spielbergian sentiment and Tashlinesque pop satire, with an undercurrent of unsettling melancholy thrown in for good measure. There’s genuine warmth and wonder to spare in the first half of the film as friends Ethan Hawke, River Phoenix, and Jason Presson build their own spaceship; when they actually manage to rendezvous with the aliens who have been communicating with them, the movie shifts gears to become a gloriously silly barrage of jokes, sight gags, and media references (as in his earlier work, particularly the “It’s a Good Life” segment of Twilight Zone: The Movie, Dante uses TV and movie clips the way American Graffiti and Mean Streets use pop music), before shifting gears again to become a quiet meditation on the inevitable disappointments of dreams realized. The special effects by Industrial Light & Magic and make-up wizard Rob Bottin are extraordinary (and hold up awfully well over 30 years later), yet for once don’t overwhelm the intimacy of the performances; Dante is that rare director who knows how to dazzle us with spectacle without smothering the actors underneath the pyrotechnics. While there are emotional threads (like an oddly abbreviated love story) and thematic connections that aren’t completely developed or resolved—the result of an accelerated schedule imposed on Dante to hit a summer release date—Explorers is ultimately one of the most enchanting and resonant fantasy films from an era that was filled with them, and a worthy companion to later Dante gems like Matinee and Small Soldiers. (It’s also a nice showcase not only for the kids but also for Dante stalwarts Robert Picardo—here playing multiple roles with comic gusto—and Dick Miller.) Shout’s Blu-ray includes both the theatrical cut and the director’s preferred home video reedit, along with deleted scenes that offer a tantalizing look at more radical alternate versions that might have been. There are also new interviews with director of photography John Hora and editor Tina Hirsch, and a fantastic hour-long documentary on the making of the film that features interviews with Dante, Hawke, writer Eric Luke, author and Explorers superfan Ernest Cline and production executives David Kirkpatrick and Darlene Chan. It’s an indispensable package for Dante enthusiasts and 80s sci-fi aficionados.

After burning his bridges with the Hollywood studio system by publicly deriding the Paramount executives who oversaw Popeye (1980), Robert Altman was cast into the wilderness for a decade before he returned to industry prominence with Vincent and Theo and The Player in the early nineties—or so the mythology goes. In fact, Altman’s years as an outcast yielded a filmography that would be the envy of most directors; thanks to his unique survival instincts, practically the moment his corporate financing dried up he course corrected to make what he could with the resources that he had, initiating a series of modest productions based on stage plays that were low on budgets but high on artistic ambition. One of these, 1984’s Secret Honor (a filmed monologue starring Philip Baker Hall as Richard Nixon), is one of Altman’s best films, and adaptations like Come Back to the Five and Dime, Jimmy Dean, Jimmy Dean (1982) and Streamers (1983) remain fascinating collisions between Altman’s restless zoom lens-based style and the limited prosceniums of the source material. The most compelling movie of the cycle in this regard is Fool for Love (1984), which screenwriter Sam Shepard adapted from his own play—he also, at Altman’s insistence and to Shepard’s later regret, replaced the stage version’s Ed Harris as the male lead. Shepard and Kim Basinger play old lovers who reunite and reveal their secrets at a remote motel where the boundaries between past and present and fantasy and reality are increasingly blurred; as their story unfolds, Altman returns to his dreamy Images/3 Women mode to cast a hypnotic, lyrical spell. The languid style is somewhat at odds with the raw force of Shepard’s dialogue and physical intensity, yet it’s this very incongruity that gives Fool for Love its power and makes it compulsively watchable; of all Altman’s stage adaptations, it’s the one where he seems the least subservient to the material, even though he remains utterly faithful to Shepard’s text. Shephard’s self-criticisms in regard to his own performance are totally unwarranted in this context; Harris might have been the right choice for the immediacy of the stage, but Shephard is pitch perfect for the tone Altman establishes—as are Basinger and costars Harry Dean Stanton and Randy Quaid. This quirky classic is newly available on Blu-ray from Scorpion Releasing in an edition that includes an excellent vintage interview with Altman in which he discusses his process in general and his specific approach to Fool for Love.

“A Terry Gilliam remake of La Jetée starring Bruce Willis and Brad Pitt” might sound like one of the made-up pitches in the opening shot of Altman’s The Player, but in 1995 such a thing was actually produced—and not only that, but it proved to be one of the most interesting studio films in a year packed with them (Casino, Heat, Nixon, Strange Days, etc.). Unlike Altman, Gilliam has always required a large amount of capital to realize his ambitions; it’s difficult to imagine him successfully readjusting to direct minimalist stage adaptations and cable TV films as Altman did when Hollywood became inhospitable for him. Thus, when The Adventures of Baron Munchausen (1988) died at the box office, Gilliam knew he had to regroup and prove himself as a viable commercial auteur if he was to continue making movies on the scale to which he had become accustomed. The first step toward his rehabilitation was the successful The Fisher King in 1991, but the most effective blend of his idiosyncratic sensibility with the requirements of mass appeal entertainment came with that riff on La Jetée, 12 Monkeys. Much as Altman did with The Player—a movie that followed every single one of the commercial “rules” mapped out by its lead studio exec character while simultaneously subverting them—Gilliam delivers exactly what he’s supposed to as a dutiful corporate director but does so in an unabashedly iconoclastic way. Action hero Willis is cast as a somber, largely helpless (and humorless) time traveler while heartthrob Brad Pitt plays an aggressively irritating lunatic, and the sci-fi thriller mechanics of David and Janet Peoples’ script are used as a delivery system for some truly disturbing ideas about chaos and madness and the ease with which the world could end. (The fact that the movie revolves around a killer virus makes it all the more unsettling in the age of COVID.) As sardonic and dystopian as more ostensibly personal Gilliam films like Brazil, 12 Monkeys is also surprisingly affecting—its tragic finale is played straight, without irony and without mercy, resulting in the most emotionally devastating images of Gilliam’s career. Although 12 Monkeys has been available in a variety of supplement-laden pressings going back to the Laserdisc days, its new Blu-ray steelbook incarnation from Arrow is the film’s most essential home video release thanks to both a Gilliam-approved restoration and a collection of outstanding special features, including an insightful appreciation by Gilliam expert Ian Christie.