“Resisting the Power of the White Gaze”: CJ Hunt on his Tribeca-Premiering Confederate Monuments Doc, The Neutral Ground 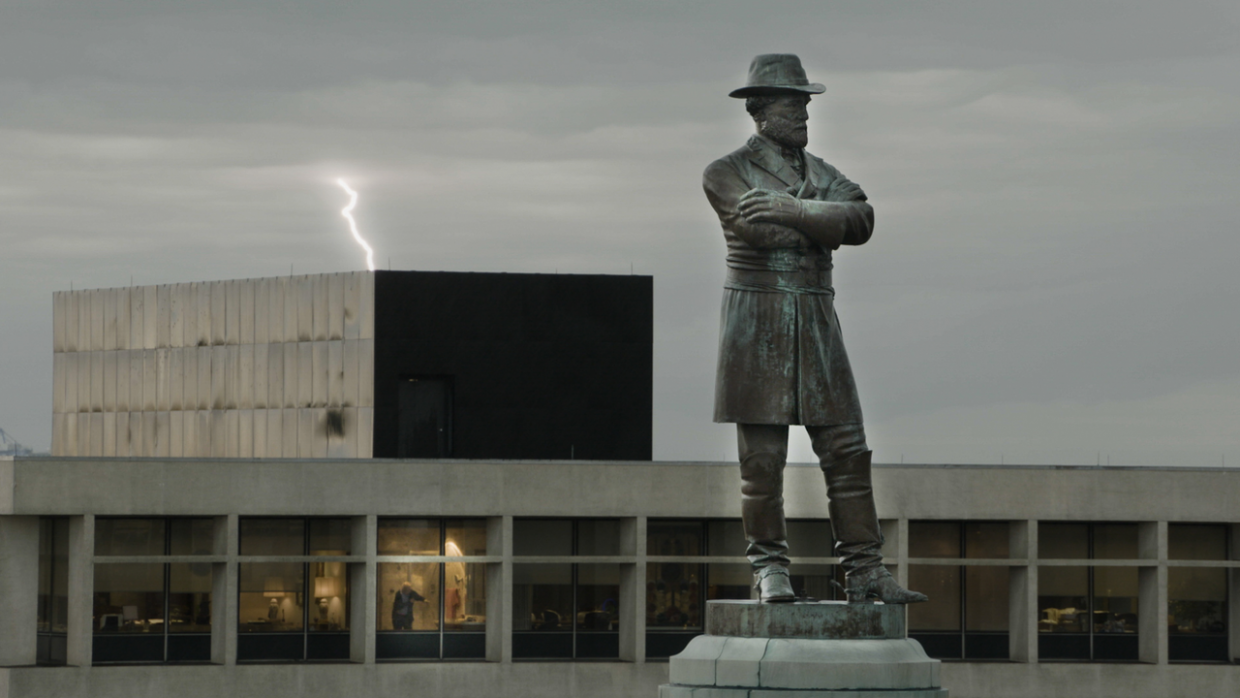 by Lauren Wissot
in Directors, Festivals & Events, Interviews
on Jun 18, 2021

CJ Hunt is a NYC-based comedian and filmmaker, and currently a field producer on The Daily Show with Trevor Noah. But back in 2015 Hunt was still a resident of New Orleans, having spent nearly a decade teaching in its school (and after-school) system, assisting in its public defender’s office — and yes, pursuing his passion for comedy at night. So when Mayor Mitch Landrieu announced he’d be asking the city council to remove four monuments to the losing side in the Civil War, the stand-up/educator immediately thought to call his good friend (producer Darcy McKinnon, a “25 New Face” of 2020), pick up a camera, and record the subsequent government hearings. Not for posterity, per se, but for laughs.

What was originally intended to be a 5-10 minute comedy short pitting racist shenanigans against anti-racist logic (and perhaps even coming up with a compromise – how about if we just take down the general and leave his horse?) turned into a years-long odyssey into the dark heart of Lost Cause mythology. Which culminated in The Neutral Ground, a feature about the “absurd hold the confederacy still has in America,” according to the filmmaker (who aspires to “fall somewhere between Marlon Riggs and Sacha Baron Cohen”). An absurdity so funny it hurts. Or as Hunt himself has wondered, “Does watching a Black senator proclaim “America is not a racist country” make you laugh or cry?”

So to learn all about this strange trip through revisionist history Filmmaker reached out to the African American and Filipino American director the week before the film’s Tribeca debut as part of the fest’s Juneteenth Programming (to be followed by a run at AFI Docs before opening POV’s 34th season on PBS July 5th).

Filmmaker: I read that you began this film thinking you’d make a comedy short about the wacky drama unfolding at city council meetings after Mayor Mitch Landrieu proposed to take down four monuments. But in addition to doing stand-up in New Orleans, you’d also taught in the city’s classrooms and in its after-school programs. So as an educator had you witnessed Lost Cause mythology vis a vis curriculum or your students? Did you see this project at all from the perspective of a potential teaching tool?

Hunt: As a comedian my first instinct isn’t to teach; it’s to roast. To poke fun at the things that don’t make sense, to skewer the things that make me furious. In 2015, the internet’s reverence for “epic takedowns” made me think my job was to land the sharpest joke at the expense of some man waving a flag and explaining that slavery “wasn’t that bad.” But after a year of interviewing historians, I began to realize that a lasting takedown of the confederacy isn’t accomplished by ridiculing a deeply misinformed man. Instead, it’s about shining a light on the decades of propaganda white southerners inserted into textbooks to ensure that man is misinformed.

During my first year of teaching, I remember beginning a social studies unit by asking my fourth graders to write down what they already knew about Martin Luther King. An alarming number of them explained that MLK was “the one who freed the slaves.” For those students – and for the old men waving confederate flags at the base of the statues – the history between the Civil War and the Civil Rights movement is a blank space. Roughly 100 years of missing pages. Lincoln gets shot, and before you know it Rosa is refusing to give up her seat, and MLK is freeing us all with his colorblind dream.

The Neutral Ground is a tool for every teacher trying to fill in that space for their students. My favorite thing about the film is that it doesn’t feel like a “teaching tool.” It’s the kind of gripping, funny, alarming movie that I would have asked my teacher to put on every time we had a substitute teacher. If we get anywhere near as much in-class screening time as The Voyage of the Mimi, I will have arrived as a filmmaker.

Filmmaker: You’ve spoken about how hard it was to shoot this film while also making late-night television – specifically that the forms are inherently different and thus demand different approaches. Can you discuss this a bit more?

Hunt: In late night comedy correspondents have the ability to shield themselves with a character. In order to set up the right joke you are allowed to play someone who is dumber or more impatient than you actually are. So when I put myself in front of the camera on my own film I immediately tried to copy what I’ve seen some of the most brilliant correspondents pull off on TV. When a historian would tell me a harrowing fact I would dig into the slapstick of sinking down into my chair, or abruptly getting up and leaving the interview room. But each time my editor would look at the footage and say, “Yes, it’s funny, but do we believe it? The CJ we know in this film just explained all of Reconstruction to us – so how is he possibly surprised by this fact?”

It turns out that keeping an audience’s trust for 82 minutes requires a level of vulnerability that I was not ready for. Every time my producer Darcy reminded me “the audience just wants to see you be you,” I reacted like you might upon hearing your friend’s dubious startup idea. (“So…I’m just going to ask very serious questions and go scary places and feel messed up inside, and that’s the movie?” “Yes, that’s the movie.”)

Filmmaker: I really related to your statement “Comedy is how I process absurdity,” and that “Confederate monuments embody all of the absurdities about race in America, or rather, the nation’s core racial absurdity: our inability to tell the truth about the past.” Do you ever worry that comedy can only reach those in on the joke, though? Can laughter ever be a force for systemic change?

Hunt: No one likes to be the butt of a joke. Any joke. Whether it’s that your shirt is ugly or that your idea of heritage is actively upholding white supremacy. So if you are someone who fundamentally believes that racism is not real, I know that this film will likely not change your mind.

However, I do think comedy gives us the language we need to have more accurate honest conversations about what is causing us pain. Comedy names the thing that doesn’t feel quite right. It gives us the words. When I’m watching great comedians I will often gasp, “Yes that’s exactly right. You named it.” So while this film may not inspire any Green Book-style changes of heart, I do hope that giving people more language around the absurdity of America’s selective memory — about slavery, the confederacy, our enduring tolerance for white mob violence — helps diverse communities feel like they have sharper words to battle white supremacy at home. (And, honestly, if that doesn’t work, I still plan to open my national chain of Critical Race Theory Preschools. Serious funders, please message me directly.)

Filmmaker: So what have been the reactions from all the participants, especially your dad and The Lost Cause-promoting characters, to the film?

Hunt: I’m still waiting to hear reactions from The Lost Cause-promoting participants. My father loved the film and said he was very proud of me. However, his central critique was that our scenes together at the breakfast table did not properly feature the pancakes he worked so hard to make. I accept this critique. Filmmaking is all about choices. My next film will be all about pancakes.

Filmmaker: What most surprised you, or what big lessons did you learn, during this six-year journey to create The Neutral Ground? Did the process ultimately change you in any way?

Hunt: The biggest lesson I learned was about resisting the power of the white gaze. The Neutral Ground is a historical film about reckoning. In making the film I became obsessed with digging up receipts proving how deeply the confederacy (and the entire nation) invested in white supremacy. I’m proud of the receipts we unearthed, and I think the movie is better for it. But at some point I had to ask myself – honestly, it was my producer Darcy who asked me – who are all these receipts for?

The answer is white people. Certainly not all white people. And definitely not only white people. But the majority of folks who need multiple primary sources to accept the basic fact that the confederacy seceded to protect slavery are generally…not…Black people. The white gaze is that voice that sneaks into our art and proclaims, “Go on boy, prove to me racism is real. Gather the old yellowing documents, fetch the animated graphs, show me the most gruesome photos you can find, and then maybe I will believe you.”

The white gaze is a magnet pulling documentary filmmakers to dedicate our energy and screen time to examining, anticipating, and attempting to change the feelings of those white viewers least likely to believe us. Breaking the pull of that magnet required finding as many moments of Black freedom and intersectional resistance as I could. The lesson is this: when you are making a reckoning film, the scene cannot be about the klansman alone. It must also be about the Black people standing in his way declaring,“I will not live in fear.”