A Colander in the River of the World: On Decolonizing Film Studies 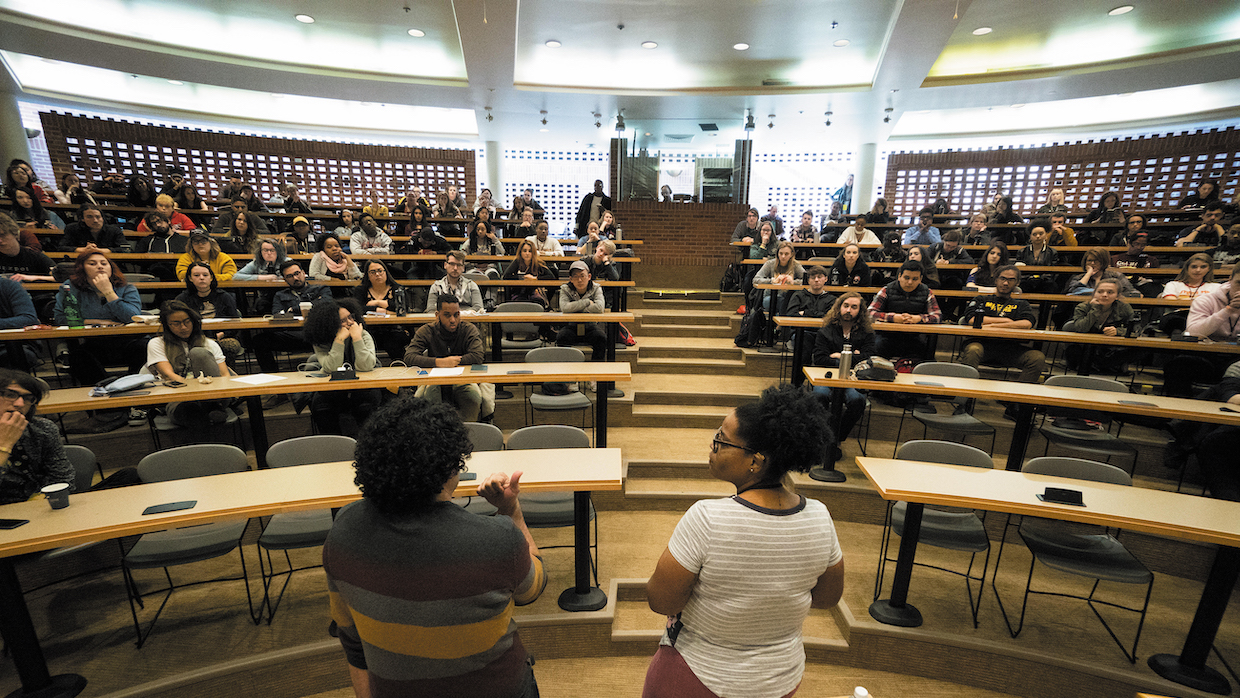 American film studies and production programs are undergoing a major structural overhaul. A long-burgeoning movement comprised of academics and filmmakers are calling for the full decolonization of syllabi and cinematic offerings within these courses, which have historically foregrounded work by straight, white men as the pinnacle of what’s worth studying and emulating. Many academics and scholars hesitate to use the term “decolonize” broadly for fear of rendering it into a tepid buzzword (or worse, deflating the term to a borderline-meaningless liberal t-shirt slogan), yet it’s become an essential framework for many who wish to make meaningful changes within the confines of the ivory tower. “There is definitely harm in repeating the word in a hollow way,” says Keisha Knight, a Ph.D. candidate in film and visual studies at Harvard University. “But I think it’s a useful conversation starter and a way to think about the process of disentangling our ways of thinking from the toxic parts of the systems we have inherited.”

Haiti became the first liberated nation in Latin America, as well as the first independent, Black-led nation to emerge from Western colonial rule back in 1804, but “decolonization” as a term did not see widespread adoption until the 20th century. Particularly from the 1940s onward, the prospect of “decolonizing” literally meant to reclaim national autonomy. Of course, the neocolonial tendrils of imperial rule—commerce, tourism and coup d’états—have not been uprooted. Since then, decolonization has also come to be recognized as a cultural exercise, which is how it largely intersects with the production and analysis of cinema. The work of the late Jamaican-British cultural theorist Stuart Hall—who co-founded the now-defunct Birmingham School of Cultural Studies in 1964—still serves as one of the foundational intellectual pillars in this area. His writing gave credence to the idea that popular culture, namely the sectors of film and television, were actively documenting struggles for power within broader society. “Popular culture is one of the sites where this struggle for and against a culture of the powerful is engaged: It is also the stake to be won or lost in that struggle,” he wrote. “It is the arena of consent and resistance.”

Edwin Martinez, a documentary filmmaker and professor in the film program at his alma mater, SUNY Purchase, believes that recognizing one’s own colonial thoughts and actions comes well before delving into decolonial discourse. “Decolonizing is the second step of changing something in a meaningful way,” he says. “The first step is to actually identify the colonizing action.” In a 2016 article for the International Documentary Association’s magazine, Documentary, Martinez recounted his experience working on location while editing City of Trees, a feature about the D.C. nonprofit Washington Parks & People. While setting up his tripod to grab a seemingly innocuous shot of houses in the majority-Black Southside neighborhood, he and the rest of the crew were confronted by a local woman named Tameka, who argued that their presence was unwanted and unhelpful. This interaction not only led to transforming the eventual narrative of the film, it also allowed Martinez to reckon with the hidden colonial nature ingrained within the documentary form.

“The brutal truth is that the history of documentary filmmaking is rooted explicitly in cultural, racial, gender and class-based colonialism,” he wrote. “For decades upon decades, Western filmmakers—almost exclusively white men—traveled to other countries and cultures to extract resources (footage), which they would exploit (edit) for the benefit of their home culture (theaters, film festivals, PBS).” Over the phone, Martinez pulls no punches: “Documentary film was not built to liberate,” he says, but rather “to capture and exploit the stories of real people for the consumer class.”

By identifying the action on his part that inadvertently perpetuated the imperialist origins of the medium, Martinez has been able to steer his documentary production students away from making these same egregious missteps by focusing his classes on the inversion of traditional power structures. Adopting a collaborative and participatory model, Martinez emphasizes that he does not position himself as an authority figure in the classroom, instead assuming a guiding role.

“We are a colander in the river of the world,” he says of the extra work professors must often perform to provide anti-colonial materials for students. However, the benefit of making these resources more widely available within the university system is a necessary process for enacting real change. “Like [with] any institution, you have to navigate what you want to give to it and what you want to get out of it,” Martinez concludes. However, the burden of directly challenging the established academic canon, in film production and in cinema studies classes, nearly exclusively falls on the shoulders of students and faculty seeking different approaches.

For Joanna Hearne, an associate professor specializing in Native American film studies at the University of Missouri, the prospect of decolonizing any realm of study must first reckon with the fact that this country was founded on Indigenous land. As a result of that, tangible resources need to be directed toward Indigenous filmmakers and creatives in the film industry. “Decoupling the funding of Indigenous media from state control—as well as the profiting and licensing system—would actually give Indigenous people control of those resources without the strings that come attached,” she explains. Decoupling academia from debt would also aid decolonization efforts, argues John Craig Freeman, an artist and full-time professor at Emerson College who accrued very little debt while attending university within the California state school system in the 1980s and ’90s. “Anything that can eliminate student debt as well as ensuring that state institutions are as close to free as possible will make a lot more progress in the decolonization mission,” he asserts. “There’s an inherent paradox in forcing students to go into all this debt just to participate in a system that’s inherently unjust.”

Gatekeeping in academia is also a concern for Hearne, who has emphasized the importance of public screenings of oft-forgotten Indigenous films. One such title is Ramona, a 1928 silent film directed by Chickasaw filmmaker Edwin Carewe and based on the novel by Helen Hunt Jackson. It was thought to be lost, but Hearne was one of the scholars who aided in the film’s restoration before its 2014 premiere at the UCLA Film & Television Archive’s Billy Wilder Theater and subsequent screenings at various American universities. “Those earliest films were built on images of Indigenous people—in fact, Indigenous people are at the center and the beginning of American film history,” says Hearne. “We can re-recognize and refocus that history.” Likewise, Artel Great, assistant professor of critical studies at the San Francisco State University School of Cinema—and the first Black valedictorian of the UCLA School of Theater, Film, and Television—argues that upholding dominant power structures within cinema studies curricula is a deliberate effort to preserve a predominantly white, Eurocentric film canon. “The erasure of the contributions of Black filmmakers and film theorists from the film studies discipline is, ultimately, rooted in the maintenance of ‘whiteness’ as the dominant, seemingly invisible system of power in this country,” he says. “A decolonized curriculum would upset and dismantle this dynamic.” Cristina Kotz Cornejo, the chair of Emerson College’s Visual and Media Arts department (as well as the first Latina to hold a full professorship position in media production in the United States), notes that a knee-jerk reaction to decolonization efforts from white colleagues has indeed been apparent. “It becomes a question of re-educating yourself, and that’s harder for faculty that have been at it for years with a very particular set of ways that they teach,” she says. “Some are embracing it, and some are a little shell-shocked.”

However, Hearne is wary of equating the act of redefining what is considered valuable in the study and pursuit of filmmaking with being inherently decolonial—particularly when these programs continue to exist on colonized soil. “I’d like to avoid using decolonization as a metaphor,” she says, referencing Eve Tuck and K. Wayne Yang’s 2012 paper, “Decolonization Is Not a Metaphor.” Tuck and Yang argue that there is innate harm in using a term cemented in the fight for Indigenous sovereignty to contextualize efforts being made to decentralize Western thought and pedagogy within universities. Despite the importance of integrating topics of decolonization in formal areas of study—which in itself has given rise to wider offerings of Indigenous studies courses—Hearne believes platforming concepts of “kinship and relationality” will in turn lead to “visual sovereignty” for Indigenous filmmakers and portrayals onscreen. For Ellen Chang, a doctoral candidate in Cinema & Media Studies at the University of Washington, “One of the most immediate and easily discernible shifts can be found in the new hires and course offerings, as well as the faculty’s and students’ research interests. The recent attention to media archaeology, rewriting film histories and historiographies, and film sounds, as well as the popularization of videographic criticism as a more accessible form of film analysis and film studies, can all be seen as part of the effort to decolonize cinema studies.”

Yasmina Price, who balances her workload as a Ph.D. student in the departments of African American Studies and Film and Media Studies at Yale University with penning essays that highlight “hidden” histories of Black cinematic contributions, thinks that the prospect of decolonizing academia can appear oxymoronic. “For the most part, I don’t think you can decolonize those institutions any more than you can reform the police,” says Price, though she notes that activist efforts in the 1960s and ’70s that led to the creation of Black Studies programs is the closest academia has “ever gotten to ‘decolonizing’ anything.”

Doubting that institutions rooted in a history of genocide and imperialism are capable of changing is valid. Perhaps this is why some of the most forward-looking programs that discuss decolonization within the spheres of film production and theory are operating outside of the university system. One such effort is the recently launched first edition of Film Futura, a self-described film school alternative that promotes “a decolonizing approach to the PAST, PRESENT, and FUTURE of film history, practice, and radical cinematic possibilities.” Equipped with a tentative syllabus alongside a variety of esteemed educators and panelists whose work spans academic and cinematic disciplines (Knight and Price among them), Film Futura drew more than 250 applications from prospective students ranging from “novice teenagers to 40-something Ph.D. holders,” to apply for a spot in the 85-seat, six-week summer program. “After reading through the Film Futura applications, it was obvious that folks who went to film school didn’t get the experience they anticipated,” says co-creator Ruun Nuur. The work in this mission to “decolonize” must come not only from those who seek to educate, but from individuals making a concerted effort to step outside of the confines of the established canon. “I really do believe if you’re genuinely interested in film, either as a cinephile or a filmic practitioner, it’s your duty to set a clear intention on your motivations and curiosity to seek new perspectives,” she says.

“The history and industry of cinema is gloomy and it’s easy to feel jaded or complacent about it,” elaborates fellow Film Futura co-creator Ingrid Raphael. “Things are indeed possible outside of the canon—it‘s all about the approach, the direction and, most importantly, the politics.”