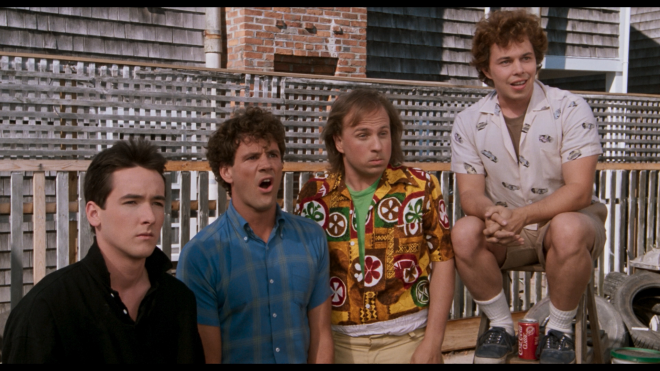 British director Lewis Gilbert is largely forgotten today, but in his heyday he helmed a number of classic films ranging from comedy (the 1966 Alfie, which made Michael Caine a star) and war films (Sink the Bismarck!) to franchise action (three James Bond movies including one of the series’ finest, The Spy Who Loved Me). Though his later career was devoted mostly to character-driven dramedies like Educating Rita and Shirley Valentine, Gilbert’s penultimate effort Haunted (1995) is one of the smartest and eeriest horror flicks of its era. Executive produced by Francis Coppola and photographed by Merchant-Ivory stalwart Tony Pierce-Roberts, it’s an exquisitely mounted period piece with serious intentions and top-notch acting (the cast includes Aidan Quinn, Kate Beckinsale, John Gielgud and Peeping Tom alumnus Anna Massey), but the tastefulness does nothing to undercut the genuine dread that infuses the proceedings; to the contrary, Gilbert’s restrained approach makes the film’s disturbing twists all the more striking and effective. Quinn plays a psychologist and professional skeptic devoted to debunking supernatural phenomena who gets more than he bargained for when he takes a trip to an estate that seems plagued by unexplainable psychic disturbances; as the secrets of the house and its inhabitants are revealed, Haunted unfolds into a riveting ghost story that’s impeccably staged by Gilbert and accompanied by an all-time great score from composer Debbie Wiseman. Neither the music nor the imagery ever forces the scares – there are no gimmicks here, just earned terror that grows organically out of character and theme. Haunted’s relative obscurity in the annals of horror cinema is a crime, but hopefully one to be rectified now that Imprint has released a superb Blu-ray edition of the film; stacked with great supplements, from vintage EPK interviews to new insights from Pierce-Roberts, Wiseman, and others, it’s vital for any serious enthusiast of supernatural suspense. It’s one of several excellent new horror releases from the label; I also heartily recommend Imprint’s pressings of David Cronenberg’s The Dead Zone, the Charlton Heston mummy flick The Awakening, and their generously appointed Hammer boxed set, all of which boast pristine transfers and abundant supplementary features.

My remaining recommendations this week are all comedies, the first two of which are new to Blu-ray and the third of which has been reissued with a new commentary track that’s a must listen. First up is Alan Parker’s 1976 directorial debut Bugsy Malone, a truly unique musical in which child actors play 1920s gangsters and shoot machine guns full of whipped cream instead of bullets. The milieu and story are right out of a Warner Brothers crime classic like The Roaring Twenties, but Parker makes the viewer consider the material in a completely new way by putting the grown-up dialogue and songs (written by Phantom of the Paradise star and composer Paul Williams) in the mouths of children and teenagers (including Jodie Foster, coming off of her triumph in Taxi Driver) and both heightening and deflating the violence; the movie is weird, funny, and stunningly designed and photographed with all the visual precision that would characterize Parker’s later work. Paramount’s Blu-ray premiere features a flawless transfer that showcases cinematographers Peter Biziou and Michael Seresin’s rich palette alongside a pair of brand new interviews with Williams and producer David Puttnam. Also new to Blu-ray, from Warner Archive: writer-director Savage Steve Holland’s exuberant 1986 comedy One Crazy Summer, a visually inventive and infectiously good-natured romp in which Holland seamlessly integrates his influences from the world of animation with an engaging live-action romance between John Cusack and Demi Moore, both early in their careers and extremely charming here. One Crazy Summer was Holland’s follow-up to the equally distinctive Better Off Dead, and like that picture has enough optimistic energy and vivid graphic design for a dozen ordinary comedies – it makes a great double feature with Bugsy Malone, as both films prove that the comedy genre can be as much a source of aesthetic innovation as any other. The One Crazy Summer Blu-ray also contains one of the few audio commentaries that’s just as entertaining as the movie itself, a rollicking track by Holland and actors Bobcat Goldthwait and Curtis Hanson that’s filled with hysterical anecdotes.

Like Bugsy Malone, Carl Reiner’s 1982 parody Dead Men Don’t Wear Plaid draws inspiration from films of the past, but instead of merely recreating the style and iconography of its sources it actually incorporates them into the narrative. In a daring technical and narrative experiment that pays off with huge comic dividends, Reiner and star Steve Martin (who co-wrote the script with Reiner and George Gipe – they would all reunite for the equally hilarious The Man with Two Brains the following year) tell a private eye story in which Martin’s character interacts with actors from films made 40 years earlier; the plot is reverse engineered from classic noir pictures like This Gun for Hire, Notorious, and especially The Bribe, so that when Martin enters an office or picks up a phone he can carry on a conversation with Alan Ladd or Cary Grant or Humphrey Bogart. The hilarious screenplay works whether one is familiar with the movies Reiner is riffing on or not, but the more you know about the traditions and styles that inform Dead Men Don’t Wear Plaid the more impressive and rewarding it is; utilizing techniques of the 40s like bouncing light off of pans of water and lighting everything with blazing arc lamps, cinematographer Michael Chapman gives the whole movie a sharp, luminous sheen, and Reiner employs several department heads (like costume designer Edith Head or composer Miklos Rosza) who actually worked on some of the movies being excerpted in order to give even more verisimilitude to the proceedings. Kino Lorber’s new Blu-ray edition is worth picking up even if you already own the earlier Universal pressing, thanks to an exceptional new commentary track by filmmakers Allan Arkush and Daniel Kremer in which they trace Dead Men Don’t Wear Plaid’s influences, technical innovations and production history and place them in the context of Reiner and Martin’s careers. Arkush and Kremer have become regulars on Kino discs, and they’re as welcome a pairing as Martin and Reiner, erudite in their scholarship and effusive in their passion.