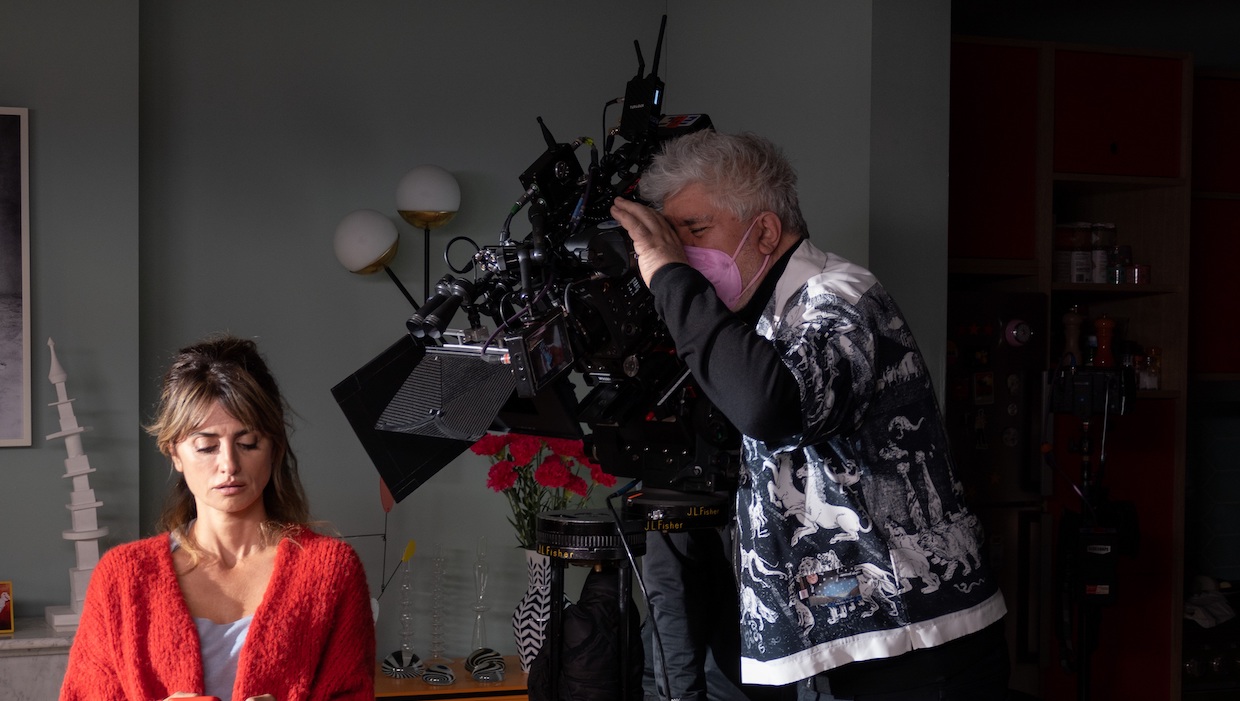 Penélope Cruz and Pedro Almodóvar on the set of Parallel Mothers

by Giovanni Marchini Camia
in Festivals & Events
on Sep 5, 2021

In a tender moment in Pedro Almodóvar’s Parallel Mothers, the opener of this year’s Venice Film Festival, the older of the eponymous mothers teaches the other how to peel potatoes while wearing a t-shirt that says “We Should All Be Feminists.” Since Janis (Penélope Cruz) is at the cusp of middle age, whereas Ana (Milena Smit) has only just turned 18, there’s a suggestion of baton-passing in this Jeanne Dielman reference. One wonders, then, what Chantal Akerman might have thought of the scene in which Ana relates, with a casualness pitched ambiguously between PTSD and nonchalance, that her pregnancy was the result of being blackmailed into a gang rape by her friends from school.

That this story functions within the plot’s broader symbolic ambitions arguably renders it even more upsetting. In the prelude-like opening, Janis asks Arturo (Israel Elejalde), a forensic anthropologist, to help her dig up a mass grave where her great-grandfather was buried after he was executed by Falangists during the Spanish Civil War. Once she gets pregnant from Arturo, who is married, and decides to keep and raise the child by herself, the mass grave subplot is mostly set aside until the last act. Had it stayed that way, serving as a contextualizing frame, Parallel Mothers would have been another fine entry among Almodóvar’s women melodramas. (It forms a trilogy about single motherhood alongside All About My Mother and Julieta; beyond this central thematic, Almodóvar also recycles specific plot elements from the earlier films, for example making Arturo’s unseen wife a cancer patient.)

The rapport between Janis and Ana, who meet in the maternity ward and through a typically elaborate series of contrivances wind up living together, is beautifully realized and moving. Given the emphatic marginality of men in the script, the succor that the women find in their alternative family already expresses a forceful indictment of the enduring patriarchal legacy represented by the Falangists. When Almodóvar dissolves the relationship to focus on the historical narrative, attempting a grand statement inorganic to his more intimately-minded cinema, the resulting denouement in clumsy and didactic. As Paul Schrader proves with The Card Counter, also in the Venice competition, sometimes it’s totally okay—great, even—for directors to tread the same territory over and over. (For an excellent dissection of this, I recommend reading Vadim Rizov’s review.)

Michelangelo Frammartino certainly belongs to this school of thought—literally, with regards to territory. His third feature Il buco, another stand-out of the competition, is once again set in a rural corner of Calabria, the director’s ancestral region in southern Italy. It is once again a minimalist, hybrid fiction shot in an observational documentary aesthetic. And it once again features a very old man as a protagonist. If you’ve seen Frammartino’s Il dono and Le quattro volte, as soon as this man appears in the third or fourth shot, you’ll probably guess that he’s not going to survive the movie.

The man is found catatonic not long after and his slow expiring occurs in parallel to a group expedition to the bottom of a nearby cave—the film re-enacts the 1961 discovery of the Bifurto Abyss, the world’s third-deepest cave. The closing titles specify that the team of speleologists came from northern Italy, which in the early 1960s was experiencing the peak of the postwar economic miracle, called Il boom in Italian (whereas Il buco means “the hole,” making for a meaningful alliteration). The south of the country was left behind in this economic upswing—something the film illustrates through the mere fact that it takes little more than some rudimentary caving equipment to create a convincing period piece—and since the old man is presented as the embodiment of the archaic culture that was wiped out by the boom, we’re invited to read the film as a kind of parable.

I can’t say this dimension did much for me, though it is fun when the cross-cutting between the dying man and the inside of the narrow tubular cave gives the impression that little people with head torches are crawling through his viscera. Strictly as a cinematographic experience, on the other hand, the film is astounding (and a superior demonstration of the worth of theatrical exhibition to Denis Villeneuve’s monumental but drab Dune, which premiered out of competition). The images of the landscape, for the most part captured from extreme distances, are typically beautiful and impressive, but it’s the photography of blackness inside the cave that is the true wonder of this film. Tracking the speleologists’ slow and methodical progress, the veteran DP Renato Berta—who has worked with the likes of Godard, Straub/Huillet and Resnais—creates one incredible composition after the other. Shots typically start as a black canvas that he then paints across with light: the questing beam of a torch or the burning sheets of newspaper that the explorers drop into holes to gauge their depth, letting the flame spiral and dramatically whoosh through the void. The sound design muffles voices—generally, very little is said in this ambience-heavy film—but accentuates every footstep, drip and echo, taking full advantage of surround possibilities to maximize the immersive impact of the images. There were moments where I actually held my breath at the sight of someone squeezing themselves feet first through an impossibly narrow passage without knowledge of its length or what lay beyond.

Ricky D’Ambrose’s The Cathedral was shown in the Biennale College section, a funding/mentoring program that gives €150,000 for the production of a director’s first or second feature. That the world premiere must then be at the festival is a mixed blessing, as the section isn’t given much visibility and films often get overlooked (Anna Rose Holmer’s The Fits is one notable success story). It would be a real shame if this were to happen with D’Ambrose’s excellent second feature, whose screenings were in the first three days and was therefore vying for attention against virtually all of this year’s biggest names: Almodóvar, Schrader, Jane Campion, Paolo Sorrentino, Pablo Larraín, Maggie Gyllenhaal—and that’s only counting the main competition. With its precise stationary compositions, Bressonian motifs (many close-ups of hands), muted performances and fondness for analogue textures and vintage graphic design, The Cathedral is recognizably the work of the author of Notes on an Appearance. But while the first film was a quaintly postmodern mystery story, here D’Ambrose employs many of the same aesthetic strategies towards something more personal and poignant.

One could reductively compare the film to Boyhood, since it charts a boy’s life from childhood to university, with the sporadic jumps forward in time integrated into a seamless flow. And although both experiment with the representation of subjectivity, the perspective in The Cathedral isn’t anchored in the present tense but emphatically backwards-looking. The protagonist, played by a succession of remarkably similar-looking actors, is a passive presence throughout, more of an observer than a participant in the narrative. By singling out moments of emotional importance in both his life and, through clips of news broadcasts, the society around him, the film builds a cumulative portrait of a family during a specific period of American history. While watching, I didn’t know anything about D’Ambrose except that he’s around the age of the protagonist, who is born in 1987. I was surprised when I later read the director’s statement and discovered that in writing the script he only took loose inspiration from his own family history. Especially the difficult relationship between the protagonist and his father, which gradually becomes the focal point, is imbued with so much intimacy and feeling, building to a devastating finale that reads like a striving for closure, I was sure it had to be autobiographical.