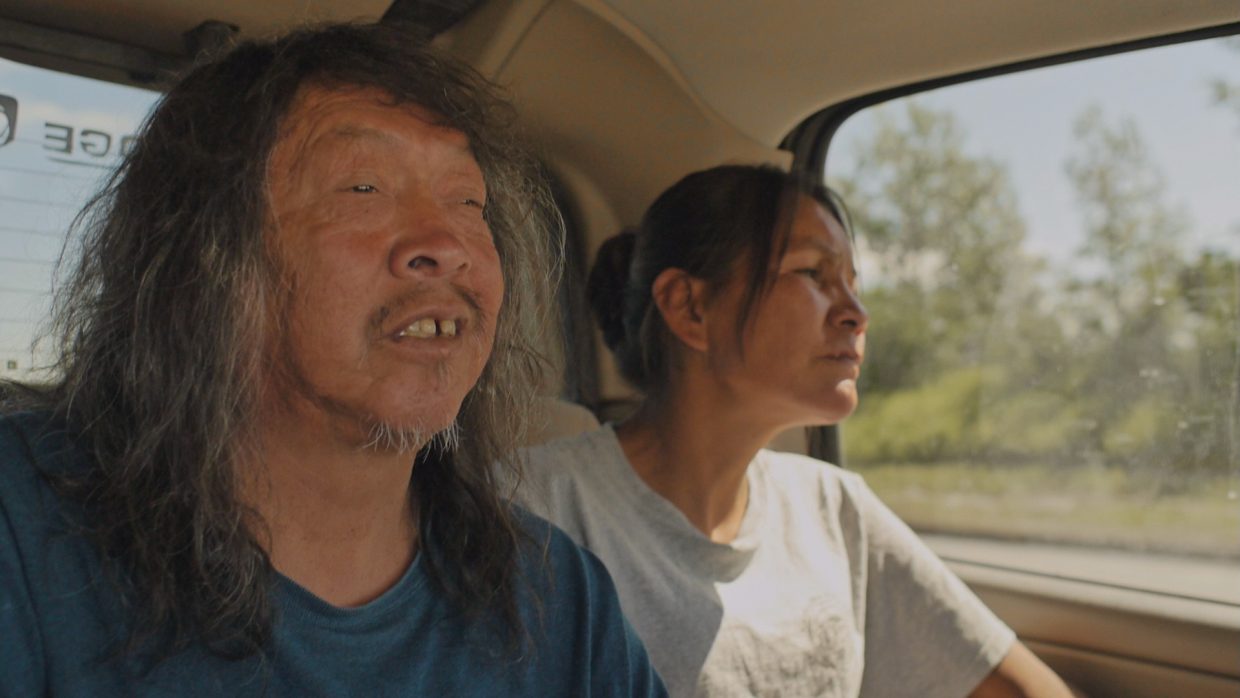 Kímmapiiyipitssini: The Meaning of Empathy (© Seen Through Women Prod and NFB)

by Lauren Wissot
in Directors, Festivals & Events, Interviews
on Sep 18, 2021

Winner of both the Emerging Canadian Filmmaker Award and the Rogers Audience Award at this year’s Hot Docs, Kímmapiiyipitssini: The Meaning of Empathy is the latest documentary from multifaceted artist Elle-Máijá Tailfeathers (The Body Remembers When the World Broke Open, which was picked up by Ava DuVernay’s ARRAY after its 2019 Berlinale premiere and is available to stream on Netflix). A writer, director, producer and actor – she currently stars in Danis Goulet’s Night Raiders, which just debuted at TIFF – Tailfeathers is also a member of the Kainai First Nation in Alberta. It’s a community that continues to be ravaged by the opioid epidemic, much like many across Canada and here in the US. But for the people on this Blackfoot reserve, unlike the populace of non-Indigenous small towns, the addiction crisis is just the most recent scourge in a never-ending series of generational traumas.

Connecting the dots from colonization to abusive residential schools and a state-sanctioned cultural genocide would be a worthy cinematic endeavor in itself. But with Kímmapiiyipitssini: The Meaning of Empathy Tailfeathers does such and then goes much further, linking the names and faces of those on both sides of the healthcare frontline today — including the reserve’s stoic and compassionate physician Dr. Esther Tailfeathers, the director’s mother — with their ancestors whose traditional approaches to wellness in body and soul seem much more sane and civilized. The result is a soaring portrait of tragedy and resilience, yes, but also a handbook for healing that those of us in the privileged classes could learn a lesson or two from.

Filmmaker was fortunate enough to catch up with the prolific Tailfeathers soon after TIFF and just prior to her doc’s next stop at the Camden International Film Festival (September 16-26).

Filmmaker: As a busy writer, director, producer and actor why did you decide to embark on the sprawling emotional journey that is Kímmapiiyipitssini: The Meaning of Empathy? Were you working on other projects during production? How long did this even take?

Tailfeathers: The opioid crisis, as it’s often referred to, first hit our community seven years ago. I was profoundly moved by the work of so many of our community members, volunteering countless hours in the fight to save lives. I wasn’t seeing that work reflected in the coverage from the news media. Instead I saw the standard, problematic paternalistic coverage of my community. As a community member I felt a responsibility to make this film – both to counter those images, as well as to create a vehicle for dialogue for other Indigenous communities experiencing this crisis.

Much like in the broader public, harm reduction is a very polarizing topic within Indigenous communities. I witnessed the ways it was working within our community; and I knew that a documentary held the capacity to potentially deepen people’s understanding of what harm reduction looks like through the lived experiences of my community members.

Ultimately, the film took five years to make. During that time we made The Body Remembers When the World Broke Open, and I made another feature doc (in collaboration with the Musqueam First Nation) called c̓əsnaʔəm, the city before the city. I also acted in Blood Quantum and Night Raiders.

Filmmaker: Your medical doctor mom is really the grounding force of Kímmapiiyipitssini: The Meaning of Empathy, though the faces of those struggling with both addiction and generational trauma haunted me for days. How did you find your characters and stories – and ultimately decide who and what to focus on?

Tailfeathers: My mother is my guiding light, and she truly is the embodiment of this Blackfoot value of Kímmapiiyipitssini, to have empathy and compassion for all. I did my best to channel her and her work in the process of making this film. I recognized very early on that as someone who neither lives with substance use disorder, nor works on the frontlines, that I had a lot of learning and unlearning to do regarding my knowledge of substance use disorder and harm reduction. Documentary film has a long history of extractive storytelling, and I was very aware of the fact that despite being a community member I was still in a position of great privilege as the filmmaker. So it was this constant process of self-interrogation to ensure that I wasn’t replicating extractive filmmaking methods.

I knew that I had to start the learning process through community. So I spent time with over 50 people from my community, and from the urban Indigenous community in Vancouver, just learning about substance use disorder and harm reduction. It was through years of relationship building that I found most of the film’s participants. There are over 200 people from my community who contributed to this film in some capacity, many of whom appeared in front of the camera and are not in the final cut.

It was truly challenging to narrow down this massive story into a cohesive two-hour narrative. My editor Hans Olson and I spent a lot of time just experimenting with storylines. The first assembly was nearly five hours long. David Christensen, my producer at the National Film Board of Canada, was also instrumental in helping us find those moments that make the film what it is. However, I also showed the film to all of the participants before we reached the fine cut to ensure that they were happy with how they were represented. It was crucial to me that I also receive feedback from people with lived experience similar to that of the documentary participants – and also from people with no connection to the film industry in order to address any potential blindspots.

Filmmaker: I’m also wondering how various aspects of your personal and professional life interact. Do you even draw a solid line between real life, documentary and fiction – or does one encounter or project simply inspire another?

Tailfeathers: There’s a Blackfoot belief that we are all born with gifts from the Creator and it is our responsibility to honor those gifts through hard work. I’ve been working in this industry for over 15 years now, and I’m sort of at this point where I just try my hardest to honor this gift of story. I think about everything my ancestors and family members experienced, endured and overcame so that I can have the life I have now – and I don’t take that for granted. Not for a single moment. Every project offers something different, and I try to work with the intention of honoring the strength and beauty of my people through story.

Filmmaker: Indigenous filmmakers increasingly seem to be grabbing the spotlight in recent years. Taika Waititi (one of the EPs of Danis Goulet’s TIFF-premiering Night Raiders, which you star in) has obviously been moving the ball forward, especially behind the scenes globally. And here in the US, Sterlin Harjo just released his all-Indigenous-cast-and-crew TV series Reservation Dogs. That said, the execs at the top that ultimately call the shots are still almost exclusively white. Do you ever worry that the film industry’s enthusiastic focus on “diversity” and “inclusion” might also just be a way to avoid expanding actual equality?

Tailfeathers: As someone whose identity exists at the intersections of various margins, I’m so very tired of talking about “diversity” and “inclusion.” Those terms inherently center power and privilege, and don’t really do much to dismantle systemic oppression within the industry. I think works like Night Raiders and Reservation Dogs are doing that work by offering our communities something we’ve never experienced before. To feel seen and heard, and to see your people’s joy and love onscreen is a very powerful thing. There is profound strength in story, and these projects are connecting with audiences in ways that cannot be ignored by those who hold positions of power within the industry.

What these projects are also making very clear is that there is not a lack of talent within the Indigenous film community, there is a lack of opportunity. When we are afforded the resources necessary to make the work, we are going to blow it out of the park. Indigenous excellence is a beautiful thing, and I am so proud of the many talented hearts and minds changing the industry right now.

Filmmaker: Night Raiders is a fictional thriller explicitly inspired by the very real legacy of Canada’s residential schools – which has lately been in the news with so many remains of children horrifically being discovered in mass graves. Of course Kímmapiiyipitssini: The Meaning of Empathy also delves deeply into this shameful and tragic aspect of colonialism as well. As far as I know, though, the Catholic Church has refused to issue an apology or to even make any amends. So do you see yourself as an activist artist? And if so, what are you hoping to achieve?

Tailfeathers: I don’t feel comfortable with the term activist. I’m a community member doing the necessary work that so many others are doing. I recognize that I have a unique position through my work as a filmmaker and actor, so I think I’m just trying to contribute to that community work with the tools at hand.

What I’m hoping to achieve through Kímmapiiyipitssini: The Meaning of Empathy is to show what that community work looks like. There wasn’t a single day on that five-year long journey where I wasn’t absolutely in awe of my people’s strength and our capacity for love. We didn’t create these problems, but we are doing everything in our power to heal and move forward despite immeasurable barriers. Kainai is located in the Canadian prairies where there is near-constant open hostility toward Indigenous people. This film is a means of humanizing people who are rarely afforded that dignity in our own homelands.