“I Would Find Myself Wondering Why My Face Hurt So Much at the End of a Shoot Day, and It Was Because I’d Been Smiling the Whole Time”: Penny Lane on Listening to Kenny G 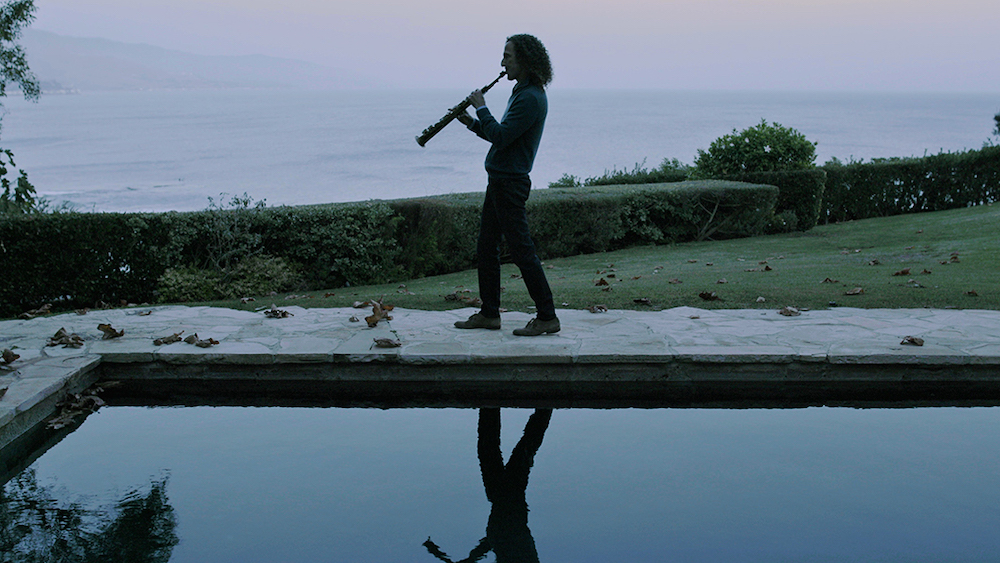 by Lauren Wissot
in Directors, Interviews
on Dec 2, 2021

As with all of Penny Lane’s films, Listening to Kenny G, the idiosyncratic auteur’s TIFF-premiering, DOC NYC-opening, exploration of the beloved/reviled “smooth jazz” saxophonist and his globally ubiquitous sound (to this day “Going Home” signals closing time throughout China) turns a straightforward subject into an unexpected philosophical inquiry. In this case, Lane begins her journey down the G-hole with a simple question: Why does the bestselling instrumentalist of all time, our most famous living jazz musician, “make certain people really angry”?

Using interviews with G as well as elite jazz critics and academics as well as archival footage, Lane arrives at some answers — what the director discovers, perhaps not so surprisingly in hindsight, says less about Kenny G than it does about us.

Just prior to the doc’s HBO debut on December 2, Filmmaker caught up with Lane to find out more about the film – including, of course, what it was like to listen to a lot of Kenny G.

Filmmaker: So how did this project come together? Was it an immediate yes when you told Bill HBO Music Box series creator Simmons you wanted to do a film about Kenny G, or was there some skepticism?

Lane: Bill Simmons asked me to pitch him ideas for this series of music documentaries they were doing for HBO. I was the skeptical one, actually, because “music documentary” is not a form I have much affinity for. I wasn’t even sure I could think of one that I’d want to do. But I wanted the job, so I decided I’d try to come up with something!

I thought of Kenny G – and more specifically, why some people hate the music of Kenny G so much (when almost everyone else in the world loves his music). I knew it was a good idea. I could see the whole thing in my head – the tone, everything. But I wasn’t sure what Bill would think. I figured he’d either love it, or never speak to me again. Luckily, he loved it and immediately said yes. He got it right away. It was a dream collaboration for me.

Filmmaker: I’m very curious to hear about some of the challenges you faced in interviewing Kenny G, and how you dealt with them. He seems such a tough nut to crack. On the one hand, he strikes me as an upbeat delight to be around; but on the other, a people-pleaser is always aiming to tell you what they think you want to hear. Was the experience draining?

Lane: He is a total delight. I would find myself wondering why my face hurt so much at the end of a shoot day, and it was because I’d just been smiling the whole time. He was generous and helpful, and he really wanted to do anything he could to help make it the best film it could be. He also had ten times the amount of energy I had.

Kenny seemed to me quite open. I never really felt he was being cagey or that he was dodging the question. More often it was that my question just somehow didn’t apply. Like at one point, I kind of burst out in the interview with, “Come on Kenny, don’t you have any demons?” And Kenny paused for a long time, and asked with total sincerity, “What’s a demon?” An amazing moment we didn’t get to use.

Yes, he’s been in the media for a long time, and he’s been telling some of these stories for a long time. I’m not claiming there’s some kind of off the cuff authenticity that I was discovering that nobody had ever seen before. But it’s also true that with Kenny what you see is kinda what you get. He’s always been pretty much just the same way – which is to say, himself!

Filmmaker: You also interview quite a number of academics and music critics – an overwhelmingly male bunch. Did you have trouble finding women with a strong opinion about his music? Do men tend to spend more time thinking (raging?) about Kenny G?

Lane: Well, the world of music criticism in general is pretty male-dominated, perhaps even more so in jazz. For what it’s worth, I haven’t come across a lot of strong hatred toward the music of Kenny G from women. I’m not saying it doesn’t exist, but the “raging” as you say seems to pop up more in the behavior of men, at least publicly where I could see it.

I spent months and months putting together my cast of critics. Ultimately, there were five: Ben Ratliff, Jason King, John Halle, Will Layman and Chris Washburne. I wanted people who I knew would be nuanced and real with me, and would have a sense of humor. Honestly, I was afraid that some critics might feel, I don’t know, insulted or something if I approached them with this. So finding some reason to believe they might actually have an opinion was really important to me! Each of my five critics had written something in the past that was either about Kenny, or Kenny-adjacent. Along the way I asked everyone I spoke to about female critics whose area of expertise or interest felt relevant, and I just didn’t find anyone. Not to say there aren’t any (of course there are), but again I wasn’t going to cold-call random critics with my Kenny G request if I didn’t have any trail of their thoughts that would lead me to them.

Though on the “smooth jazz” expert side, there were a lot more women. For example, we got Pat Prescott, who is a radio personality who’s been deeply embedded in that format for decades. She was terrific and brought a much-needed different take on the whole phenomenon.

Filmmaker: The doc also draws from a wide range of sources from a career spanning decades – from music videos, to concert footage, to YouTube. How did you decide what to include in the final cut?

Lane: On the simplest level, it had to fit the theme and further the story. I had the most amazing editors, Cindy Lee and Adam Bolt. They were so smart and skillful at bringing the music and archival pieces together; I found myself just saying “Yes!” to every idea they brought to the table.

That said, I am a very involved director in the edit room (some have said “unusually involved”). I screened all the archival myself as well. I don’t necessarily screen all the production footage, but I always want to screen all the archival, because I want to catch the little things that maybe someone else might overlook. Those things tend to be the things that feel the most “me” – to myself, anyway. So I’ll watch all the archival, and make notes, and keep harassing my editors with comments like, “Okay, but where can we put Kenny serenading Larry King?” And, “I’m still desperate to use that footage of Kenny in the Macy’s Day Parade!” until I get my way (or it’s clear there’s just no place for it).

Filmmaker: Finally, I’ll come clean and admit that I’m one of the Kenny G haters – and also that Kenny G is absolutely right when he says in the doc that our feelings about his music say more about us listeners. So did you personally have an opinion about his music before tackling this project, and has that opinion at all changed?

Lane: I wasn’t a hater, but I was also not a fan. I was more indifferent; I didn’t think about it much, other than to note how funny it was to me that such inoffensive music could make so many of my friends so angry. I came of age in the 1990s, when Kenny’s music was kind of forced on everyone, whether you wanted to hear it or not. In that sense, I think I was like Ben Ratliff who said that he associated the music with an attempt to kind of placate or soothe me in various corporate environments.

My personal musical taste has not changed in any way. I wouldn’t have expected it to. But I have gotten a much deeper appreciation for what his fans see in and like about the music. And getting to know him has also provided insight into why the music is what it is; he is, after all, an artist producing art, and understanding the artist’s soul can prove a pretty powerful key into unlocking the meaning and function of that art.

Also, I was deeply emotionally affected by watching all those wedding videos where people are getting married to Kenny’s music. There’s one song called “Forever in Love” that is really popular for weddings. And now when I hear that song I get pretty emotional, because music is all about associations, right? And now I associate that song with those people, and I can get a little teary. Whatever you think of his music, there’s something so undeniable and inarguable about the fact that so many people choose to play it on the most important days of their lives. That kind of love is beyond “fandom.” It feels very real to me. Much more real than the hate.