“We Found Ways to Combine Drama Therapy with Filmmaking into Something New”: Director Robert Greene on the Netflix Documentary Procession 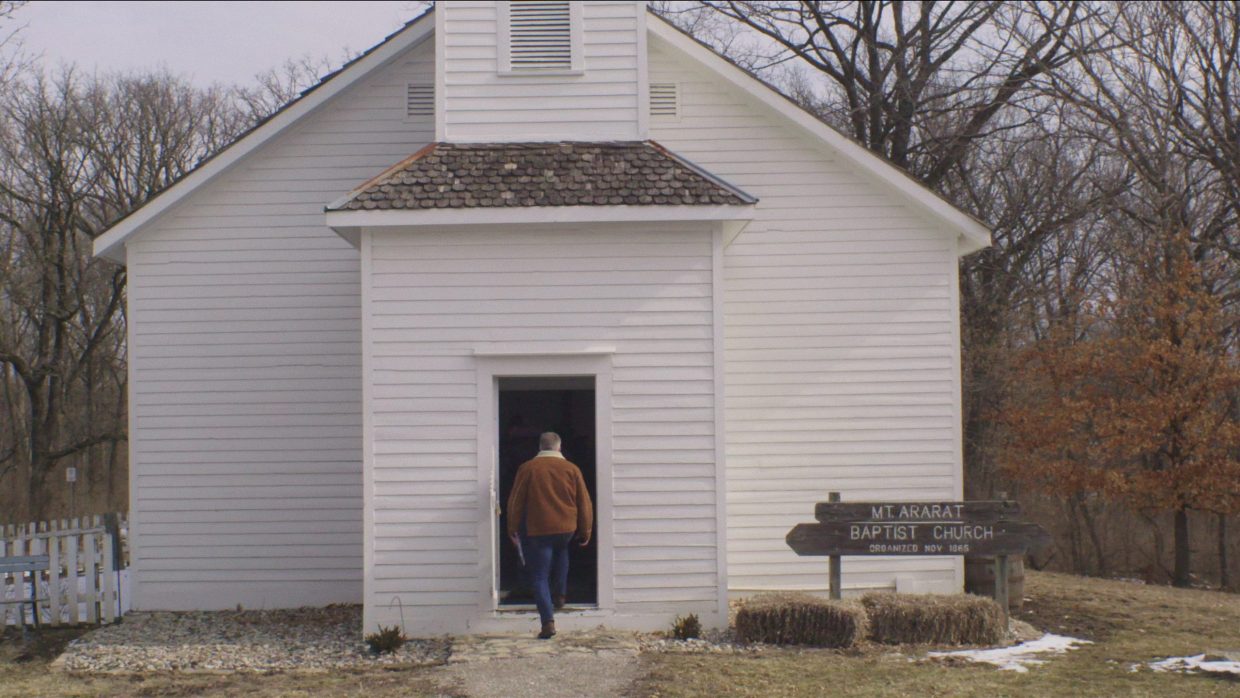 by Lauren Wissot
in Directors, Interviews
on Nov 22, 2021

At the root of the word “procession” is “process” — really a fitting description for any Robert Greene film. But the title of  the nonfiction veteran’s latest foray into character-collaborative doc-making has other meanings. It nods specifically to the Holy Spirit’s procession and also to the dictionary definition of people moving forward, a march that includes the risk-taking filmmaker himself. Procession (which premiered at Telluride and just hit Netflix November 19) is perhaps Greene’s boldest cinematic move yet.

Once again the director (and “filmmaker-in-chief” at the University of Missouri’s Murray Center for Documentary Journalism) blurs the lines between narrative and nonfiction, casting six male survivors of childhood sexual abuse by Catholic priests and clergy in a creation of their own making. It’s “a radical experiment in therapeutic collaborative filmmaking” — one specifically designed to return power to the victims. Supported by a crew that includes a trained drama therapist with a background in sexual assault prevention and education, the mainly midwestern men painfully and painstakingly mine memories, dreams — and, for one, still raw anger at a woefully inadequate legal system — to stage a series of often inspired fictional scenes. (Another uses All That Jazz, Fosse’s fake take on real life, as a touchstone.)

Shortly before the streaming release of Procession, Filmmaker reached out to Greene to learn more about the film and, yes, his own process, but also whether we might see more instances of “therapeutic cinema” in the future.

Filmmaker: Can you let us in on how this film came about? Would these men have even been on your radar (and of interest to collaborate with) without your connection to Missouri?

Greene: After realizing that I should have had a therapist on my last film Bisbee ‘17 I fell into a little bit of a personal and professional crisis about what our work was supposed to be, and what I had been doing and not doing in my films — and really my life.

My sister-in-law Mary David suggested I read Bessel van der Kolk’s The Body Keeps the Score, which is about how trauma is stored in the body and can be helped by doing things like drama therapy, which is the intentional use of role play and theatrical arts for therapeutic goals. At this point I realized that’s where we needed to go: embrace the therapeutic possibilities of documentary and staging scenes. At the same time I was thinking about Missouri, my adopted home, and looking for inspiration. I do think there was plenty of motivation for me to shoot in Missouri, including practical reasons because I have a family and I teach in Columbia at the Missouri School of Journalism. I saw the press conference that opens Procession. But we didn’t reach out to Mike, Michael or Tom — three survivors who would ultimately be in the film; we reached out to Rebecca Randles, their trauma-trained lawyer. She was ultimately our way into this world. She cast the film, and it was her long relationship with each of the guys that allowed us to get going.

Filmmaker: Your key crew includes a trained drama therapist with a background in sexual assault prevention and education – which strikes me as perhaps similar to the role of an intimacy coordinator on the set of a narrative film. So what was it actually like working with Monica? Should the documentary community follow the fiction world and make this a thing? (I was just thinking the recent Sabaya controversy might have been avoided had the director added a trained therapist to his production crew from the start.)

Greene: I think all films — both documentary and fiction — could benefit from having someone like our drama therapist Monica Phinney on their sets. We’re not doing strict drama therapy in the film, but we are absolutely influenced by the tenets of her creative arts therapy practice. Monica was very helpful for many of the guys on a scene-by-scene basis: helping them get into roles, helping them find ways into the actual creative process, and helping them de-role at the end of the day. She introduced breathing exercises, was a crucial sounding board when needed, and stepped in when things got harder and we needed someone to keep us on the rails. Maybe most importantly, she and I worked very closely together before, during and after shoots, as we found ways to combine drama therapy with filmmaking into something new. She was essential to the process.

Filmmaker: Michael, a survivor whose site of abuse has been torn down, seems nearly rudderless (though he channels his pain into helping the others – perhaps proof that he’s still a man of faith). Another survivor, Dan, is actually a film and TV locations manager by profession. It’s quite surreal to see him scout locations for the scenes of crimes that were perpetrated against him. Could you talk a bit about the role of locations in the film?

Greene: Well, first I would say that Michael is anything but rudderless. He was an essential leader of the project, not least because he was skeptical and concerned throughout. With a project as risky and challenging as this, skepticism and doubt are just as important as confidence and creative force. We needed to be constantly questioning, and I think you see Michael do that in the film.

In terms of locations I had from the beginning been attracted to the metaphorical possibilities of the image of Dan as a survivor doing the location scouting — looking for truth, looking for peace. “Locations” was an early working title idea for the whole film. But the act of going back to places of abuse to take power back from those locations was something the guys came up with. First it was Ed who wanted to go back to the cathedral in Cheyenne, Wyoming that he hadn’t been to in 35 years. When he rang the same bell that he had rung as a child and it filled us all with such joy and hope, this idea of taking back these spaces became a priority for each of the guys. We would have never conceived of going back to such charged spaces; we would have been too scared. It was the guys who latched onto that idea — each for different reasons — and Dan was crucial in making it happen, of course.

Filmmaker: Terrick, the child actor you hired, is almost a guardian angel. So empathetic and wise beyond his years. Which, to be frank, scared me a little. How were you able to ensure that he could actually handle this material (and not just tell you that he could handle the material)? And what effect did adding him have on the production’s dynamic?

Greene: Having Terrick’s parents and grandparents involved was essential. Terrick is, as you say, an incredibly empathetic and talented kid. We were constantly talking with him and having Monica talk with him — so much so that at one point our producer Doug Tirola had to ask the guys to stop hovering over him. I think what Doug saw was that, in some ways, the guys were projecting their own anxiety onto Terrick.

The truth was that he understood exactly what he was doing and considered it a job. He was there to act, to help and to give what he could. He had heard these news stories and had never been abused. Like me, he wasn’t Catholic. These spaces weren’t scary for him. His power was never taken away — and power being taken away is the source of the worst trauma, of course.

It turns out that when you don’t abuse children they can do remarkable things. As a father of a 12-year-old boy (Terrick was 12 when we were filming), I can tell you that kids can be incredibly resourceful and compassionate and strong when you give them agency to make decisions (and continue to support them and make sure they’re physically and emotionally safe). Having him on set was an absolute joy. He helped make the film about the future, not just the past.

Filmmaker: All the survivors collaborated in the editing process as well — something anathema to most documentary filmmakers. That said, you’re certainly no stranger to breaking nonfiction cinema’s “rules.” Have you included your characters in the editing process before? How do you ultimately balance compromise with your own artistic vision?

Greene: I’ve always shown participants cuts before I’m done editing and have given them chances to weigh in, but this was wholly different. It wasn’t even about my artistic vision — it was our vision. The film absolutely had to be something the guys would consider their own. It had to be something the producers Doug, Susan Bedusa and Bennett Elliott, the DP Rob Kolodny, Monica, Rebecca, Sasha — everyone listed in that “film by” credit at the top of the film — would consider their own. That’s what this project is about.

Now of course I had to make crucial choices, and I had to vigorously defend those choices! Being a good collaborator and trying to represent everyone doesn’t mean abdicating my responsibilities as the director/editor. I made countless creative choices, and I had to defend them as we made our way through the editing process together. The guys all had veto power, but I would vigorously argue for what I felt was right. So would they. It’s not about compromising in a way that muddies things; it’s about constructing something that truly embodies a collective vision. That wasn’t easy but it was absolutely possible, as long as the guys always knew they had power in our dynamic. Power was taken away from them at every turn as children and as survivors – and we were absolutely not going to repeat that dynamic. More often than not, they would say to me some variation of, “You’re the director, you’re the editor who knows what to do here. Go for it. We trust you.”