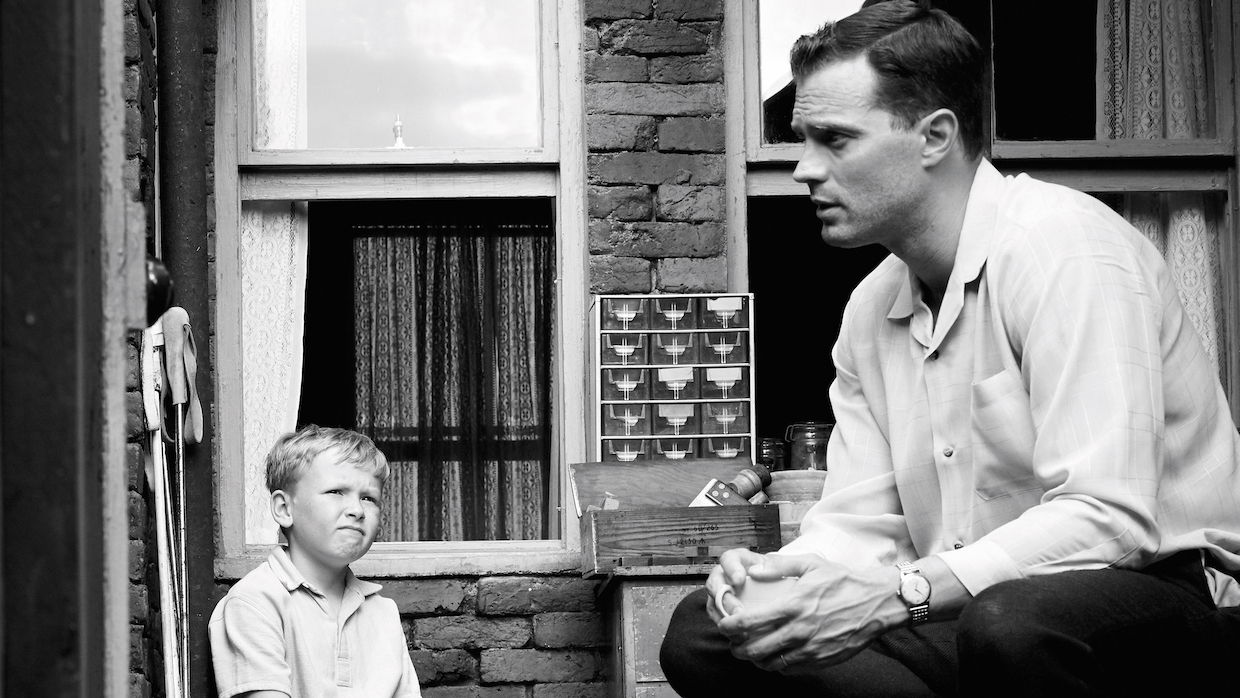 Belfast offers a poignant look at a working class childhood in an era of increasing political tumult. Set in 1969, during the early days of the Troubles in Northern Ireland, writer/director Kenneth Branagh’s deeply personal film is shot in black and white and centers on a family doing its best to get by. The protagonist, Buddy (played by Jude Hill in his debut feature role) is a charming 9-year-old Branagh surrogate with a toothy smile and rough-and-tumble costumes of collared shirts, shorts, and high socks. The ’60s has long been one of the most frequently referenced decades in fashion, and while Belfast takes place during this time, it’s noteworthy for the way it presents unfussy everyday fashion rather than the counterculture looks and miniskirts more often associated with the era.

Costume designer Charlotte Walter, whose previous credits include the Watchmen television miniseries and films like Tristram Shandy: A Cock and Bull Story, Submarine and Four Lions, prioritized a sense of lived-in authenticity. “I wanted to use as many original clothes as possible,” she says. “The fabric of the original clothes was very particular. It was a time when manmade fibers were just starting to be popular. Because they were not natural, they had a sort of three-dimensional feel to them. They were quite harsh in a way.” Such pieces, which were washable and easy to wear, were ideal for the film’s no-nonsense milieu. The characters have intentionally limited wardrobes. Even the most outwardly fashionable character, Buddy’s mother (known simply as “Ma” and played by Caitríona Balfe), had at most 10 or 12 looks. “We would use the same skirt twice and give her two different blouses, to make it interchangeable, like a real wardrobe,” Walter explains. Ma’s relaxed yet stylishly tailored silhouettes bring to mind icons of chic ’60s femininity like Mary Tyler Moore on The Dick Van Dyke Show. ​​​​Ma “wants to look like a modern mother and wife,” says Walter. “No matter what she wears, she still looks like a woman who could run up the street and grab her son.” Given the film’s personal story, Branagh shared recollections of family memories with Walter, which in turn helped guide the costuming: “Ken said to me that his parents were proud. And they loved going to the cinema, which they called ’the picture house.’” Their engagement with popular culture (seen throughout the film in the family’s movie outings and TV watching) informed how they dressed: “They would get ideas from reading a magazine or going to the cinema. They wanted to dress slightly like the people they saw in films, but obviously within their boundaries of what they could afford.” ​​The characters’ pride manifests itself through fashion. As Walter describes it, “Although they were very working class, they would have a good coat and one good pair of shoes and look after them.” With a limited selection of costumes for the characters, “each garment needed to say a lot.”

In the pre-fast fashion era in which the film is set, making one’s own clothes was common practice. “Ken said to me that both his mom and his grandma were great knitters,” says Walter. “So, I thought, ’Of course they would knit themselves cardigans.’” She sourced a variety of authentic vintage clothing—“I’m a bit of a hoarder and have been since I was about 16, so I have a lot of original fabrics myself and quite a lot of original pieces, and we used a lot from my collection.” Walter also had custom pieces knit from original ’60s patterns, so a sweater could be “totally reproduced as if it was an original garment.”

In the case of Granny, played by the legendary Judi Dench (with whom the designer had previously worked on Red Joan and Blithe Spirit), Walter used older patterns: “​​I thought Grandma would probably still be wearing a ’50s cardigan.” Walter brought a personal touch to Dench’s costumes, taking inspiration from her own grandma. When it came to costuming Granny, “I had two pinafores. One was an original ’60s pinafore dress—they’re practical dresses that you could work in as well. But also, strangely, I’d kept some fabric that had been my grandmother’s, which she’d used to make a similar garment for herself. I’d always hung onto this fabric thinking it was interesting and very ’60s and thought, ’One day, I’ll use that.’” Walter was finally able to make perfect use of the fabric: ​​“I had it in two colorways. One was navy and cream, and the other one was burnt orange and cream. The navy and cream was far too much of a contrast, if we were going to be seeing it in black-and-white, whereas the burnt orange and cream seemed like an ideal fabric to use for her dress. It had a dynamic texture. So, I had it made for Judi.”

Walter’s work captures three distinct generations of characters without ever resorting to caricature or what she calls “over-costuming.” To capture Buddy, his brother and their friends and classmates, Walter studied contemporary images of children in Belfast. Buddy’s wardrobe is simple: “He had a couple of pairs of shorts, his good jacket, his school jacket, three shirts and a bowtie for special occasions.” An outfit that includes a bow tie and shorts has a particularly ’60s charm—the bow tie seems classically grown-up, while the tailored shorts show he’s still a little kid who’s happy to run into the street and play at a moment’s notice. “Ken actually told me that his mom had done exactly that—she put a bowtie on him for special dress affairs,” says Walter, “and his little tie that he wore to school was never quite set where it should be.” Buddy’s outfits may include formal flourishes, but the tailored yet slightly off-center silhouette sweetly suggests childhood mischief. While the fashions of Belfast are simple on the surface, their fabrics and shapes expertly recreate a long-gone era.