I Wanted To Go Deeper Than Just a Portrait of a Band”: Rita Baghdadi on her Sundance-Premiering doc Sirens 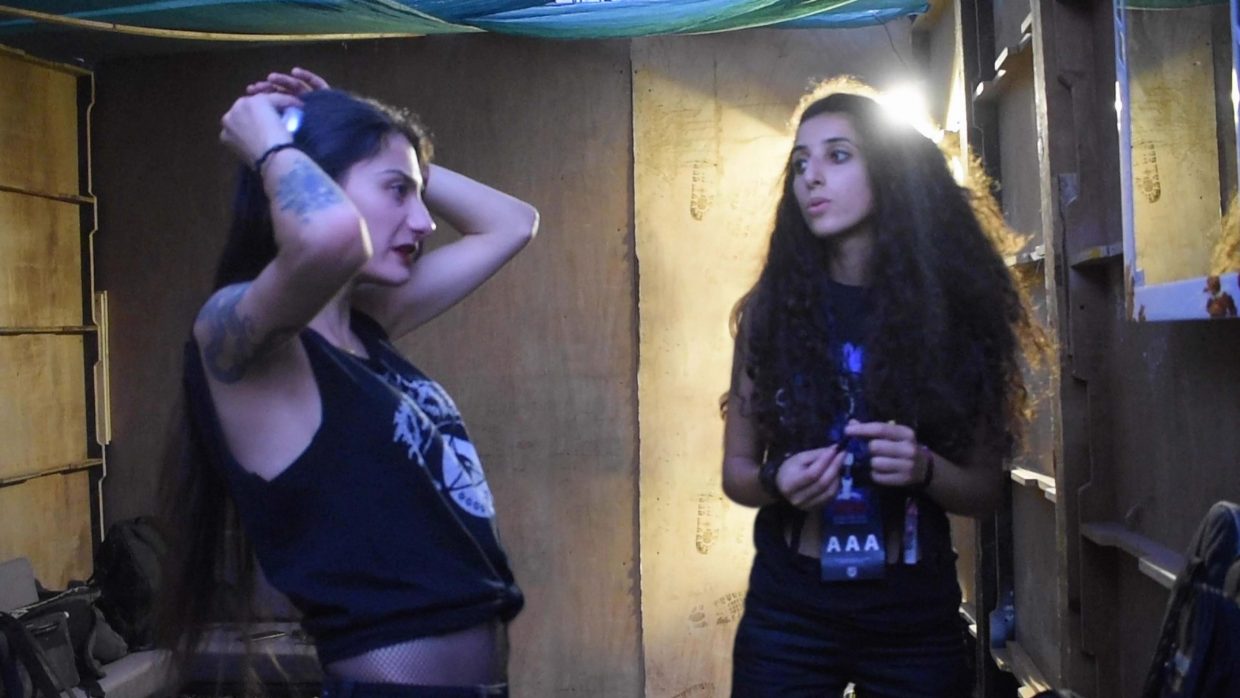 Trying to make it as a twenty-something in a band is hard enough. But when that band is Slave to Sirens, the Middle East’s first all-female metal group, the stakes and the obstacles can seem off the charts. Which is exactly what makes Moroccan-American director and cinematographer Rita Baghdadi’s Sirens, world-premiering in the World Cinema Documentary Competition at this year’s Sundance, so engrossing. The film focuses on the band’s co-founders and guitarists Lilas and Shery, who over the course of a brisk 78 minutes navigate friendship and sexuality, artistic vision and international fame – all within the explosive confines of Lebanon’s often misogynistic and homophobic society. (And then the Port of Beirut literally blows up.)

Luckily, Filmmaker got the chance to catch up with Baghdadi (My Country No More) just prior to the doc’s January 23rd debut to learn all about Sirens and Slave to Sirens – and creating an environment in which Arab women can become the stars of their own true stories.

Filmmaker: So how did this film originate? Did you connect with Lilas with the idea for the documentary in mind?

Baghdadi: For years I had been wanting to make a film set in the MENA region (Middle East / North Africa). I wanted to make a film that would challenge the Western perception of what it’s like to grow up in the region; to counteract the negative stereotypes of Arab people that I felt damaged me when I was growing up. I just always assumed that, since I’m Moroccan, the film would take place in Morocco.

Fast forward a few years. I was searching for new music online when I came across Slave to Sirens. They had just put out their four-song EP and I was blown away by their talent. Then I saw a photograph of the band – five young women standing in the middle of a Lebanese forest wearing all black. You know when you see a picture of someone and you get this feeling like you have to meet them? That’s how it was. I remember Lilas was standing on the far left side of the frame with her arms crossed. I can’t explain it, but something about her presence drew me in.

I messaged the band online and Lilas and I ended up Skyping for hours, talking about everything. Then I met the rest of the band on a video chat and they invited me to come meet them in person and film a bit, with no real pressure to make anything specific. In November 2018 my producer Camilla and I went to stay with Lilas for a week.

The other part to this origin story is actually something I didn’t even realize until recently. Just prior to me connecting with the band in 2018, my dad in Morocco had been diagnosed with a terminal brain disease. Looking back on it now, as I was struggling with the thought of losing my dad I think I was looking for a way to reconnect to my Arab side. I recognized myself in Lilas, and that was a really powerful moment. I’m so thankful we met and were able to make this film together because it changed my life for the better.

Filmmaker: How long was the shoot, and how did you go about shaping the narrative? Did you always intend to center the story on the relationship between Lilas and Shery, or did that structure emerge in the editing room?

Baghdadi: I shot for three years, from 2018 to 2021. Even before I started filming I knew the film was going to center on Lilas. She had a rawness about her, and it really felt like her music was a reflection of her inner struggle. I could not, however, predict where the story was going to lead us. I only knew that I wanted to go deeper than just a portrait of a band.

It wasn’t until about a year in that I started to learn more about the dynamic between Lilas and Shery. I had only gotten bits and pieces because it was still largely a secret, and it took time for me to gain the trust for them to feel comfortable telling me. But even then I wasn’t 100% sure that we could pull it off in the edit because by the time I started filming a lot of the important details were already backstory, and I wanted the film to feel very in the moment. I was never going to sacrifice authenticity to force a storyline; everything had to feel earned. So the structure of the film still remained to be seen.

When we first got into the edit, our editor Grace Zahrah put together a 10-hour assembly of scenes. After watching it with our supervising editor Lindsay Utz we discussed how we felt and what themes were emerging. From that moment Grace and I were on the exact same wavelength. I said to her, “This is the film I want to make, this is the story I want to tell,” and she was all in for it. I think it took about four months for Grace to assemble the first cut. Then we started testing it. And while there was still a lot of work to do, at that point we knew we had a film that was going to resonate with a lot of people. Then we spent about six more months rewriting, recutting, and fine tuning until everything was in its proper place.

Filmmaker: At what point did Animal Pictures – founded by EPs Danielle Renfrew Behrens, Natasha Lyonne and Maya Rudolph – come onboard?

Baghdadi: Animal Pictures came onboard shortly after my first shoot. In November 2018 I came back from Beirut with only five days of footage because I had gotten horrible food poisoning. At that point I knew that I could make a feature but I didn’t know how I was going to prove it. I cut together the best three-minute sample I could and showed it to a dear friend and colleague, Lysa Heslov. Lysa immediately showed it to her friend Danielle Renfrew Behrens (producer of Montage of Heck and Queen of Versailles), who happened to be starting a new company, Animal Pictures, with Natasha Lyonne and Maya Rudolph. We sat down with Natasha, Maya and Danielle and showed them the sample, and the rest is history.

I feel like this film had stardust on it from its inception. Not that it was ever easy to make, but the evolution of it all was remarkably organic from the very beginning. It’s like the story of the Sirens was meant to be told.

Filmmaker: The film depicts quite a few emotionally fraught encounters. How does everyone involved feel about the final cut?

Baghdadi: Making Sirens was only possible because of the three-and-a-half years of trust built between the band and me. All of the young women in the film are incredibly brave, but Lilas and Shery really gave a lot of themselves because they want to make a difference in the lives of young people in the region. It’s been an emotional journey, but so far I think the outcome has been cathartic and positive for everyone involved.

Filmmaker: Besides being a director and an accomplished DP you’re also an active mentor (and member of Brown Girls Doc Mafia). Does this mentorship extend to your film’s characters? Do you have a plan to bring Slave to Sirens and their music to the wider world?

Baghdadi: One hundred percent. I believe in giving back as much as you take. And mentorship is a proven method of elevating the careers of women of color.

My relationship with each of the Sirens is like that of a big sister. I love them and I want to help them achieve their dreams. They have the talent, they just need more opportunity. Recently we secured a guitar and bass endorsement with Dean Guitars. And, with their first full-length album set to be finished this spring, the goal is for the band to start meeting with record labels. It’s been a rough past few years for the music industry during the pandemic. I’m really hoping this summer we can get them out to international festivals and have some fun playing for a crowd!