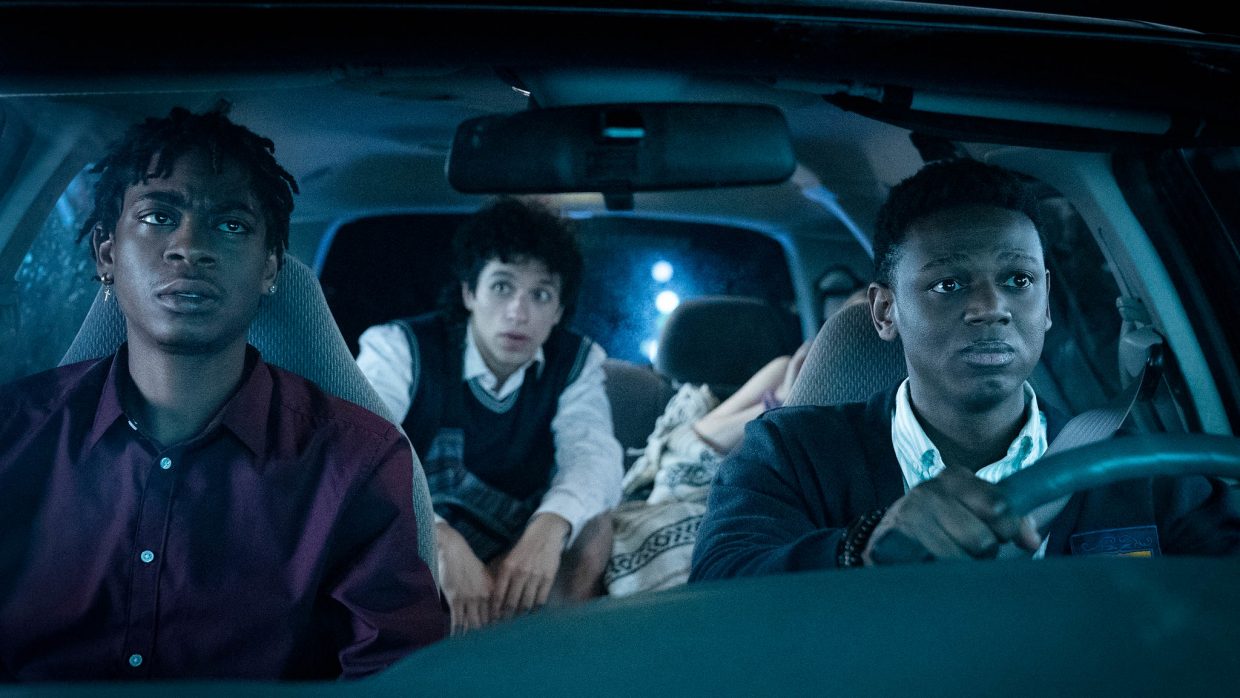 In Emergency, a dark comedy by Carey Williams, a pair of Black college students finds a white woman unconscious on their living room floor. Wary of calling the police because of the optics of the situation, they instead recruit the help of a Latino friend to help resolve the situation, unmasking the absurd racial dynamics of contemporary America in the process. Below, editor Lam T. Nguyen discusses finding comedy in the gravely serious and the difference even a few frames can make in helping a punchline land.

Nguyen: Director Carey Williams and I had just finished a feature last year, R#J, and we had built a strong chemistry together. He approached me for this project to see if I would be interested. After reading the script I called him immediately to share my excitement about the story. Although the movie touches on very sensitive topics, I expressed that the story was about these two best friends and their journey on this wild night. We shared the same views for the message of the story and I believe our synced vision to balance this story with comedy and drama in the right way landed me this opportunity.

Nguyen: The actors did such an amazing job owning these characters. There were so many great adlibs and takes that gave me some really tough choices to pick from to refine the story from the initial assembly. We did not want to lose the best heartfelt moments.

My goal for this project was keeping the balance between comedy and drama. I didn’t want to stray far from the purpose of the story if things got too funny or too dramatic. It had to feel real as we follow our characters’ experiences and to maximize the emotions of our characters when needed.

Nguyen: To achieve these goals was a total team effort. Carey and I constantly bounced ideas to improve the scenes as much as possible. We weren’t afraid to push boundaries and try various combinations. The test screenings were helpful in shaping some of our choices. It gave us an insight on what was working for the audience and what didn’t.

The comedy in particular was very surgical. Adjusting shots by just five frames or so really impacts the comedy. Timing and how fast or long you should stay on a beat are so key in getting that right. So it’s really testing your patience in going through the footage and the edit.

For the emotional parts I leaned more on the actors and allowed them to influence my cuts. For instance, the lab scene towards the end where Kunle releases all his emotions was done in one full take. I could’ve just left it at that and it would be effective; however, I knew we needed Sean’s reaction in this moment. But the question was where to cut. So, I would close my eyes and play that take. I would listen to the performance—be in the characters shoes—then hit M on the keyboard to mark where I felt like I wanted to look up. I would step away for a bit and revisit this scene and do the exercise again, and it was consistent. It was about being really delicate on when to cut away from a heavy emotional moment and when to come back, and this exercise worked for me.

Nguyen: I started on this filmmaking journey nearly 20 years ago. I was an intern for a production company in Denver working as an assistant for the behind-the-scenes editor. One day the director for that feature asked me to edit some scenes together from the film. He liked what I did, and that pretty much sparked my editing career. It was totally unexpected. He’s become a great mentor and allowed me to shadow his screenwriting process. That really helped me to become a better storyteller and editor. One of the great things in this business is the process. There’s always something new to learn for each project. I certainly embrace all the techniques from different directors, editors and producers that I worked with over the years to help influence my choices. I am grateful for that.

Nguyen: I use Adobe Premiere Pro. My first non-linear edit software was Final Cut Pro. It changed at some point over the years, which forced me to switch over to Adobe because the interface was more intuitive. The workflow between different programs in Adobe was very seamless. Adobe has advanced the software so much over the years that makes it more comfortable to work with. I don’t have to think about the technicality of the software. I can really just focus on editing.

Nguyen: I would say the most difficult scene was at Terrance’s apartment where Maddie and her friends arrived and how they almost got to Emma before the boys drove off. The challenge was bouncing back and forth between two perspectives. How do we get Maddie’s point of view of the situation, where to her it looks bad but the audience knows what’s going on? We structured the scene in so many ways that at first we were losing the punchline since Maddie’s moment was more dramatic.

We initially worked the scene in small chunks. That didn’t quite work, so what we ended up doing was focus on the boys in the apartment first, get that scene right for the comedic moment and have that work as a complete scene on its own. Then we do Maddie’s arrival and her seeing the van as another complete scene. Then we use the apartment scene as the baseline and insert Maddie’s arrival and point of view to break-up the apartment scene to make it flow. We wanted to time the moment organically where we felt like she almost got there and just missed her chance while still keeping our comedic moment. It was very rewarding when we finally found the right combination.

Nguyen: What new meaning I took out of this was the power of voice. Since the movie touches on very sensitive topics I learned that you can still voice your belief with an open mind through levity. I believe comedy helps people understand the situation better in a less aggressive way. We hope this movie stirs up a healthy conversation after the final frame.

We definitely left a lot of great scenes on the cutting room floor, but what I discovered in the footage that I did not see was during the police chase. We were able to enhance the fear and emotion with our primary characters by taking a scene that was meant for later in the story and placing it during the police chase. So the scene became more than just a police chase. It’s about what our characters was experiencing during this intense moment, and we wanted the audience to really feel that.

My final understanding of the film stayed the same from when I read the script. We knew what and how we wanted to portray these events and stayed the course with the message of the story. We hope we executed it well for our audience to embrace the message in the end, which (as Carey mentioned during our notes session) was “resilience.”