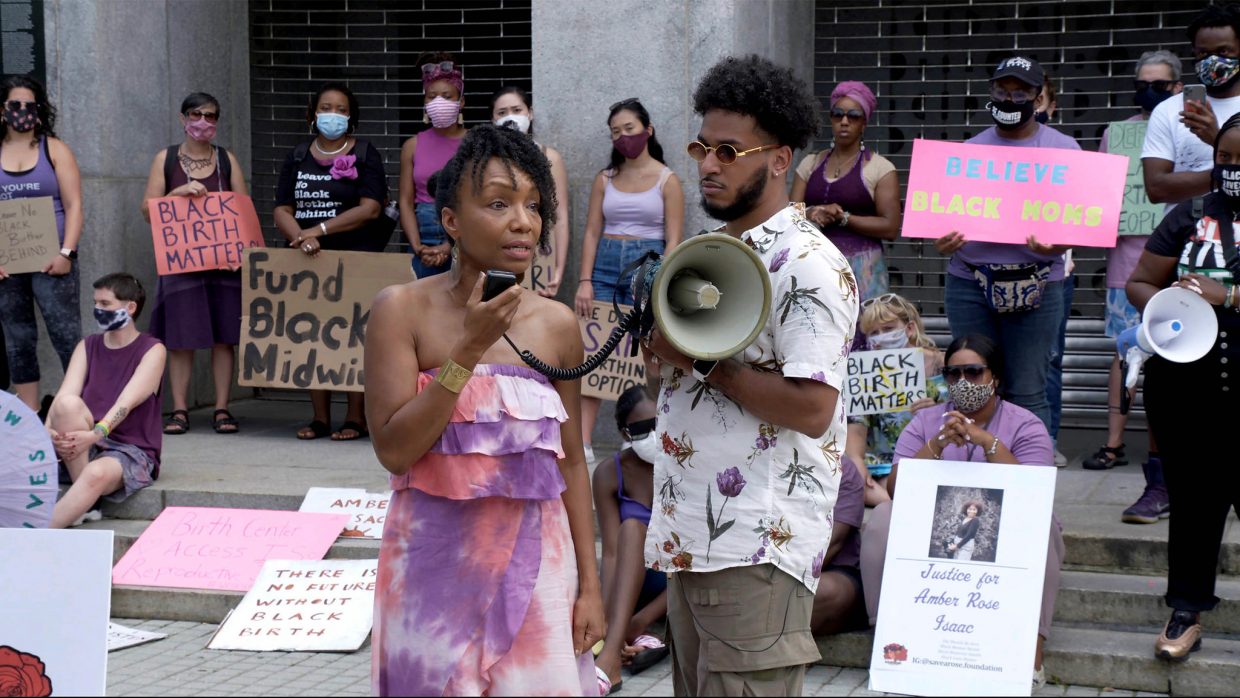 With Aftershock, Paula Eiselt and Tonya Lewis Lee turn their camera toward the crisis of the maternal mortality as it affects Black women in the United States. The film focuses on two widowers whose partners died preventable deaths during childbirth as they build support and rally for justice. Below, cinematographer Jenni Morello discusses the challenges of shooting a vérité when everyone is masked and the search for something unusual in every shot.

Morello: When directors Paula Eiselt and Tonya Lewis Lee first reached out to me about the film, it was the fall of 2019 and I was headed into doula training. There was no doubt in my mind that this was an important story to tell and I wanted to be a part of it. I had filmed quite a few documentaries surrounding maternal health and birthing practices but had been fascinated with the maternal mortality crisis in the United States since 2008, so the call felt very kismet. But when I learned I would share the work with another cinematographer, it felt like the right balance. Essential to establishing the right visual language for the film was the skill and perspective of my co-cinematographer, Kerwin Devonish. Kerwin was there from the beginning. We both brought our own complementary perspectives to the work.

Morello: Because this is a cinema vérité film that is very directly about life and death, we wanted to find moments that celebrated women reclaiming birth, even if those moments were post mortem. It was important to include certain rituals and feelings which in themselves are abstract but were important to our subjects’ lives. I wanted the cinematography to enhance the storytelling. We’d always look for something unusual in a scene, like if the light was hitting the air of incense burning or the silhouette of a pregnant person. We’d be cognizant of how precious our time is on this planet and what could be a poetic way of hinting at this.

We were interested in the power that can be felt in long shots, playing on slightly wider shots when possible to highlight the other things happening in the scenes. Finding the beauty in humans, the subtlety of touch, and hands! Hands were a thing that Paula and Tonya were really into. It became obvious to us in the middle of filming that there was a theme that started to emerge—the ways midwives talk about using their hands, how we use our hands to paint, to care for people. It became an important element that we began to watch for.

Our master interviews were filmed by Michael Crommett, and these were created with vibrancy and embracing the warmth of people’s space.

Morello: Roy DeCarava’s photographs really influenced some of the ideas for this film. The juxtaposition of lights and darks could be a metaphor for life and death—truly evocative of a sensibility. I also found myself deep-diving into people’s Instagram accounts for how they captured their own births. I wanted to incorporate some of those elements of how we embrace and portray our own beauty. We were all aware of the absence of some of our characters and wanted to find moments that could celebrate these people.

Morello: Like many, we were filming during the start of the pandemic. It was interesting to be inside people’s homes before we were vaccinated. In the early days, the biggest challenge for me was how to make a Zoom conference look visually interesting. Almost all of our shoots back then were Zoom meetings. We were always trying to reinvent the wheel. Around spring of 2021, when we were able to start filming in hospitals and in settings where people could meet in person, the challenge came in filming a vérité scene where everyone is masked. Though we could still see people’s eyes, it was incredibly hard to anticipate their moves. It felt like every shot could be a reaction or a cutaway. I definitely felt out of my comfort zone having to film scenes where I knew I might move at the wrong moment because I couldn’t see any facial movements. It really made you appreciate the artistry and elements that make vérité so fulfilling.

Morello: We started shooting on the Sony Fs7 because it was a camera our directors loved the look of, and Kerwin also owned one. We switched to the Sony Fx9 in 2020 because of its sensor and our mutual love of the Sony Venice. We used a combination of the Canon CNE 15.5-47 zoom lens and Zeiss Distagon Primes for vérité scenes (since many spaces were small apartments). The interviews were shot on the Canon Sumire Primes.

Morello: This was a vérité film, so we tried to use available light or practicals as much as possible. For our interviews, we tried to control and use light to aid in our natural environments.

Morello: There were a few difficult scenes, but the most obvious challenges were in capturing births. We had many discussions about how we wanted to approach and capture them. The timing of birth is so difficult that we often realized we wouldn’t get it the way we wanted. For example, we followed a woman from her last appointment to being induced at the hospital. We met her at the hospital at 7 am, spent hours with her, left the hospital for a while, and then sat at home for hours waiting to see if she was closer to delivering. Around 11 pm at night, she still hadn’t progressed further. We were emotionally invested in capturing this and in the end, I wasn’t the one to capture it. I had to fly out for a shoot and we hired another DP to continue waiting.

We did have a difficult yet magical scene with a group of midwifery students. Our directors really loved seeing everyone’s faces while they were talking, so we brought in a second camera for these bigger scenes. It was such a dynamic scene, where fourteen women were often talking at the same time and sharing such incredible and important knowledge. We never would have been able to cover it with one camera. Every person’s voice in this scene was important, and we were always cognizant of not altering the moments. Because our crews were always 3-4 people, having a second camera allowed us to be able to film this with the same vibrancy of our other scenes without missing any critical emotion. It was a real joy dancing around a small table documenting this very rare scene.

Morello: We shot in log, so the look was realized in the DI. Our colorist worked with us on a look that played off of the vibrancy of the colors of our subjects. We wanted the film to feel like real life and pop.