Tequila Sunrise: On the Location Shooting of Dos Estaciones 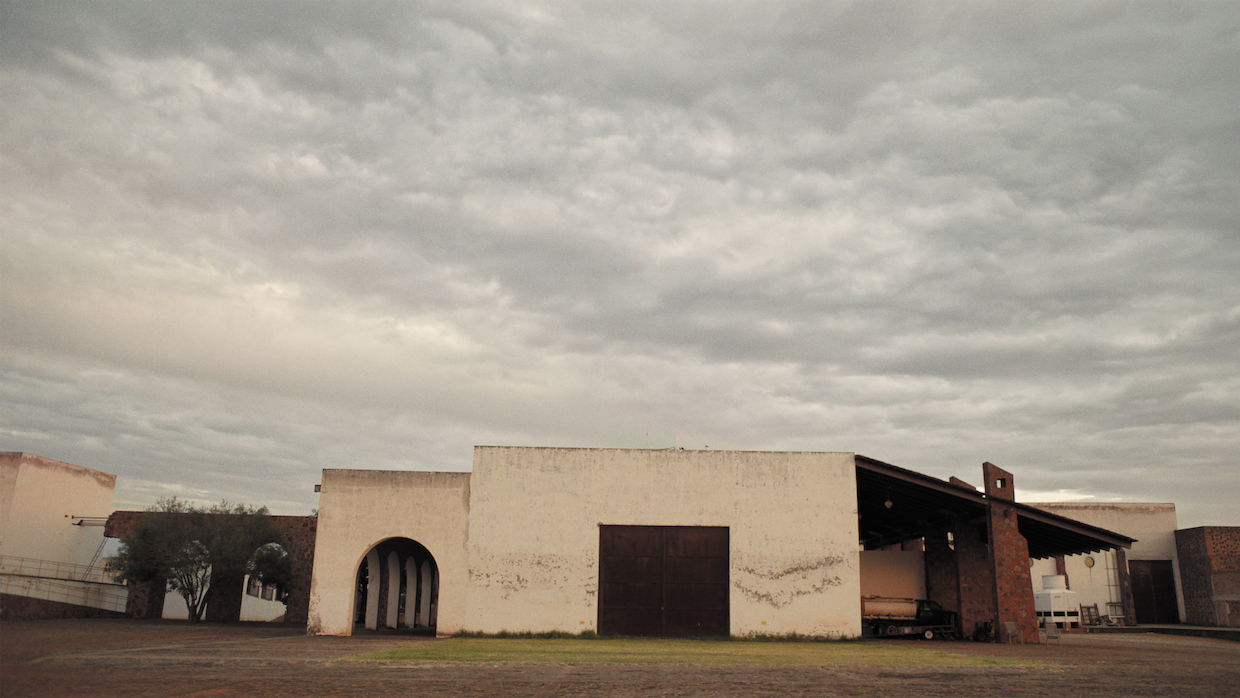 “When I first started thinking about the film, I thought about two things: the place and María’s character,” says director Juan Pablo González of his Sundance-premiering sophomore feature, Dos Estaciones. María (Teresa Sánchez) is an economically besieged tequila ranch owner in Estaciones, which expands the definition of a “one-set movie” to a square-meter extreme: Roughly 70 percent of the film was shot on González’s family’s tequila ranch, in a rural area two hours from Guadalajara, capital of the Mexican state of Jalisco.

González is from the area, where he filmed previous shorts and his first feature, Caballerango. His grandfather built a tequila manufacturing plant in downtown Atotonilco El Alto in the early 1940s, a facility long since sold to foreign corporations. He didn’t purchase the land where Dos Estaciones’s factory is located until the early 1970s when, as González recalls, “land was very cheap in this region.” Later, when González’s grandfather needed a pickup truck, he traded part of that land to his son for the vehicle; Estaciones’s factory was built on the property at the beginning of the aughts. Manufacturing stopped for two years around 2009, then resumed at the low rate of, on average, once every six months. Though work’s picked up, when Dos Estaciones began the two-month shoot that generated the bulk of the film’s footage, the production team had no idea whether any tequila would actually be produced while they were there. As producer Jamie Gonçalves recalls, “We had been going since 2017 to this factory. That was probably my seventh or eighth time there, and the first time I ever saw it operational was halfway through production. It spur-of-the-moment happened when they bought enough agave to fill two ovens.” González says, “I had given up on that scene,” the tequila-manufacturing sequence that’s one of the film’s highlights. “I felt like, ‘Well, if they don’t make the tequila, we’ll just make a film about this character that is waiting for agave, and the agave never comes.’”

That flexible approach was baked into Dos Estaciones’s initial years of development. Starting in 2017, González, his wife/co-writer Ana Isabel Fernández and co-writer/producer Ilana Coleman would perform frequent location scouts, then write in response to what they’d seen. While the bulk of the film’s taut narrative was shot during its main shoot with star Teresa Sánchez in fall 2020, important pieces of footage—including a flood that’s a crucial turning point in the plot—were captured as nonfiction in the years prior. “You can’t do that if you have to be renting a location every time you go to shoot something,” González notes. “I grew up in that space, and I know that space very well. Ilana wasn’t familiar with that space, and [the process] allowed her to live it, to understand it a lot better.” When writing alongside Fernández, who’s from the same general area, González sometimes observed them getting trapped in “the specificity of thinking about [actual] people that we knew. That sometimes took us away from the actors we were working with.” Coleman’s outsider’s gaze—she’d never seen the region before watching Caballerango—provided a fresh and necessary perspective.

The decision to make Dos Estaciones a narrative emerged slowly. Says Coleman, “I don’t know if it was conscious. We had done Caballerango and were all in documentary mode at that moment. It was just like, ‘Let’s research, write and at the same time apply for funding to do the fiction block.’ That kept going until we were like, ‘OK, we got the funding, now we need to schedule the shoot.’” Initially planned for fall 2019, that shoot was delayed first by the search for financing, then by Fernández getting pregnant. “Our own lives and the material conditions shifted things,” González recalls. “At some point, we thought, ‘If we don’t get funding from anyone, we’ll just go and just do it with a four-person crew.’ But then we got the funding, and it became something bigger.”

The main shoot finally started at the pre-vaccine pandemic moment of October 2020. That meant cutting the crew size and creating an NBA-style bubble, with the tequila facility also serving as housing for cast and crew. One of González’s brothers moved out to accommodate the team, which then settled in for four weeks of rehearsal followed by 31 shooting days. “We turned all of these rooms in the factory into bedrooms, and everyone had to share rooms with two or three people,” says Gonçalves, who shared one with DP Gerardo Guerra and assistant camera operator Leonardo Colunga. Assembling the crew was relatively easy: For many, Coleman observes, it was their first chance to be on a shoot since the pandemic started, and “they were enjoying nature outside of their apartments, so it was like an enjoyable break.” “It was really important that we had crew where we could keep an eye on them—which sounds like a prison, and it’s a little bit like that,” Gonçalves adds. “But it’s also like summer camp. And it’s also COVID.”

Inevitably, he says, the pandemic caused financial problems: “COVID probably increased our budget by 10 or 15 percent. But we weren’t prepared for that because, with Mexican government funding, you can’t get more money. You have to use the amount of money that they’ve given you to do the movie, and it comes in installments. So, we got this installment of money—that’s our production budget, and you still have to make the film from what this budget is.” But that unbroken immersion had its upsides, especially when it came to changing the schedule on the fly: the only way that was possible, Gonçalves says, “was by having the location constantly at our disposal for two months, which I think we also could have only done during COVID.”

The shoot’s flexibility comes from the team’s nonfiction background; as González says, “We didn’t know how to make fiction, so we had to make it the only way we knew, which was like documentary.” That approach, however, initially threw off members of the crew who were only used to narrative shoots: Coleman describes them as “confused,” González as “terrified.” By the end, though, they’d come around, in part because the average shooting day never went over 10 hours, a rarity for narrative Mexican productions. One veteran crew member, more experienced than the rest, struggled to adjust but eventually told Coleman, “I’ve never been treated like this on a fiction film. This is the best fiction experience that I’ve ever had.”

Reflecting on the film’s setting, González fleshes out the film’s historic landscape “in relationship to an industry that exemplifies what’s happened with this failed modernization project in Latin America—creating national industries that, with very little time, became owned by foreign corporations. That has eroded so many communities around Latin America. I was growing up while this was going on, and the idea behind this was, ‘We’re doing this so that these industries grow as Mexican industries’—that was the intention, at least discursively.

“I remember my parents talking about this and my father being like, ‘We are going to become the spears of our communities because these industries are going to grow, and they’re going to be ours.’ That was trumped by other projects the world had for Latin America, which was basically owning all these places and extracting from them. When things crashed, so many people lost jobs that when these corporations arrived and started hiring people, everybody was like, ‘Oh my God, these corporations are saving us.’ But in reality, they’re eroding the land.”