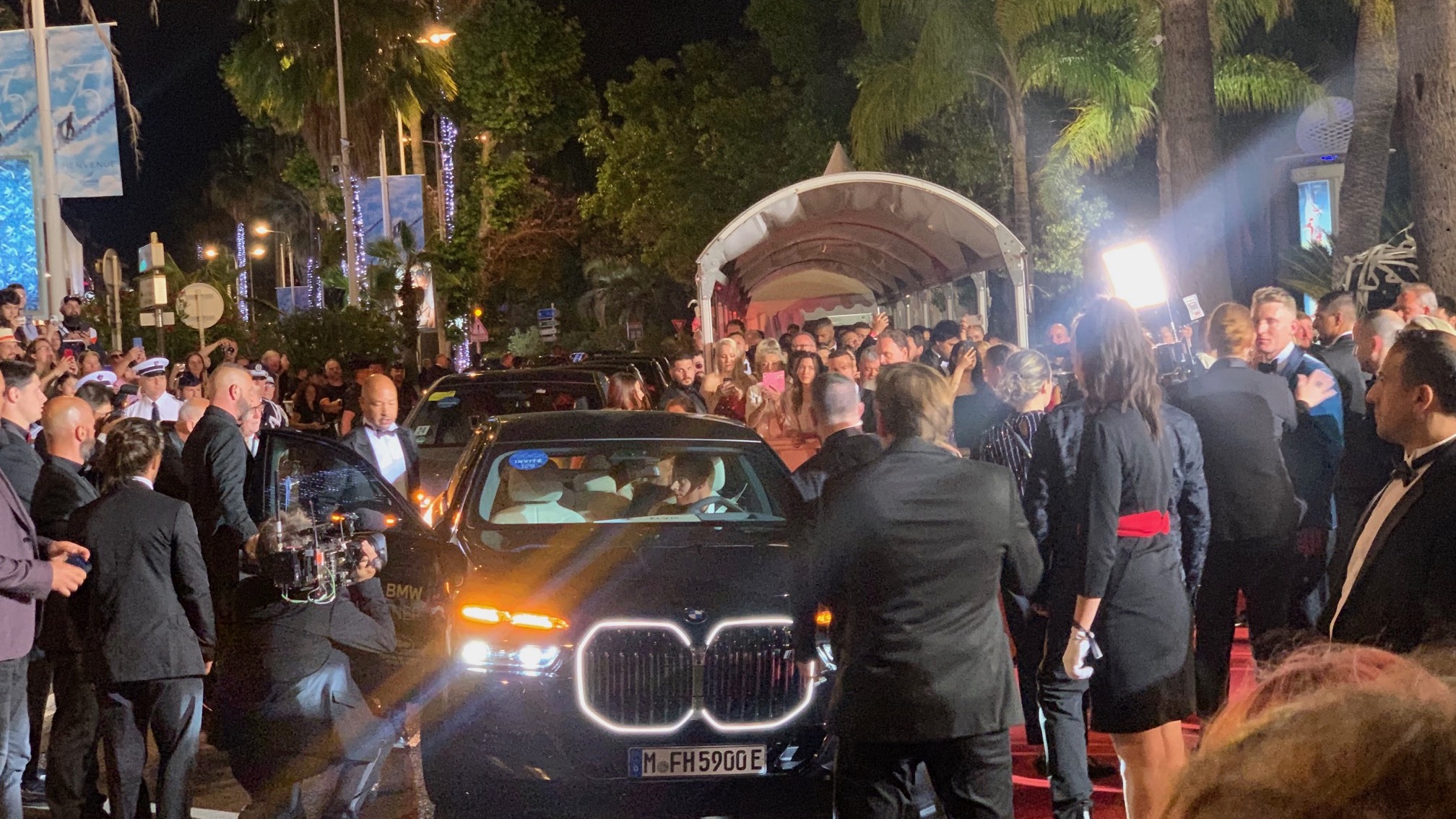 The Elvis red carpet and arrivals

Filmmaker Pepi Ginsberg is attending Cannes for the first time with her short, The Pass, in the La Cinef section. Below, she begins a diary series on her trip there. Read an interview with Ginsberg about the film here and part one of this series here. — Editor

Had a celebratory bottle of champagne with the team. It felt good to sit, take a beat, share the drink. Saw Nostalgia. Was fascinating to see Naples, I’ve never been. It was painted as some kind of inferno. The grit was palpable and exotic. Called it a night after the screening hoping to get some rest. My 16-month old daughter had other plans. Finally slept at 4:00 AM Took a Tylenol PM and nearly slept through the alarm — couldn’t miss the premiere of our film! Made it on time. Went well I think! Nerves were high. The other films were very good. Resting now, or trying, tonight we walk the red carpet! And see Claire Denis’s Stars at Noon. And maybe party because it’s time for that. And celebrate because we’re in Cannes and because my airbnb finally has internet! There will be plenty of time for sleep. This isn’t the place for it.

Morning. It’s the 26th — shocked I’ve only been here three days. Feels like a lifetime. I’m averaging five hours or less of sleep a night. Wish I could say it’s because I’m raging on a yacht, but I’ve brought my 16-month-old daughter along and the jet lag for her is very real! As are the meetings, screenings, etc. Real in the best way. Last night we walked the red carpet. I’ve honestly never seen anything like it. Anything that comes close has been on pages of magazines or, I guess, Instagram. La Cinef was set to walk the red carpet for the Claire Denis Stars at Noon premiere which, by the way, was a stunning film and my favorite so far of the festival. Before us on the carpet was Baz Luhrmann’s Elvis, an almost 3 hour movie and a red-carpet exit almost as long (relatively). We waited and waited on the sidelines by the road as fans stood on ladders hoping for autographs from the stars. To see the magnitude of ceremony and glamour up close was what I imagine it must feel like to hold an enormous diamond necklace in your hands — a sort of blinding experience. I can’t remember the name of the Elvis star – oh, Austin Butler — but he looked like a Ken doll come to life. Under the bright lights he was unreal next to Baz Luhrmann, who was his own kind of Barbie daddy, smiling as in a permanent state of beatific grace.

I waited to walk in my alphabetical spot with my fellow filmmakers and watched a starlet in a flowing green dress, blinded and completely sucked in to the paparazzi’s glare. She could have been from any era, standing on the red carpet until the very last moment when she finally got in her car. I watched her pull away in her green sheer gown, a thousand-yard stare. I could have been watching a studio star from the ’30s, her dispassion and her beauty were hard to turn away from. The faces of stars aren’t like normal beautiful faces, they look like they were constructed in a lab perfectly tailored to the ideals of beauty that conjure aspirational longing. I’ve never seen it up close. I don’t know what to make of it.

Stars at Noon was really beautiful. I love Claire Denis — seeing her like a small angel with her silver halo of hair walk into the theater, her determined look, always something behind her eyes, her actors behind her, was thrilling. She’s a hero, a hero who, at 76, hasn’t been in the Cannes Competition for 30 years. (I have to say they need more women in competition.) Her film, for me, was one of the strongest I’ve seen of the recent Denis films. Joe Alwyn is a star and Margaret Quailey brought it. What a face. The political thriller that took place in Nicaragua did not disappoint — it was weird but just my kind of thing.

I’m headed to a breakfast meeting with some programmers, met some really lovely people at a party last night that spilled into the street, luckily, since I was too late to enter. Another blurry Cannes day. More shorts to see. A wonderful serendipitous meeting with some fine folks — just my speed. One more big day tomorrow. This is a serious blast.