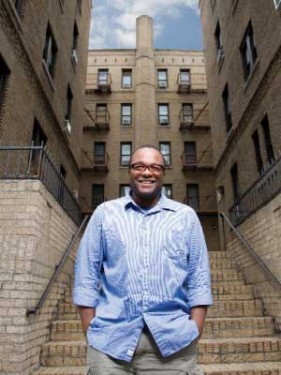 One of my favorite short films of the last few years is Moon Molson’s Pop Foul. I loved it so much I put Moon in our “25 New Faces” list of 2007. Wrote Brandon Harris, “Short films are rarely as devastating as Pop Foul, the lyrically mounted, subtly acted debut of Columbia University’s Moon Molson. The film tells the tale of a confused young boy who struggles with his reaction to a beating his father endures at the hands of a local thug following a Little League baseball game. Pop Foul stingingly depicts the emotional violence that follows the physical as the young father enlists the boy to deceive his mother about the incident in order to retain the remaining fragments of his shattered masculinity.”

If you want to see the first 10-minutes of Pop Foul (which I’m not sure I recommend, because you won’t get to its shattering conclusion), you can check out Molson’s Kickstarter page, where he’s raising money for a new project. The new film is a short, Crazy Beats Strong Every Time, and Molson is looking for $8,000 for two more days of shooting and various other expenses. Here’s what he writes about the project:

One night, after returning to the New Jersey projects with a crew of his friends, MARKEES, an African-American twenty-something, finds a drunken African man passed out in his building hallway. After ridiculing the man, the young men realize that the he is actually KOFO, Markees’s Nigerian-immigrant stepfather. Motivated by shame and the restraining order his mother has placed on his stepfather, Markees drags the unconscious man into his car in order to find him a more suitable place to sleep. But as the night dwindles on, the young men become increasingly aware of the futility of unloading the stepfather. Tensions build and frustrations mount, forcing the situation toward a violent end. Can Markees reject the pressures of urban machismo and his own youthful pride before someone actually gets hurt?

Check out the page and consider supporting Moon on what I’m sure will be a great short.