“We Often Speak of the Film as a ‘Making-of-a-Ghost’ Story”: Saela Davis and Anna Rose Holmer on God’s Creatures 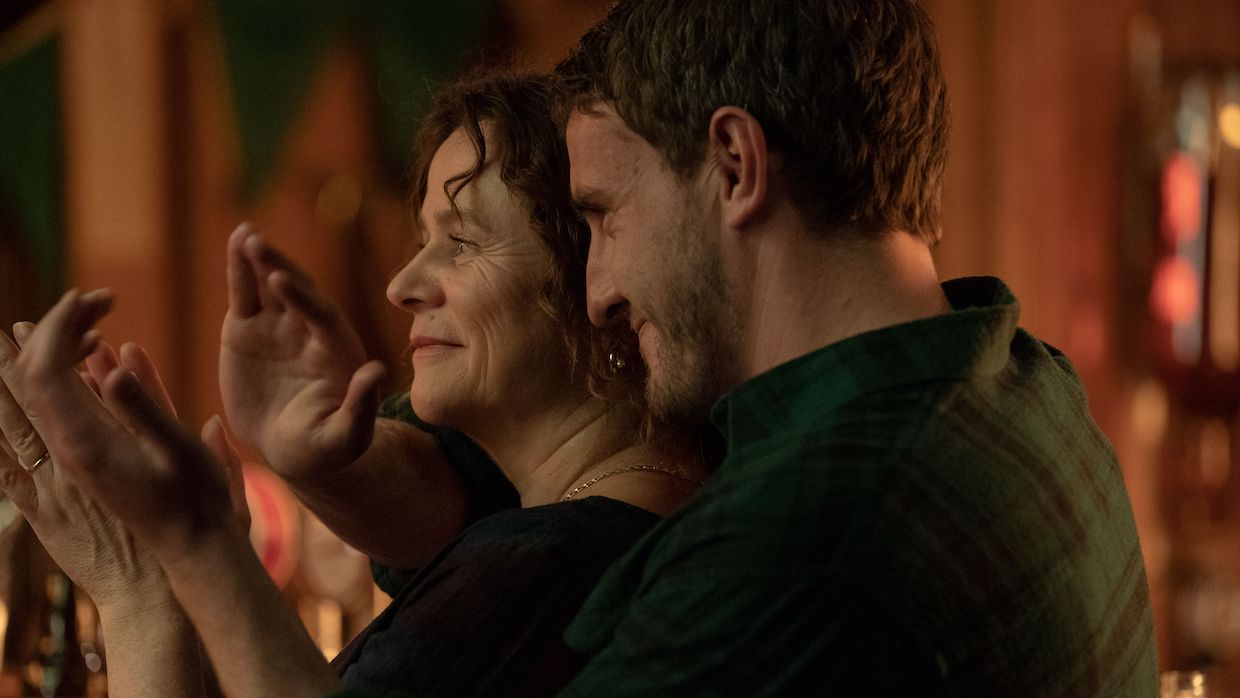 by Natalia Keogan
in Director Interviews
on Sep 29, 2022

The brackish waves of the Atlantic are a source of livelihood and peril for the inhabitants of a coastal Irish fishing village in God’s Creatures, the directorial work of Saela Davis and Anna Rose Holmer. Aileen O’Hara (Emily Watson) is the manager of a local fishing plant, tasked with sifting through daily catches of oysters and haddock on a whirring conveyor belt and preparing them for market. She is diligent yet warm, providing a maternal presence for many of her employees, namely young Sarah (Aisling Franciosi, The Nightingale).

During an ordinary shift, Aileen and a handful of other employees witness a tragedy: The body of a twenty-something fisherman washes ashore, drowned as a result of the archaic tradition that bars parents from teaching their children how to swim. (The rationale is, essentially, that those who don’t know how to swim are dissuaded from jumping into choppy, frigid waters to save those who fall overboard.) During the young man’s funeral, Aileen’s estranged son Brian (Paul Mescal) unexpectedly arrives, returning from an extended expedition to Australia. While the reunion between mother and son is initially tender, the enabling toxicity inherent to their relationship rears its ugly head when Sarah accuses Brian of raping her as she walked home from the town tavern shortly after his return. Paralyzed by denial, Aileen alleges that her son was in her company for the duration of that evening, sullying Sarah’s journey for justice.

Davis and Holmer previously collaborated on the 2015 film The Fits, which Holmer directed based on a story by Davis, Holmer and collaborator/producer Lisa Kjerulff. Davis also served as the film’s editor, while Holmer undertook the finer screenwriting process and also produced. The film explores a Cincinatti dance troupe that begins to suffer from unexplained seizures that claim each adolescent dancer one by one. While The Fits and God’s Creatures both contain unnerving, quasi-supernatural elements, God’s Creatures remains grounded in the observation that the subjugation and violation of women’s bodies is upheld by the very tenets of our society—oftentimes, even abetted by fellow women.

Filmmaker spoke with Davis and Holmer via email, discussing the directing duo’s “technical foundations,” the decision to shoot their latest film on 35mm and the experience of working with acclaimed English actress Emily Watson. Unless otherwise noted, their answers were written together.

God’s Creatures will be released theatrically by A24 this Friday, September 30.

Filmmaker: Both of you, along with co-writer Lisa Kjerulff, wrote the script for Anna’s directorial debut The Fits in 2015. Yet on God’s Creatures, which you directed together, you are helming a film based on a screenplay by Shane Crowley. What was it like taking a step back from shaping the film’s narrative, focusing instead on bringing someone else’s story to life?

SD & ARH: Shane’s writing is beautifully poetic and gives you an authentic sense of people and place. From our first read, the story resonated with us in profound and personal ways. Together we shaped the script for two and a half years, developing it alongside Shane and our producer Fodhla Cronin O’Reilly. It was an exciting and creatively fulfilling process which blossomed into the film that lives in the world today.

Filmmaker: In the past, you’ve both worked in different capacities within the film landscape. Anna, you were mostly a cinematographer and producer, while Saela comes from an editing background. Do either of you find that your previous work in these fields aids your current directorial projects in any particular way?

SD: Over the years, I’ve practiced memorizing the structure of a film scene to scene in order to think through ideas when I’m not in front of the computer. I found this was helpful while directing, as you often need to make changes or cut shots during production. Having the mental map of the script, which is like a rough cut in my mind, makes it clear what moments are indispensable or even what shots we might be missing while on set. Also, I encourage us to hold on the end of a take for far longer than might be normal. There’s been so many times in the edit when I wished there was an extra breath or a few more frames. Those seemingly inconsequential beats have the ability to impact the entire emotionality of a scene when it’s edited together.

ARH: It’s wonderful to have a technical foundation, because it enables me to start thinking about the role of the camera at the script stage. Aspect ratio, format, lensing, focus, lighting, movement, framing, color—these all become emotional tools in our storytelling. Having the vocabulary to direct the camera allows for stronger collaborations across the board. But more than anything, working in service of another director’s vision taught me to try and be a leader I would want to work with as a crew member. To remember that your set is a beautiful collection of human beings—artists, laborers, craftspeople—who are all critical and important in their own unique ways. Saela and I aim to run a set with compassion and humility.

Filmmaker: The cinematography is totally engrossing, capturing this Irish seaside town in a way that isn’t completely drab considering the characteristically dreary weather. How did you work with DP Chayse Irvin to capture the greens, blues and grays of the landscape without leaning into over-saturation?

SD & ARH: Our conversations with Chayse revolved a lot around tone and color. We set out to create an epic, tense and foreboding mood that was simultaneously vibrant and rich. The decision to photograph God’s Creatures on 35mm was in part in order to capture the intensity of our landscapes without muting them. We discussed films like Wim Wenders’ The American Friend and Andrey Zvyagintsev’s Elena and Leviathan. These films allow for stylization and naturalism to blend together in an authentic yet authored way. Chayse is a master at this delicate balance. The color story of our film is also alive in the work of production designer Inbal Weinberg and our costume designers Joan Bergin and Lara Campbell, who worked closely with Chayse to bring that palette of saturated hues to our interior sets and wardrobe.

Filmmaker: The cast is small but mighty, with Emily Watson carrying much of the film’s emotional throughline. She has amazing chemistry with Irish actors Paul Mescal and Aisling Franciosi, her London roots never betrayed by her convincing Irish accent. To say the least, it’s a bit controversial to cast an English actor in an Irish role. What made her stand out as the perfect person to play Aileen O’Hara?

SD & ARH: We were particularly drawn to the vulnerability at the heart of Emily Watson’s performances over her career. We’ve marveled at her artistic instinct toward embodying rather than just doing, a rare and mesmerizing quality that’s created an enduring body of work. For Aileen, we needed an actor who could illuminate her interiority with strength and curiosity. It was a joy to collaborate with Emily to bring Aileen to life.

Filmmaker: The film has a pronounced gothic element, from the ghostly whispers of the wind to archaic traditions that lead to untimely drownings. It also feels haunted by generations of women who have had their voices silenced, their bodies violated and their abusers walk free. Yet it’s a fellow woman who stands in the way of a rapist being convicted in God’s Creatures. Can you speak indirectly to how this eerie gothic element eventually turns Aileen’s transgression into a darkly redemptive act of solidarity?

SD & ARH: We often speak of the film as a “making-of-a-ghost” story. It is also not a stretch to say that what Sarah experiences is a “living nightmare” or simply a “horror.” We felt that in order to portray the emotional truths in this story we could cinematically express them with eerie, unsettling, gothic elements through the use of camera, sound design and music. Together, these elements all carry Aileen toward metamorphosis. However, as we see it, Aileen’s actions don’t bring about redemption nor justice. It isn’t until Aileen sits and listens to Sarah’s words that she is acting in true solidarity.