“Stories That Need to Be Told”: Elwira Niewiera and Piotr Rosołowski on Ukrainian Documentary The Hamlet Syndrome 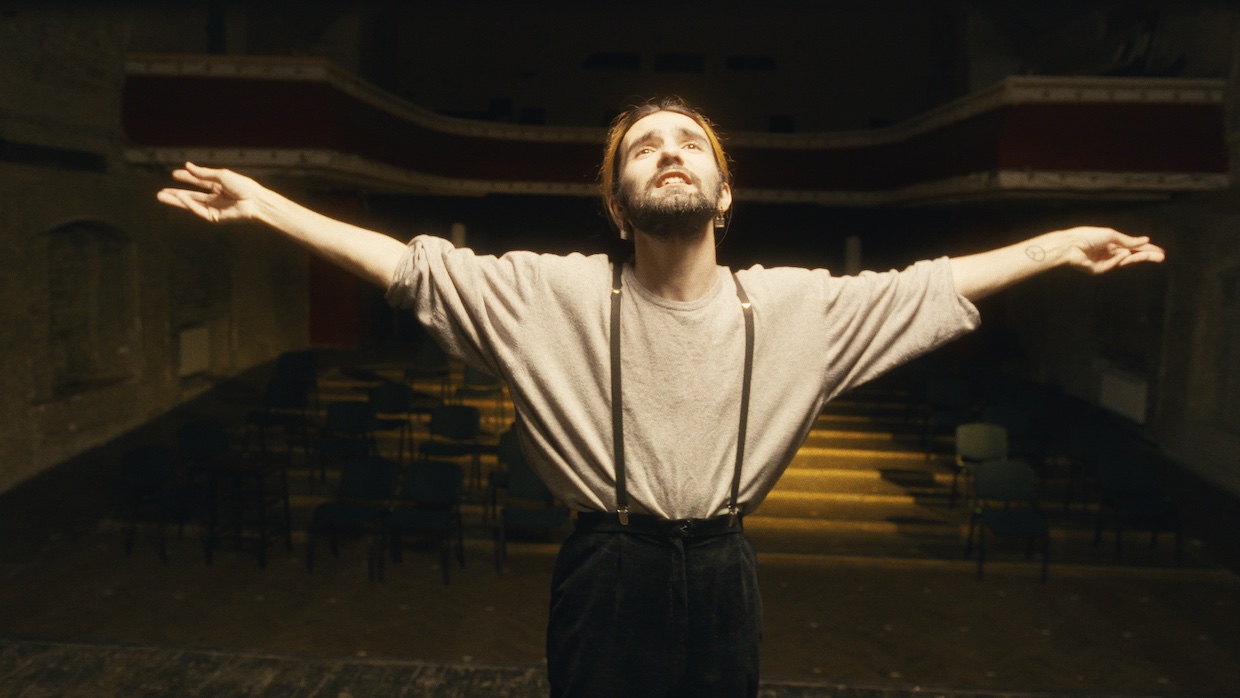 by Lauren Wissot
in Directors, Interviews
on Nov 15, 2022

One of the more unusual projects to play this year’s DOC NYC (also concurrently screening at IDFA in the Best of Fests section), Elwira Niewiera and Piotr Rosołowski’s The Hamlet Syndrome follows five young men and women as they develop an experimental stage piece based on Shakespeare’s tragedy—as well as their own. The quintet questioning “to be or not to be” are all Ukrainians who have been engaged, to varying degrees, in the war Russia launched back in 2014. (This theater-as-therapy session even predated Putin’s full-scale invasion by several months.)

Soldiers Slavik and Katya, along with paramedic Roman, all saw direct conflict. Meanwhile, Rodion, a stylist from Donbas, and Oxana, who’s conflicted about her acting opportunities abroad, bear their own individual psychological scars. Indeed, the latter two also seem to be battling personal wars internally. Having fled his homophobic hometown, Rodion now finds himself increasingly fed up with cosmopolitan liberals, who collectively celebrate the queer community as heroes. “Make this a country where we don’t have to be heroes!” he rages in one powerful monologue. Likewise, Oxana seems resentful of skin-deep groupthink, suffocated by the nationalism that war inevitably inspires. “There is no freedom, only responsibility,” she laments. Whose definition of freedom are these patriotic players actually fighting for?

To learn all about shooting an existential drama in the middle of a hot war, Filmmaker reached out to the Polish directing duo (2017’s The Prince and the Dybbuk, 2014’s Domino Effect)—one of whom was selected for the Creative Culture Artist-in-Residence at the Jacob Burns Film Center—just prior to their film’s November 12 DOC NYC (and IDFA) debut.

Filmmaker: How did this project originate? Was everyone always onboard, or did you have to slowly build up trust with your characters?

Rosołowski: It was clear to us from the beginning that we didn’t want to make a journalistic film. We didn’t want to record interviews with our protagonists in which they would talk about their experiences during the [Maidan] revolution and the war in Donbas. Therefore, we took on the challenge of creating a theatrical play based on elements of Hamlet, in which the participants could address the traumatic events of recent years. We initiated the theater performance to observe the rehearsal process with the camera.

Niewiera: The process of finding the cast took almost two years. We met about 80 young, socially active people who formed volunteer battalions, organized humanitarian aid or were forced to flee from Donbas. Many of them went through the hell of war, facing trauma and trying to find their place in life.

At that stage of the film’s development, we already knew that we wanted our characters to participate in the film and play. We wanted to create a situation in which our characters, on a theater stage, could go through a process of reflecting on what they had experienced in recent years. However, many of the people we met were not emotionally ready for such a task. It took us a long time to find a team that had undergone therapy and could return to their war experiences onstage. Our characters all had different motivations for participating in the film and play. Still, all of them, without exception, wanted the world to know about what they’d experienced in the war as soldiers they never wanted to be!

Filmmaker: In addition to filming the rehearsals for the play you also delve a bit into the actors’s own real lives. What boundaries were set? Considering you’re shooting with people skilled at playing to an audience, did this present a challenge?

Niewiera: Not all of our protagonists are professional actors. Only Oxana and Roman had experience playing on a theater stage for an audience. However, I want to stress that The Hamlet Syndrome is not a film about acting or performing; this was never our focus. The intense theater rehearsals encourage our protagonists to confront past and present traumas head-on, digging deep into wounds that had not yet fully healed to craft narratives of truth out of their pain. In this case, the stage is just a neutral ground for personal reckoning. So, we didn’t set any boundaries. We wanted to follow with the camera the intimate process of revealing the trauma in the theater, and also offstage in their private life.

Rosołowski: Our goal was to name the marks that war makes on people, and how hard it is to return to normality afterward. Learning to deal with trauma is often survival; it takes a lot of energy to stay upright and continue with life. In this context, the only boundaries set by our protagonists were how far they were ready to dig into their memories. It’s also worth mentioning that all of the actors underwent therapy before their involvement in the play and the film.

Filmmaker: How involved was the troupe in the actual filmmaking process? Was The Hamlet Syndrome developed collaboratively like the play itself?

Niewiera: We initiated the creation of the play and the framework for it, but from the very beginning it was clear that the theater play and the documentary film would become two separate projects in the end. We built trust with our protagonists long before we were onstage with the camera during the rehearsal process. Thanks to that, we could make such an intimate and emotional film.

Rosołowski: On the other hand, the troupe was very much involved in the creative process of the theater performance H-Effect by Roza Sarkisian. The script was created during rehearsals based on stories shared by our protagonists. They all are listed in the credits as co-writers of the play.

Filmmaker: You shot The Hamlet Syndrome a few months before Russia’s full-scale invasion of Ukraine, and now all your protagonists have returned to the fight in various ways once again. Has this new tragic reality changed how you and/or your characters view the film? Is it now a contribution to the war effort in some way?

Niewiera: The Russian invasion on the 24th of February changed everything. On the one hand, Katya, Slavik and Roman are in hell again, fighting for their country and for freedom. Watching the film now, with the knowledge that three of the play’s cast members are back on the frontline, is really heartbreaking. You can’t be passive in this situation. From the very first day of the war, we’ve been organizing medical and humanitarian aid, which is sent directly to the units of our protagonists.

Our film now plays an important role in keeping the debate going regarding the impact the war has had on the Ukrainian people. The world’s engagement at the beginning of the invasion was tremendous, and now interest in Ukraine is slowly decreasing.

Rosołowski: Not all of our protagonists have had the chance to see the film. Slavik did, and after the screening he said that even though the shooting finished just one year ago, the film feels like a document from a different time and reality. That’s totally true, because you can’t separate our movie from the actual dramatic situation in Ukraine. This weekend there will be a Ukrainian premiere of the film in Kyiv, and further screenings a few weeks later in Lviv, which we are going to attend.

Filmmaker: I was quite surprised to learn that the project you’re developing through Elwira’s artist residency at the Jacob Burns Film Center is actually your first narrative film, about a real-life transgender heroine of the Solidarity movement who was basically written out of Polish history. As veteran documentarians, why turn to fiction now?

Niewiera: As filmmakers we believe that there are stories that need to be told. In our opinion, cinema is not a way to escape reality, but on the contrary a powerful tool for presenting our reality with all its dark sides. That’s why we are making films.

With The Hamlet Syndrome we were interested in the fate of the young Ukrainian generation, the first born in a free and independent Ukraine and shaped by the Maidan revolution. In the same way, we are fascinated now with the life story of Eva, who struggled against the communist regime in the ’70s and ’80s. When Poland became independent, our character began to fight for her true identity, underwent a sex change operation and became a woman. From that moment on, she was erased from her family and Poland’s history, pushed out into the margins. Her fate is tragic, but also symbolic of the unfinished transformation of Polish society after the end of the communist regime. You can’t really show her story’s full potential in a documentary film. We needed to switch to fiction to make it happen.