“TAKING ON THE KENNEDYS” AT STRANGER THAN FICTION

by Mary Anderson Casavant
in Filmmaking
on Oct 27, 2010 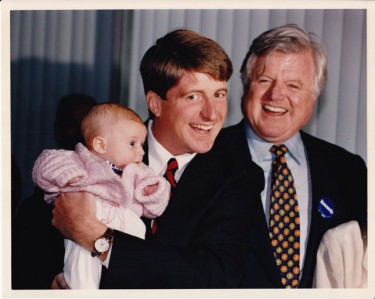 Ever since the great documentarian Robert Drew turned his camera on then Presidential candidate John F. Kennedy in the 1960 documentary, Primary, the campaign film has been one of the great genres of documentary filmmaking. So, it was no small compliment to director  Josh Seftel when Thom Powers introduced Seftel’s 1996 film Taking on the Kennedys as “one of the great campaign documentaries” at Stranger than Fiction last night.

Made when Seftel was only twenty-six years old, Taking on the Kennedys follows the Republican doctor Kevin Vigilante as he runs for Congress against Patrick Kennedy, Ted Kennedy’s youngest son. Despite the fact that Seftel was (and still is) a self-described liberal, it’s a balanced film, one sympathetic to both candidates.

Determined to run a clean campaign, Vigilante finds himself between a rock and hard place when Patrick’s team starts playing very, very dirty. Sticking close to Vigilante’s side, Seftel manages to capture the awkward comedy of the campaign season — including the befuddled look on Vigilante’s face when he stumbles Kennedy bad mouthing him to the press.

Vigilante’s shock that the political process lacks integrity is perhaps even more endearing than it must have been at the time. During this rather harrowing political season, it’s hard not to feel nostalgic for a time when there was a politician naive enough to think he could play it clean until Election Day.

Taking on the Kennedys is available on Netflix and will re-air on PBS this fall. I spoke to Seftel before the screening.

Filmmaker: How did you first get involved with this projected?

Seftel: I had made a film, a documentary, about Romanian orphanages, abandoned children in Romania. Through the process of that I met Kevin Vigilante. When I heard he was running for Congress, I thought I should call him and see if he needs any help on his campaign. So I called him, and he said there’s something I need to tell you I’m a Republican. I was shocked because I always thought he was a Democrat based on his social activism. I didn’t want to help him with his campaign because I’m not a Republican but I thought it’d be cool to document his process, and he said sure.

Filmmaker: You’ve called yourself a liberal. Going into the film, what were your feelings about the family, and did this change over time?

Seftel: I had definitely a romantic idea of the Kennedys, you know, Camelot and JFK… My view changed during the making of the film. It became much more practical. I gained respect for them. I was so impressed with the tactical approach they used to win. They always did what they had to do. Its just part of politics. I hadn’t thought about that part in the past.

Filmmaker: Since making this film as a one-man band, you’ve done a lot of different kinds of filmmaking, including directing War, Inc. with John Cusack. What’s different about filming as a one-person team?

Seftel: It’s such an intimate experience to just be a fly on the wall, literally, one person with a camera. It changes everything. I truly became invisible at times and that allows for incredible moments of truth to occur. Not only did I feel invisible, but I also wanted to be invisible because it’s so weird and awkward when people are yelling at each other or they make a huge mistake. Things like that were sort of so painful to watch. There’s also nothing uglier than a political campaign.

Filmmaker: Did seeing how the sausage got made turn you off politics?

Seftel: It definitely didn’t turn me off of that, but it convinced me to never have to run for public office after seeing what candidates go through.

Filmmaker: The most compelling character to me is actually Vigilante’s girlfriend, who provides a very candid running commentary. When you were filming did you know that she’d play such a big role?

Seftel: Well, actually what happened was that initially I had a lot of access to Kevin Vigilante and as the campaign progressed, he got more and more stressed and more and more cautious. Over time, my access to Kevin dwindled a bit, and I found that Sonia (the girlfriend) was very comfortable talking about what was going on and how Kevin was feeling. That proved invaluable to me because gave me insight into what was happening to Kevin in a way he couldn’t do.

Filmmaker: Do you think the film still holds up?

Seftel: I think it holds up in the sense that the film was really a microcosm of how campaigns are won and lost and things haven’t really changed. Campaigns are happening right now that are no different than what happened then and it’s still sort of ugly and sort of flawed. The guy who did the advertisements for Patrick Kennedy in ’94 was David Axelrod, who was Obama’s guy in 2008. He knew how to win.