“THE NIGHT OF THE HUNTER” RELEASED ON CRITERION BLU-RAY

One of my favorite movies of all time, Charles Laughton’s The Night of the Hunter, has been released on Blu-Ray and SD by Criterion today. Here’s a piece I wrote back in 2001 on the film in the context of a review of Simon Callow’s BFI monograph. 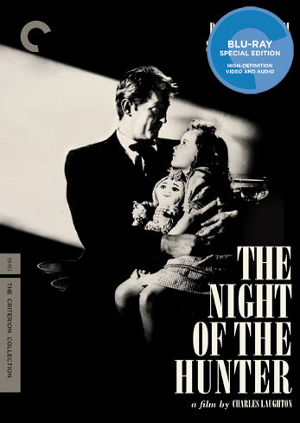 François Truffaut queasily likened The Night of the Hunter, actor Charles Laughton’s 1955 directorial debut, to a “horrifying news item retold by small children.” Quoted in Simon Callow’s new British Film Institute monograph on the film, Truffaut goes on to offer a bit of middlebrow advice proving that the confluence of film criticism and box-office commentary is not solely a turn-of-the-century phenomenon: “Screenplays such as this are not the way to launch your career as a Hollywood director. The film runs counter to the rules of commercialism … it will probably be Laughton’s single experience as a director.”

Indeed, Laughton’s use of an Expressionist, theatrical mise en scene and flashes of burlesque humor to adapt David Grubbs’s best-selling blend of Southern Gothic and Grimms’s fairy tales resulted in newspaper attacks on the film’s “arty” direction. The reviews weren’t all bad but enough were; depressed and unfinanceable as a director, Laughton soon abandoned his planned adaptation of Norman Mailer’s The Naked and the Dead. Lack of critical support on its release coupled with Laughton’s retreat from film directing resulted in The Night of the Hunter’s peripatetic status within the Great Films canon. It’s the kind of glorious one-off that falls to the footnotes of film histories, even if it’s also the sort of masterpiece that other directors spend a career working up to.

Today the film’s influence remains scattershot. Although the LOVE/HATE tattoos on star Robert Mitchum’s hands are quoted in Do the Right Thing and Scorsese’s Cape Fear, the influence of Laughton’s Manichean children’s odyssey only occasionally pops up in films, such as Bernard Rose’s Paperhouse and, especially, the work of David Lynch in Blue Velvet and Twin Peaks. The film’s greatest influence may have been in the theater; The Night of the Hunter’s classic nighttime river ride sequence – with frogs and lizards foregrounded by d.p. Stanley Cortez’s diopter shots while a small boat containing the two fleeing children edges downstream in the background, all as Mitchum’s sinisterly sung spirituals echo in the air – presages the visual tableaus of the experimental theater and opera director Robert Wilson.

In fact, Truffaut’s peculiar description of the film may hold the key to both its enduring fascination for cineastes as well as its lack of mainstream appeal. With Disney, and later Spielberg, popularizing a totally secular and socialized children’s fable, The Night of the Hunter’s serial murders, attack on religious fundamentalism and depiction of a child’s discovery of grace wrests something challenging from the genre. 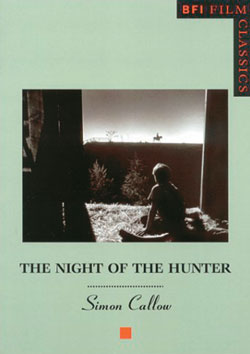 Callow, a British actor who previously penned a biography of Laughton, dutifully runs through the film’s colorful production and pre-production in this latest volume in the BFI series. He describes Laughton’s attempts to find a visual correlate to Grubbs’s free-flowing prose and the director’s struggle to get a workable script from alcoholic screenwriter James Agee. (After turning in a 350-page draft, his script was largely rewritten by Laughton.) In a too-short section on the film’s shooting, Callow details Cortez’s studio lensing of some of the film’s most striking set pieces and, in general terms, Laughton’s success at working with his various collaborators. If Callow’s somewhat stuffy book can be said to have a thesis, then this latter point is it. (First sentence: “Of all the collaborative arts, film is the most complex, owing the most to the greatest number of people, a river into which many streams flow.” Uh, okay.) And although one might come away from this text desiring a hipper take on the film, such is the value of The Night of the Hunter that Callow’s last line really does say it all: “Laughton’s failure to make another film is a serious loss to the history of the movies, but his one masterpiece continues to inspire those who share his sense of the expressive possibilities of the medium.”