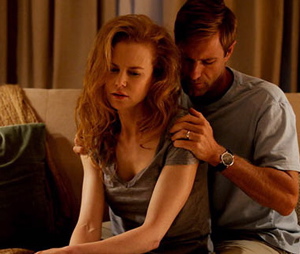 
David Lindsay-Abaire’s Pulitzer Prize winning play Rabbit Hole might seem like an odd choice for helmer John Cameron Mitchell, a director whose reputation wasn’t gained built on tasteful, upper-middle-class family dramas. Perhaps he’s mellowed, and given the results, why not? The film’s story of parental grief, that of a Westchester County couple (Aaron Eckhart and Nicole Kidman) who, eight months later still lack the emotional wherewithal to deal with the accidental death of their young son, may seem like the stuff of so many Lifetime Channel weepies. But in the hands of this 47-year-old writer, actor and director, it’s a surprisingly understated and buoyant glimpse at the aftermath of personal tragedy. Shirking off the baroque directorial flourishes of Hedwig and the Angry Itch (2001) and the untethered, sexually adventurous performances of Shortbus (2006), Mitchell takes a headlong dive into movie star corralling in Rabbit Hole, and in the process elicits a surprisingly dexterous performance from Kidman and fascinating supporting turns from Sandra Oh and Dianne Wiest.

An army brat turned musical-theater wunderkind, Mitchell studied at Northwestern’s theater school in the early to mid ’80s before cutting his teeth in the Chicago theater world and network television as an actor. He won an Obie for the stage version of Hedwig in 1998, before hatching a film version three years later that won him Sundance’s best director prize and a Golden Globe nomination. He quickly became a cause célèbre, a new standard bearer for indie cinema’s transgender niche, a notion that was broadened by his even more provocative follow up, Short Bus. While his newest project will surely lead to yet another reevaluation of this gifted and beguiling stage dynamo-turned-auteur, a strong throughline of personal storytelling and project-driven aesthetic choices have quickly become his calling cards. 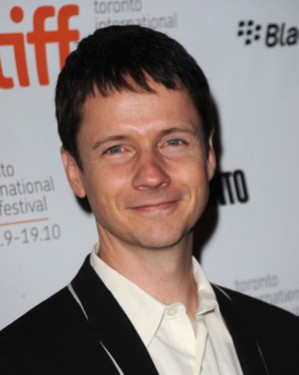 Filmmaker: When, if ever, did you see Rabbit Hole on stage? Did you see making this film as an opportunity to return to your roots in theater?

Mitchell: Funny thing, I hadn’t seen the play before I read the screenplay. The screenplay felt so cinematic and so subtle. Sometimes plays overstate everything. So many stage adaptations use words more than they should. It was a surprise when I saw the play on tape because I felt the screenplay was about 50% better. All these characters that are hinted at in the stage version end up playing vital roles in the film. Sandra Oh’s character, the whole parallel affairs that are almost happening, the prom scene, the group-therapy scenes, the supermarket scene, the selling-the-house scene, Nicole’s character stalking the boy (in the play the boy comes to her)…. All of these active, rich scenes are not in the play. I was in such awe of David Lindsay-Abaire, but usually the writer doesn’t have the objectivity to adapt his own piece. Of course I did, with Hedwig, because I was bored with the stage.

Filmmaker: Did you work closely with David to shape the screenplay after you came onboard or did you film something that was largely unchanged from that initial script you read?

Mitchell: I read what was the second draft. He had developed that with Nicole’s company. I thought it was extremely strong structurally. I encouraged him to cut maybe five percent of the dialogue. I could see that there was some repetition, I could imagine that a single shot of Nicole could replace a few lines. There was a subplot with the sister that I encouraged him to completely cut, but he didn’t. He pared it down and then I pared it down even more in editing. I encouraged him to expand the metaphor of the comic book. Later in editing, the producers wanted more breathers between scenes, which was a good idea. I came up with this device of the kid slowly building his image of the parallel universes. So it was very judicious — laser beam suggestions of cuts, most of which he took, some of which he didn’t. Others, we did while shooting and editing. He put back some things that I thought should have been cut. He was right about some things that I acknowledged later. I said, “You know what, you’re right to have this scene of Aaron breaking down with the dog.” I thought that it was a bit maudlin, but it actually allows you a window into his character that his angry scene don’t. I suggested something as tiny as cutting the last line of the screenplay, which was also the last line of the play, which was, “We’ll figure it out.” I was like, “Well, that’s too much.” We don’t know if they’ll figure it out. [laughs] He agreed. He was like, “You’re right, the image is so strong here, we can reduce some of the words.”

Filmmaker: You were approached by Nicole Kidman’s company about this project, correct? Had you been approach for similar type of director-for-hire gigs in the years after Hedwig? What about this one stood out to you enough to make you embark upon it?

Mitchell: Hedwig opened up millions of opportunities and I was very diligent in saying no a million times because I was older and less lured by the limelight. I knew each and every project would take years. When you’re going through that painful process of making a film over many years, you better love it. You better not being doing anything just for a career move or just for money.

Luckily I had a cheap apartment and I still do. My rent stabilized apartment is the source of my fulfillment [laughs] indirectly, because I was able to only do things I loved. I read the script because my agent sent it to me. He said “they’re looking,” the economy had just crashed, an early version of the project had collapsed. I read it and I immediate thought, “I want to do this, I’m moved by it, I think it’s necessary, I think it could be the Ordinary People of our generation that people look to for comfort.” Nicole Kidman was perfect casting for this role. She was developing it, so I knew she would protect it. I reached out to her producer, who wanted to do Hedwig years ago, when he was with Robert Redford’s company. He loved the idea, he thought it was unexpected, and that with, as he put it, “a warmer director working with a cooler script”, the emotion would remain high but behind a restrained style. I talked to Nicole on the phone for 20 minutes, told her all of this, how I felt about it, how I imagined the direction being invisible and she went on an impulse and said, “Let’s do it.” We were shooting five months later. It was really weird.

Mitchell: In Shortbus the actors were much less experienced and in a way that was necessary and an advantage to the story I wanted to build which was going to be built around improv and episodes from the actors lives so they would feel more comfortable in these sexual realms. We worked together for two-and-a-half years. Those people became very close friends. Working with Nicole Kidman and Aaron Eckhart, I had two days of rehearsal. Both of those periods were exactly what we needed for each project. It was a little nerve-wracking for me because I’m a theater person, I like to hang around with the people alot before we do it, but that just wasn’t possible with their schedules. They’re used to it. I was reminded of my acting days, where you can over rehearse things. Especially with a project like Rabbit Hole, where scenes are super-intense and you’ve got to capture this lightning in a bottle. So we never rehearsed a scene full out until the camera was rolling. We shot all the rehearsals and I used alot of tricks to keep the acting fresh. Multiple cameras, keeping the camera moves simple, recording off-camera stuff, shooting rehearsals, shooting on the Red Camera which allows you not to have to cut as often, which can help the momentum of a performance. So all those things I understood from working on Shortbus. I just translated them into a different kind of film.

Filmmaker: Frank DeMarco has shot all of your projects. How do you prepare with him? Do you watch films, look at art, talk things through?

Mitchell: We never looked at many films for this. We just knew that there would be fewer shots which would lead to a more immediate focus on performance. What are the fewest number of shots we can use that still have great composition and power but don’t call attention to themselves? Shooting on the Red was actually our producer’s idea for budgetary reasons. I resisted it at first as did Nicole. Then we realized the advantage for performance which was being able to roll theoretically forever if you have big enough hard drives. That really helps when you’ve got these kind of scenes. Doing three takes in a row can really help build the momentum.

With Frank it’s so comfortable, he’s worked on everything I’ve done, videos, commercials, films. He’s really good with actors. We keep a light set, humor going. He’s more laid back than I am. I get panicky, saying we have to move on and he’ll calm me down and remind me that thinking about the future doesn’t always help the present. He shot on old lenses to soften the look of the video. Even on the Red Camera, which is better than most, there is a digital harshness that we tried to avoid.