Here are some articles of interest I’ve sent to my Instapaper this week.

At Script Shadow, Carson Reeves lists the 10 ways he knows he’s reading an amateur script. All of these are quotable, but here’s one:

BORING ON-THE-NOSE DIALOGUE – This is probably the biggest clue that you’re dealing with an amateur. The dialogue is really straightforward and boring. Characters say exactly what they mean: “You make me so angry!’ Characters get way more specific than people in real life would: “I’m going to head over to get a cheeseburger at Portillo’s and then call my mom.” (instead of “I need a chili dog before my stomach starts eating itself.”) There’s no nuance or slang. People talk like robots. There’s no subtext or conflict. Characters aren’t hiding anything from one another (which always makes for interesting dialogue). You need to understand all of these things in order to get that dialogue to pro level.

You may have read about Goldman Sachs’s private investment in Facebook. At the Baseline Scenario, Simon Johnson asks, “Why is the U.S. Taxpayer Subsidizing Facebook — and the Next Bubble?” Pointing out that Goldman Sachs is now a bank holding company and has unlimited access to the Fed discount window, Johnson goes on to write:

Social networking firms should be able to attract risk capital and compete intensely. They do not need subsidies in the form of cheaper funding (seen today as a more favorable valuation for Facebook) or in any other form.

Social networking is a bubble in the sense that email was a bubble. The technology will without doubt change forever how we communicate with each other, and this may have profound effects on the nature of our society. But investors will get carried away, valuations will become too high, and some people will lose a lot of money. 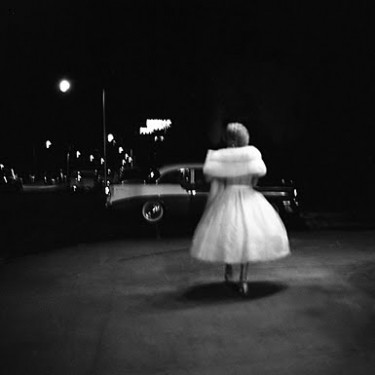 A blog has been created to highlight the work of recently discovered Chicago street photographer Vivian Maier, whose striking black-and-white images where shot from the 1950s – 90s. There is also a Kickstarter campaign for Finding Vivian Maier, a documentary on the artist. With two months left to fund, it’s already more than doubled its $20,000 goal.

Chuck Tryon visits the Universal Theme Park and considers it within the context of transmedia storytelling. An excerpt:

When visting Orlando (or Universal Studios in general), it’s easy to see why authors might be tempted to embrace Jean Baudrillard’s arguments about simulation: the parks and the city itself seem to be entirely populated with artificial representations. The Harry Potter section of Islands of Adventure almost seamlessly simulates the powerful blend of past and present Britishness found in J.K. Rowling’s novels and in the movies. Artificial snow drapes the rooftops of some of the shops (or shoppes); fake owls hover in one of the restaurants; and street vendors hawk (extremely tasty butter beer). The ride simulations, especially The Mummy and Spider-Man, create the sensation of actually inhabiting the worlds of the movies and graphic novels, allowing riders to feel the effect of swinging from building to building or of descending deeper into the hidden chambers alongside of Brendan Fraser….

But I think we lose quite a bit of specificity in viewing these spaces as mere simulations or as ideological ruses designed to lure in tourist dollars, especially the international tourists who filled our hotel to capacity (rather than visting other parts of the world)….

At Venturebeat, Peter Yaren notes that Netflix “20% of U.S. nighttime internet traffic” figure and asks, “Will 2011 Be the Year Online Video Unravels the Internet?”

Hammer to Nail picks their to 13 films of 2010. This list will surprise you.

This is very strange and cool — “Dead Drop,” from Berlin based media artist Adam Bartholl. It’s a kind of street art that blends the virtual with the physical. From the site:

“Dead Drops” is an anonymous, offline, peer to peer file-sharing network in public space. USB flash drives are embedded into walls, buildings and curbs accessable to anybody in public space. Everyone is invited to drop or find files on a dead drop. Plug your laptop to a wall, house or pole to share your favorite files and data. Each dead drop is installed empty except a readme.txt file explaining the project. ‘Dead Drops’ is open to participation. If you want to install a dead drop in your city/neighborhood follow the ‘how to’ instructions and submit the location and pictures.

Dead Drops ‘How to’ – NYC from aram bartholl on Vimeo.

Brian Newman’s “11 Things on My Mind for 2011” has fallen into the most dangerous category in my Instapaper — that of long, thoughtful articles that require long, thoughtful responses. In the event that I don’t get to mine, here’s the link. And here’s his number one:

Will the film industry start to take policy seriously? I doubt it. Policy turns people off, but if we don’t pay more attention and get active in these debates, the possible future for indie film might get turned off. It’s hard to imagine a world where the internet no longer works like it does now, but take one look at this graphic of what the industry wants and you quickly get a sense of what could become of the internet. This will be the year that this story gets framed to the public in a big way. The Right is already trying to paint the FCC’s recent ruling as “regulating” the internet. Filmmakers are story tellers. We need better stories about why this issue is important. There’s quite a role here for creatives, and I hope a few of them take this issue head-on in 2011.

At Bad Lit, Mike Everleth urges filmmakers to put good cast lists online. And now that you’ve finished reading my list of links, head to Mike’s blog and read his, which are a permanent fixture in my RSS. Among his links this week, Saul Ostrow’s Art in America profile of filmmaker (and Filmmaker “25 New Face”) Brent Green.