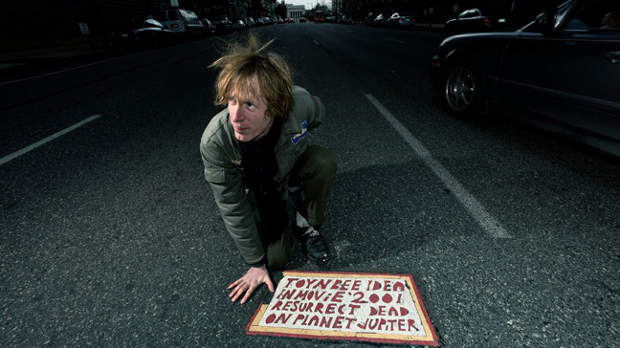 by Mary Anderson Casavant
in Sundance Features
on Jan 24, 2011

There are few professions in the world that demand more from their practitioners than documentary filmmaking — most filmmakers spend years (if not lives) toiling away in obscurity, with little keeping them going beside the faith that theirs is a story worth sacrificing everything for.

Sundance newbie, Jon Foy, is certainly a man of faith — his feature debut, Resurrect Dead, was entirely self-funded by a series of odd jobs. When he got the call that the film he’d been working on for five years was going to be at Sundance, he was working as a house cleaner. The story of one man’s obsession, Resurrect Dead follows Justin Duerr, an artist determined to find the story behind the Toynbee Tiles, a series of cryptic messages that have been found embedded in the asphalts of city streets everywhere from New York to Buenos Aires.

Filmmaker: Which came first, your interest in this story or the idea to make a film?

Foy: I haven’t thought about that question… The story is about a mystery, who is making these tiles and why. I was told about the tiles by someone I worked with in 1999, and I met the main character of the movie in the summer of 2000 under sort of weird circumstances. It’s a long story —

Filmmaker: I’d love to hear it.

Foy: I was staying at a friend’s apartment, and we pranked this other friend of mine, pretending to be the person who made the tiles. Later that week, I was sleeping on the couch of the person we pranked, and the phone rang. The call went to the answering machine, but then someone in the house picked it up, and that was Justin. He thought the prank call was the real thing. He was serious. I realized I hit the wrong target and went up to his room and apologized to him. He said he didn’t mind and then pulled out his materials and showed them to me, and right away, it just kind of clicked. I told him right there that this was going to be a movie, but I didn’t start shooting it until 2005 after I dropped out of school and moved back to Philadelphia.

Filmmaker: So, in the end, the story is more about Justin than about the tiles.

Foy: My sense is that some people are interested in the tiles, but you care mainly because Justin cares. Justin is obsessed with solving this mystery, and we’re right there with him.

Filmmaker: I haven’t been able to see the film, but I’ve heard there’s some sort of reveal you were trying to protect until Sundance. How have you been able to keep the reveal under wraps?

Foy: It’s a real life mystery. You can’t go on Wikipedia and look it up. We realized very early on that we wanted to keep [the film] under wraps, which wasn’t hard because it was made on a lo-fi level for years. Even my girlfriend didn’t see it for years afterwards…. I think it’s amazing that the mystery is going to stay intact until Sundance. People always think we’re making it up, but we’re not pranking. We wouldn’t waste people’s time. We’re not making tiles. Justin has made copy tiles, but we’re clear about that in the film.

Filmmaker: Do you have distribution of any sort yet?

Foy: We’re going in cold. This is my first film, and it’s also my first film festival. There’s no distribution deal or anything, although Josh Braun from Submarine is repping us. It’s funny because you don’t think things like this could ever happen. I spent five-and-a-half years on this film, self-funding it as a house cleaner and doing other strange things to make money, like [participating in] drug studies.

Filmmaker: So, Sundance was the first place you submitted it to?

Foy: Yeah, actually. I almost didn’t. I saw the Sundance deadline was that day, and it was almost evening, and I was really tired from a long day’s work. I called my girlfriend, and she said, “Are you sure you missed it? What if you burned the DVD right now? So, I got off the phone, burned the DVD and sprinted down to the post office and overnighted it.

Filmmaker: You still sound a little shocked that you got in.

Foy: It was shocking to an extreme. I had been cleaning a house that day, my bike was broken, and I was walking home. I checked my voice messages because I saw I had a missed call…I didn’t know what to think. I didn’t want to imagine good things because I didn’t want to get that idea in my head and have it be not true. I called John Cooper at the Sundance Institute, and I’ll never forget this — he said, “I loved your movie. We all loved your movie.” I was out of my mind for a while…. When I first got home, I went straight to my room and grabbed a book off my shelf because I had heard that you can’t read a book in your dreams, and so I wanted to make sure I could read the words and sentences… Nothing like that has ever happened in my life.