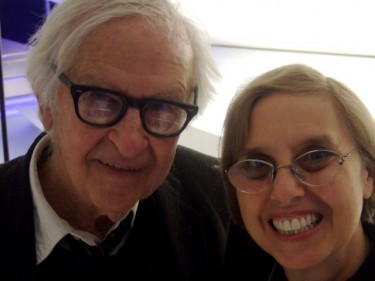 At an awards ceremony at the Museum of the Moving Image in Queens, Cinema Eye handed out honors to the best of this year’s documentary films. The top award, the Outstanding Achievement in Nonfiction Filmmaking, when to Banksy’s Exit Through the Gift Shop, produced by Jaime D’Cruz. Laura Poitras was named Outstanding Director for The Oath, and Jeff Malmberg Outstanding Debut for his Marwencol. Matt Porterfield’s Putty Hill won the first Filmmaker-sponsored Heterodox Award. One of the most moving moments of the night was a tribute to editor Karen Schmeer, who was killed last year in a hit-and-run, and one of the most inspiring was the Legacy Award given to Albert Maysles and Muffie Meyer. Maysles, who is 84, quipped, “There must be someone in the audience with money for my next 25 films. (The highlight of my evening was taking their picture and having Maysles correct my frame.)

Last night’s was my first time attending the Cinema Eye Honors, and I loved the mixture of awards-show ceremony and warm-hearted community gathering. A.J. Schnack and Esther Robinson were surprisingly good as comedically bantering hosts, zinging punchlines that I’m sure will be somewhat obscure to those watching on the Doc Channel later in the month but which everyone in the room laughed at. Quite often, though, both they and the presenters spoke personally and warmly about the psychic rewards of the often punishing profession of documentary film. (Robinson at one point compared it to drug addiction in that you lose your money and your youth while pursuing it.) The most memorable of these comments was from the late George Hickenlooper, as remembered by Morgan Spurlock. The Super Size Me director recalled a dinner with Hickenlooper a couple of weeks before he died. “How lucky we are to do what we do with our lives,” Hickenlooper said to him. They were words that resonated deeply to all of those in the room.

The complete awards list is below. For more on the Heterodox Award, wait for our Spring issue, in which the five jurors will discuss their decision and the issues raised by the nominees.

Exit Through the Gift Shop

Exit Through the Gift Shop

The Sound of Insects: Record of a Mummy

OUTSTANDING ACHIEVEMENT IN AN INTERNATIONAL FEATURE

sponsored by The Economist

Joan Rivers: A Piece of Work

The Autobiography of Nicolae Ceaucascu