by Scott Macaulay
in Sundance Features
on Jan 21, 2010 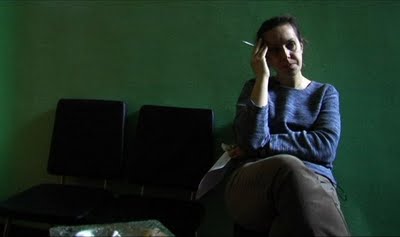 Robin Hessman’s My Perestroika is a documentary that shows modern-day Russia from the inside out. Five Russian adults reveal their personal histories through interviews and home movies, talking us through their childhood in school together during the die-hard communist Brezhnev years of the 1970s, through Gorbachev, the collapse of the USSR, and, finally, the coups, oligarchs and wealth transfers that are shaping Russia today. Borya and Lyuba, a married couple, teach history at School #57, which their teenage son also attends, and the film begins in their modest apartment, the same one Borya grew up in. Olga, the prettiest girl in school, marvels when she finds out that the life she leads — with food on the table and a lake house to spend the summers — is technically below the poverty line. Andrei, the only one who has managed to move out of his parents house and into a luxury condo, opens his 17th luxury men’s clothing store during the course of the film. Lyuba hides her face remembering how she used to salute the television when the national anthem played; Ruslan shows us music videos from the punk band he formed in the 1980’s.

What is most remarkable about My Perestroika are not the poignant and surprising revelations about life in Russia, but the extreme level of intimacy that Hessman maintains in each interview. Though the majority of these are sit-down, single camera interviews, they have the candor and spontaneity of verite footage. Her insight into the subject (and fluent Russian) stemmed from a fascination with the Soviet Union since grade school and almost ten years living in the country. Hessman set out to make the film in three months and ended up filming for five years, but one thing she knew from the beginning is that no history has a single truth, and even a million voices couldn’t tell the whole story.

Filmmaker: How was the process of making this film different from how you imagined it would be?

Hessman: It definitely took longer than I expected — I look back at my early prospectus which has all these confident assertions about how we were going to shoot for three months, have a co-production at this time, and the we’ll be financed, and then we’ll premiere. Of course, I shot for five years, and was raising money through the whole process. We found most of our financing in Europe, whereas I thought it would all be U.S. investment.

Filmmaker: You can’t predict the future just by writing a prospectus, I guess.

Hessman: One of the greatest wisdoms I took away from living for so long in Russia had to do with exactly that, actually. Here’s the metaphor: if life is an ocean, the general American ethos is, we’re in our own little motorboat, and we decide where we’re going to go, and then we go there. That’s how I raised: pick a goal, and go for it, and don’t let anything take you off course. Russians on the other hand, they’re in a sailboat, so if life takes them left, they go left. Something you learn very quickly trying to do business there is that making plans in Russia involves a lot of conversations like, “Well I don’t know if I can make it next Tuesday, because who knows what’s going to happen in our lives tomorrow? Let’s talk on Tuesday if you want to do it on Tuesday.” Although even that is changing rapidly.

Filmmaker: One thing that really struck me was the stories in your film, and the way these people’s conceptions of who they were and what they wanted changed so drastically as they grew older. Whereas a U.S. education is all about teaching kids to identify their own particular brand of specialness, your subjects were strict and passionate conformists as children, and they talk about it being a blissfully happy time.

Hessman: Right, one of the things about being a kid in the USSR was that you were not supposed to stick out; you had to conform. They told me stories of the class collectively admonishing one student because his tie wasn’t straight. But there are also really positive aspects of [socialist culture] that I think people miss in some ways. For example, the Meyerson’s students go to Greece every year. All of the parents and alumni pool their money to make sure every child can go – some give more money, some give less. Whereas I know that in the US, if a parent can’t afford a trip, that child just stays home. I do wonder if the next generation of Russian parents will be so comfortable thinking of their child’s class as a collective, because people have to work much harder and for much longer hours today to support their family and that will probably make them less inclined to give to the community. These contradictions and pluses and minuses are what I wanted to show with the film.

Filmmaker: Would you say that they’ve developed a different sense of themselves through their politics as well?

Hessman: When these people were growing up, there was a sense that the State and its politics existed on another level of life, so every day people just focused on their daily lives. You can’t affect the State, so why get involved in it or even think about it very much? So people focused on their friends, music, literature, family; everyone had extensive hobbies like mountain climbing and photography. Then under Gorbachev, the personal and the political began to intersect. There was a reason to get engaged, and a lot of people became very [politically active.] Today, I think people have swung back to feeling like there’s no use getting involved in politics, and everyone is again focused on their own life and their own family. The difference is that now it is a lot harder to make a living, and you have to spend a lot more time at work, so there isn’t any time for the friends and the literature and the music. You’re just trying to do the best you can, and feed your family.

Filmmaker: How did you arrive at the format of the film, which is interview-based and without narration? What were some of the challenges of that structure?

Hessman: Between these five people there are so many different experiences and opinions about what happened; having a narrator would make one point of view legitimate and not another. It would give the impression that there’s an objective truth about what happened and how people feel about it, and there just isn’t one. We also had the Soviet archival footage to get ideas across, the subject’s home movies, and of course the interviews themselves. The home movies to me are incredibly important, because they were made with no agenda other than to record daily life for future generations. I wanted to bring the viewer into the private visual world of the 1970’s and 80’s. One problem we had with the archival footage was that a lot of it is black and white, even from the 1990’s. American viewers thought it was from World War II so sometimes we had to put some identifying dates.

Filmmaker: How did you figure out how much exposition was needed, because I’m sure every viewer’s knowledge of the country is so different?

Hessman: It’s definitely a careful balance — enough information that people wouldn’t be lost, but to make sure the history didn’t overshadow the characters. The Sundance Lab helped a lot, helped identify what the individual story arcs of each of the characters were. And we also played a lot with the lower third of the screen, identifying footage. We’d have a clip of kids with gas masks on and it would say, “Teen Civil Defense Training, Early 1980s.” But as the film developed, I felt that all the editorial impositions wasn’t helping. You didn’t need to know that this was civil defense training, it’s more important to just see and hear what was going on around them at that point in their lives.

Filmmaker: Can you talk about your approach to interviewing?

Hessman: Very early on I realized that I wouldn’t be able to use another camera person. For one thing, the apartments we were shooting in were just too small to fit in more than one person. But much more than that, the atmosphere in the room completely changed when I wasn’t alone with [the subjects.] I spoke Russian, I had lived there, so there was a shared history and understanding that a journalist visiting for two weeks could never have. Because when I moved to Russia, all the friends I made were my age, college age, so I had heard so much about what their childhoods had been like that I knew the books, I could sing the songs, so we had a lot of mutual understanding. But the most important thing was time. I’m so happy that things didn’t go as quickly as my first prospectus said it would; I spent five years filming these people, and if I had only filmed them for three months, I can’t imagine the interviews would be as warm and as rich as they are. [Two of the subjects] were historians, so they were used to examining all of this, although maybe not from the perspective of personal anecdotes. Russians can sit in the kitchen and talk about the meaning of life until three in the morning, so I don’t think it was a difficult experience for them to talk about this stuff, but I don’t think anyone had ever asked them these questions.