by Scott Macaulay
in Distribution, Filmmaking
on Aug 3, 2011 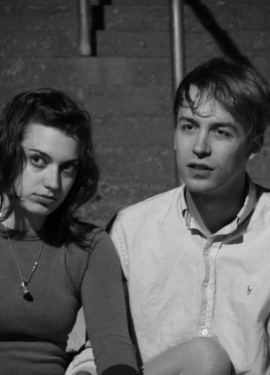 Memphis-based filmmaker Kentucker Audley (Team Picture, Open Five), selected for Filmmaker’s “25 New Faces” list in 2007, is releasing today online his new film, Holy Land (pictured here, with stars Bunny Lampert and Cole Weintraub), and with it a platform for fellow directors working in the no-budget trenches. The site is called “No Budge Films,” and it is described simply as “a place to watch no-budget films… Post your short film or feature // for a short run or indefinitely.” Why such a simple site? “Because most films don’t get distributed + it’s cool to give away your film for free + you don’t owe anyone money because you raised your budget on Kickstarter,” Audley writes in his site’s mission statement.

After Audley told me about the site, I asked him a couple of questions which he answered by email. Our conversation is below.

Filmmaker: Why did you decide to become a de facto distributor?

Audley: In the last couple years, I’ve seen so many deserving films fall through the cracks. There’s this film Wishful, Sinful made by this filmmaker Brad Bores. Nobody knows about it but I saw it last year and it’s incredible. I wanted to help people find it but I was in no position to do so. Brad posted the film on Vimeo earlier this year and I reblogged it, but that was all I could do.

I was already interested in internet distribution. Last year we released our film Open Five online and it was a success. We got great press and 5,000 views in three weeks — more people than would have seen it at three years worth of film festivals.

I wrote down this list of reasons to start No Budge when I began the site in February.

-to understand the world of film distribution better

-to establish and develop relationships with filmmakers

-to find filmmakers I wanna work with

-as an alternative to DVD or theatrical distribution

Filmmaker: Who is the audience for the site? And do you think people want to come to a site that’s specifically devoted to no-budget films?

Audley: It’s a small audience but there’s a bigger one for great films in general. And it just so happens that some of the most interesting films right now are being made for nothing. I feel a growing ethos surrounding making movies on your own, but that is not being reflected as much on the distribution end, i.e., there are great, challenging, and deserving films with no home.

Anyway, I’m assuming the audience will be small. The films I gravitate to are not crowd-pleasers. But No Budge already has a loyal cadre of viewers, and I trust more cinephiles will trickle in and be satisfied to find a distinct and personal place to watch films.

I have nothing against iTunes or Netflix, but they are obviously not on the lookout for the most raw and personal films, and neither are the big aggregators/distributors, unless they have a profit-inducing hook. At this stage, No Budge isn’t a business endeavor so there’s nothing financial at stake. (However, there is a way for filmmakers to make money with No Budge, but that’s through a third-party site, Dynamo, which embeds the films and charges a rental fee.) I love keeping up with filmmakers, and I can dedicate the time because it’s very simple to maintain — it’s just a Tumblr page, and the film posts are basic.

If you’re an unknown filmmaker with a slow or difficult film you don’t have many options. No Budge is another option. And there is no committee, and there’s no business discussions, and it’s a quick process. If I like your film enough, I will put it up next week, not next year.